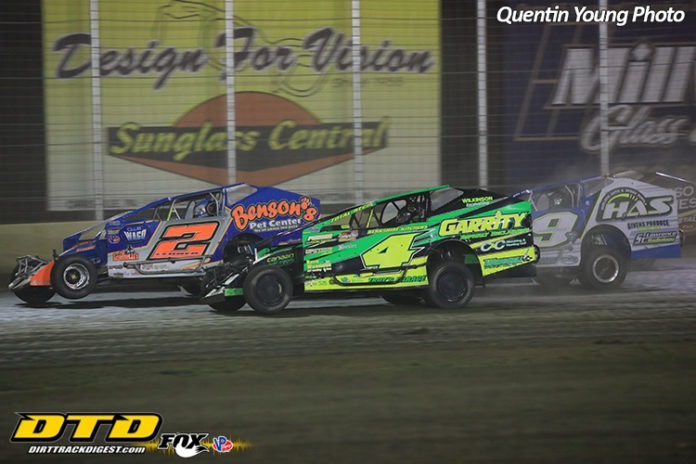 The Super DIRTcar Series made it’s 2020 season debut Wednesday night at the new Bridgeport Motorsports Park and the large crowd at hand certainly saw a great night of racing. Not only did the SDS Modifieds put on a show in their 100-lap main event, but the Speedstr’s who served as the warm-up event put on an incredible race with Steve Drevicki winning by inches over Jared Silfee.

The division everyone was there to see were the cars and stars of the Super DIRTCar series and boy they did not disappoint. Even though the winner was Stewart Friesen, which I am certain was not a surprise to anyone with the season Stewie is having, there were other good performances from other drivers.

Making a surprise visit to Wednesday’s SDS race was the driver from Sheffield, Mass. Having to qualify through the consolation race, Bachetti kept the Garrity Asphalt No. 4 smooth and was able to bring home a solid fourth place finish.

“We were planning on running Middletown on Tuesday so we figured we might as well come down and check it out,” mentioned Bachetti while getting cleaned up and standing by his hauler afterwards. “It was a hot night, but it was neat to come down here tonight and check this place out. It was a good run for us.  The team made all the right calls. We came in the pits and changed some stuff around and it was all the right stuff.  We were able to get up to fourth and get out of here unscathed.”

Bachetti went on to talk about the new track here at Bridgeport Motorsports Park.

“I thought the track was pretty cool, I think the more they work with it the better it will get. It just needs a little more grip other than when it rubbers up like it did tonight, but once they get that figured out it will be really racy.”

Bridgeport Speedway turned Bridgeport Motorsports Park has always seemed to produce good finishes for the driver out of Potsdam, N.Y. Maresca made the long haul from the World Finals in Charlotte, NC last November to compete in the 5/8’s mile finale the following day and brought home a podium finish. Fast forward to 2020, and once again it was Maresca having another solid race, albeit on a completely redesigned track.

Starting in the 14th spot, Maresca held steady all race and at the end of the 100-lap race found himself finishing a solid fifth. Maresca was also one of the very few who ran all 100 laps with the same right rear tire.

“it was a pretty good night, obviously it was hard on tires. We ran one 400 tire all night and made it last all 100 laps,” cited a happy Maresca as he talked about his race. “We’re pretty happy with how it went.  A couple of those guys took the opportunity to get tires, but we decided to just tough it out.  I thought we had a really good car. I think I had the car to run with the leaders, but we couldn’t really race as hard as we would’ve like so we could save the tires. I was really babying it there at the end just trying to hang on to it.

“It was good to finish fifth.  This was our first race back in a big block since Florida and I was glad to be back in it. If I had to do it over again, I probably would’ve come in between lap 40 and 50 and change tires, but once we committed to staying out I just had to ride it out with what I had.”

I also asked Maresca what he thought of the new Bridgeport track layout.

“The new Bridgeport is pretty cool! It’s a really cool place to race at, I mean for it to rubber like it did and still race that good was nice. Most places when they rubber up like that don’t race good at all and the fact that it rubbered up here tonight and you could still race multiple grooves was pretty dam cool.”

Mahaney and Crew Work Hard for a Ninth-Place Finish

It certainly was not the finish that Mike Mahaney and Adirondack Auto No. 35 team had envisioned for the night.  When all was said and done, it was a solid effort. Coming off a second place finish the night before at the Orange County Fair Speedway, Mahaney had high hopes coming into the race at Bridgeport.

The night did not start out too well for the team when their primary big-block car for the night developed engine issues early in the night forcing them to pull out the backup car and ready it for action. By virtue of having taken no time during time trials, Mahaney was forced to start from the rear in his qualifying heat race. The Elizabethtown, N.Y., driver was able to work his way up to a solid third-place finish in his heat putting himself into the redraw for the main event.

Mahaney had a good redraw and found himself starting third in the feature.  He was running solidly in the top five until a myriad of tire troubles started to unwind. Mahaney ended up making multiple pit stops during the race, but kept at it and after DIRTcar Series starter Dave Farney waved the checkered flag Mahaney found himself finishing in the ninth position. It was not the finish the team was looking for, but considering all the hard work the team had put in during the night especially during the feature it was an okay finish.

“It was a pretty hard night for sure, it was hard on my crew,” explained a tired and hot Mahaney after the race. “We had a motor problem in time trials and had to switch cars then we had to start last in the heat and made it to the redraw. Started third in the feature, so that was great, but we definitely made the wrong tire choice by not going hard enough but that wasn’t why I got my flat. There was contact and I think it was with Sheppard because I got a left rear flat and he got a right rear flat at the same time. I wanted to change the other tires at the same time, but they have a rule when you bring out the yellow you can only change the one tire.  So when we come in with a right rear flat we can only change that tire. We had to wait for another caution to come in again and change all the tires because we knew we didn’t have the right ones on. So, we finally got all the right tires we wanted on about lap 60 I think so then we were able to go forward. After all the hard work and to finish ninth, we are very happy with that. I would’ve liked to have had been able to get the right tires on earlier so other than that it was a good night.”

Like I asked the other drivers, I wanted to get Mahaney’s perspective and thoughts on the new track.

“Bridgeport was really cool; the track was really racy in the heats. I would have liked the feature to have been like that, but you could still race, it was just really hard on the tires. There is a lot of room to pass here either way and I had a lot of fun out there tonight.”

Kudos to Bridgeport Motorsport Park owner and promoter Doug Rose for sticking with it and hosting the first SDS race of the season and also for going around and visiting with all the drivers and teams’ post-race to thank them for coming.

I can be reached for any questions or comments at dirtracefan25@hotmail.com or on Twitter @dirtracefan25