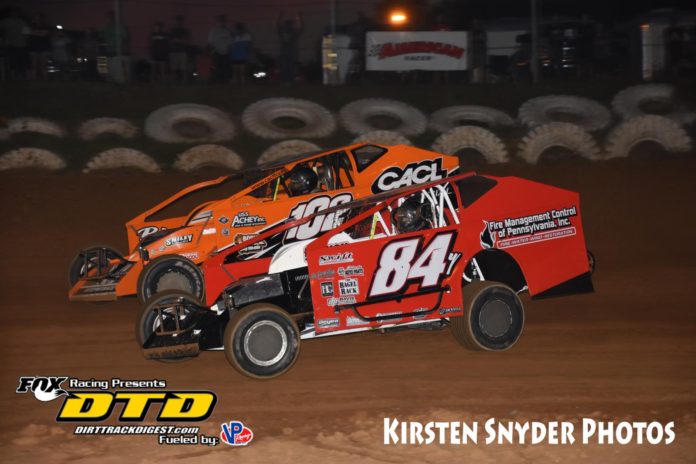 With only the month of August and the annual Coalcracker weekend left in this COVID-19 shortened season, there is a new driver looking to lead the way at the Big Diamond season. For the past decade or so at the Minersville, Pa., dirt oval names like Craig Von Dohren, Duane Howard, Rick Laubach, Ryan Godown, Billy Pauch Jr., and Jeff Strunk are the names that come up when people talk about Big Diamond.

Right now, we could be seeing a changing of the guard in the making. Don’t get me wrong, the above-mentioned drivers are still very much in the mix when it comes to winning weekly at Big Diamond with the exception of Godown who is not a regular competitor at Big Diamond this season. There have been young drivers over the past few years that have shown flashes of brilliance like Jared Umbenhauer and Brett Kressley Both of those drivers have picked up a win or two but have yet to become weekly contenders.

Which brings us to our new star in the making, young Alex Yankowski. Yankowski who just turned 16 on July 23rd has been the talk of the track the past two weeks. On Friday, July 24th, Yankowski won a thriller at the speedway after a three-way battle with Kressley and Jordan Henn to win his first ever modified feature. Wanting to prove that win was not a fluke, the Covington Township, Pa., wheelman went out this past Friday and dominated the feature for his second win in as many weeks. To make those wins even more legit is the fact that Yankowski has won those races starting in eleventh and twelfth. Starting in those spots forced the young driver to go by some of Big Diamond’s toughest competitors on his way to the taking home the checkered flag.

“We’ve been really fast since we switched to these Bicknell cars,” said Yankowski as he talked about his win post-race. “We won here last week and went to Bridgeport and blew the motor so that was a big kick in the stomach there. But the guys worked hard to swap motors around and here we are, so it’s been good. Without my guys, this would not be possible. They give me such a good piece and our program is getting more and more organized all the time. It is just good when everybody is in a happy mood and were winning so that makes it much easier here at Big Diamond and honestly wherever we go. So yeah, everyone’s happy right now.”

Last Friday alone, Yankowski had to start behind the big three of Pennsylvania Craig Von Dohren, Duane Howard and Jeff Strunk plus throw Mike Gular into the mix. That did not stop the driver who track announcer Dino Oberto refers to as “Kid Rocket” as he worked by all of them to earn the big $4,000 payday. It was a well-earned win for Yankowski who now must be considered one of the favorites for the season ending $17,000 to win Coalcracker 72.

“It’s crazy when you think about it, I think it was back in 2011 when Frank (Yankowski) was running a Sportsman here and I was in the stands with my grandfather and those were the guys who were getting done then. Drivers like Billy Pauch Jr, Craig (Von Dohren), (Jeff) Strunk are who were winning back then and still are today.

“Jeff (Strunk) is the one driver who I’ve looked up to a lot the past couple of years on how he runs his program and how he handles himself. I think over the past two years I’ve gained the veterans respect and we all seem to have respect for each other on the track. There are a couple of guys who I’ve had my bumps in the road with, but at the end of the day, we are just racing and racing hard. Nobody wants to tear their stuff up and each other’s stuff up, that’s for sure. I think it is the young guys who come in and start wrecking stuff and tear up their own stuff along with other guys stuff that veterans don’t like to see. So, the fact that we’ve been staying out of trouble helps gain that respect you want from the veteran drivers.”

Gular Charges Towards Title with Consistency

With some good finishes last year towards the end of the season and Big Diamonds switch to gas only for 2020, Mike Gular and his Terry Fanascht owned team made the decision to call Big Diamond Speedway their Friday night this season. The ability to accumulate points for the American Racer Tire title was also part of the reasoning for the decision.

As of today, that decision looks to be a sound one for the No. 2A team. Sitting second in the Modified points race after last Friday only 17 points behind, Gular has done it with a model of consistency. The team has only been able to garner one checkered flag so far, but other than the team’s one DNF Gular’s worst finish of the season has been a sixth. The Boyertown, Pa., driver has shown patience when needed but not afraid to get aggressive when it is called for. Last Friday night, Gular charged through field to get up to second but had nothing for winner ankowski having to settle for the runner-up spot.

“It was a good night for us, we started 10th and fell back to 12th I think, and then were able to work our way back towards the front,” mentioned Gular while his car was going through post-race tech. “The track was good tonight.  It seems like the top was the prominent lane tonight, not sure where everyone else was running but this place usually has two good lanes you can race in. Once in a while it’s gets one-laned up there on top, but we were still able to get back up there. The cars been good for us all year but we’re still digging trying to get that extra speed out of it that we need to get another win.”

Rick Laubach would be the first one to tell you that 2020 has been a struggle for him at Big Diamond. Running the Dick Biever No. 14s, the year did not start out too well as the team struggled to find speed. The past couple of weeks the “Quaker Shaker” has started to return to form with a solid second place finish in the first of two twin twenties back on July 17th and this week ran a strong race to pick up a third place finish. It hasn’t been the year Laubach was hoping for, but he feels like it’s starting to come around.

“It’s been getting better like I said, we found a problem and now we are getting it right again,” cited Laubach standing with his son Matthew and fiancé Tara after loading up the car into the trailer. “We’ve had trouble from opening week until now and we also needed some racing luck which we had tonight. I was never able to start on the inside which is where you needed to be tonight, but I had some luck starting on the outside tonight which was a good thing. This car is different for me.  I just started driving for Dick Biever this year and he just didn’t give me a blank check. He gave me all his stuff and I had to learn what it took to make it good for me and believe me it was different from what I had on my other cars and I won’t give up until I get it right.”

The name Brightbill is synonymous with success at any track in the Northeast, Big Diamond included as Kenny Brightbill is regarded as one of the greatest Modified drivers of all-time here in the Northeast. This season at Big Diamond, it is another Brightbill making a name for himself in 2020. Kenny’s son Brad Brightbill has become the man to beat any time the USS Achey Open Sportsman division in on the track. This past Friday night, Brightbill once again took home the checkered flag for his division leading third win of the season. Brightbill has had success before at Big Diamond but nothing like what he is experiencing this season.

“This is the best I’ve ever run here, and I don’t even know exactly what’s making that happen,” mentioned Brightbill. “It’s pretty much the same car, with the same set-up we ran here last year. It just seems to like this track this year for some reason, this car just goes around the bottom.  If I had to pass somebody around the top, I don’t know what would happen. As long as I could hug the tires, I could sneak past them. Not sure if I had to pass them around the outside, it would’ve worked out so good.”

Ritchie Hitzler made a rare start at Big Diamond on Friday night in the Geezer Fanelli No. 9. Unfortunately for Hitzler he took a hard hit in his heat race resulting in a trip to hospital for a possible leg injury. I contacted Fanelli on Saturday morning and he told me that Hitzler was okay but sore…

Duane Howard and the Norm Hansell No. 357 continue to struggle at Big Diamond. Howard looked good early in winning his heat. The feature proved to be another story as Howard charged towards the front early on but ultimately faded when it looked like the handle went away in a big way leaving the team with a disappointing ninth place finish…

Kevin Beach Jr looked strong this past Friday, leading the early portion of the feature until something broke on the No. 17x. Beach will be one to watch in the upcoming weeks for sure…

The new for 2020, Red White and Blue Autos Crate 602 Sportsman division has proved to be an extremely competitive class. There have been four feature events this season with four different winners. Danny Buccafusca is last driver to reach victory lane this past Friday joining Cody Manmiller, Joey Vaccaro and Joel Smith as feature event winners…

The points race in the Insigner Performance Modified division is shaping up to be a nail biter with only 26 points separating the top three of Jeff Strunk, Mike Gular and Craig Von Dohren. Alex Yankowski, who has won the past two features, is also rocketing himself towards the top. Currently fourth place in the standings, Yankowski is a driver who could be in the mix real soon…

This Friday, August 7th at Big Diamond will be the annual Fayash Memorial along with a Pink Out to support cancer victims and survivors. The modifieds will go 25 laps for $3,000. The Open Sporstman will race 20-laps for $1,157 as will the Crate 602 Sportsman. The racing card will be filled out with Roadrunners and the Street Stocks…