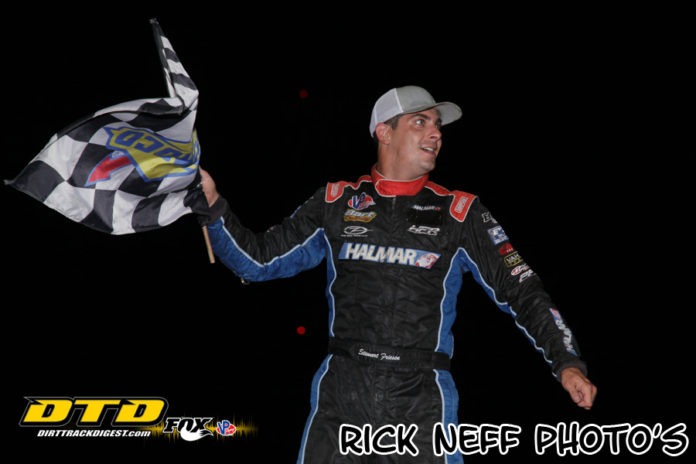 If you think that the troubles Stewart Friesen is having this season racing in the NASCAR Ganders Outdoor Truck series is affecting the Halmar No. 44 Modified team, you couldn’t be further from the truth.

As you know, the Sprakers, N.Y., driver has been on quite a tear this season aboard his Bicknell chassis, Performance by Billy the Kid powered Modified. After Tuesday night’s win in the STSS South Series Diamond State 50 at the Delaware International Speedway Friesen, is an amazing 21 for 42 in Modified races this season. Winning at a rate of 50% is a lofty standard to keep going but honestly, I cannot see it ending anytime soon.

On Tuesday night in Delaware, Friesen took the lead from rival Matt Sheppard on lap 23 and went on to hold off Sheppard the remaining 27 laps to take home the big money. The win also vaulted Friesen to the top of the point standings in the STSS South region after five races.

“We had an awesome car tonight for sure,” mentioned Stewart standing next to his hauler drinking an ice-cold beer. “The track was great tonight and we were able to put on some awesome racing for the fans. The boys worked hard on this race car all day yesterday, myself included, and it showed tonight.”

Friesen and Sheppard were once again the show up front as they battled hard and clean and like most races this season it was Friesen who ended up with the upper hand and standing in victory lane.

“It was a great battle between the two of us tonight,” explained Friesen. “Matt always seems to be able to get a great launch of the corners and he got by us.  I thought he was going to run away and hide. Then is seemed like the bottom started to get slick on entry and he started to slide a little bit and miss his entry, then he would hit it right the next lap. When I saw that, I was hoping he would miss it a couple of times and I would be able to get a run on the outside and get by him, which we finally did.  Then the race car just started getting better and better. Thanks to Bicknell Racing Products for the great race car and to Billy the Kid for the awesome smoke they always give us. We broke a spark plug in the heat race, so we had to replace that and Strunky (Jeff Strunk) helped us with some gear tonight as well.  It all worked out.”

As good as Friesen has been on the Modified side this season, his year in the truck series and been just the opposite. The HFR teamed switch from Chevrolet and from having GMS racing help prepare their trucks to opening their own shop down south and switching to Toyotas. It has been trying season for the team and not being able to practice before each race has been a huge detriment to the team in learning how to set-up the new trucks for each race. Despite all the team’s troubles, Friesen has been able to set that aside when it comes racing his modified and he talked about what that is like.

“It’s a lot of sleepless nights, that’s for sure,” replied Friesen. “Every race is important whether it be in the truck or the Modified and we want to do our best in each one every time. It does stress me out at times, but I try to do the best I can no matter what I am driving. The best part is having someone like Tripp Bruce (Friesen’s truck series crew chief) and the guys we have down south who work their butts off to give me a fast truck every race and we’re getting there. We had a fast truck in the second race in Kansas a couple of weeks ago and the truck we raced at Michigan last week was the best handling truck we’ve had all year, but we just got ourselves in the back.  I made a mistake and got in a wreck. The silver lining is that we had a fast truck and I think we learned something there that I think we can apply to all of the tracks.”

Friesen went on to talk about the emotional side of his racing season and dealing with the ups and downs of 2020.

“I probably let my emotions get in the way of a lot of things over the years. I’ve said stupid things and have done stupid things and I am still trying to grow out of that and it’s tough. But I’ll get there sooner or later,” joked Friesen. “Racing is my life and I am very fortunate to be able to do what I love to do and very fortunate to have the great partners that we have to allow me to do that.”

To do what Friesen is doing means a lot of time is spent away from home and with the NASCAR protocols that are in place preventing families from being at the track, it take a special someone to help make it work and Friesen has that with his wife Jessica Friesen who happens to be a race car driver as well and is currently knocking on the door for her first Modified win. A couple of weeks ago at the Fonda Speedway it was a one, two finish for the Friesens with Stewart winning and Jessica finishing second.

“It was unbelievable, Jess has been doing a great job,” cited a joyous Friesen as he happily talked about his wife. “She is an awesome wife, an awesome partner in everything we do in life. She is also a great teammate who I can bounce ideas off and some of the stuff we ran tonight I had on her car and we didn’t really visit it this year until I struggled on Sunday. She helped me with some stuff tonight that we were able to talk about after the race and she told me what my lap times were and what I was doing right and wrong. Jess has also worked hard and she has really picked up her modified game this year, it’s tough getting two cars ready each week. We both have top notch teams and it’s a lot on the guys sometimes, but we all work together to get all of the cars prepared.”