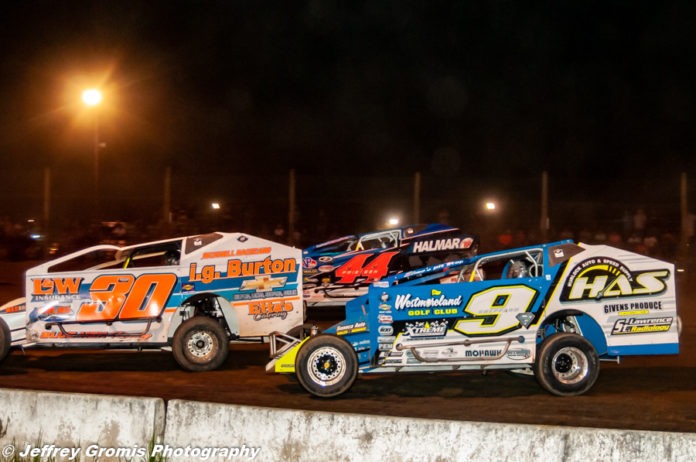 Matt Sheppard never likes to finish second, especially to Stewart Friesen. Sheppard and Friesen are definitely the top two Modified drivers right now in the Northeast and have a tremendous amount of respect for each other on and off the track, but you know when they are racing each one wants to beat the other to claim bragging rights.

Tuesday night it was Sheppard who made it to the front first amongst the two and at first looked like he was pulling away from Friesen.  Eventually, Friesen was able to get by the Waterloo, NY driver and take the win. Although not totally happy with second, Sheppard said it was a good night for the No. 9S team.

“It was a good run for us tonight,” explained Sheppard while the crew loaded up the car for the long ride home. “It’s no one’s fault but my own. I thought the car was pretty good in the heat race and really didn’t know what to do with it, so I just left it alone. I probably should’ve tightened it up some more for the feature.  I know better that. It’s my own fault and I just didn’t keep up with the track changes and we ended up being off a little bit off at the end.”

Sheppard went on to talk about how Friesen was able to get by him.

“The bottom started going away and I think the tires changed some. I am not sure what tire he was running but it didn’t matter anyways, he was flat out better than me tonight and that’s all there is to it.”

Much needed podium finish for Horton

If there was ever a driver that needed a good finish Tuesday night you had to look no further than Jimmy Horton. The past month or so has not gone well for the Neshanic Station, N.J., veteran. Multiple DNF’s due to mechanical failures and culminating with a hard crash a little over three weeks ago at Orange County that caused Horton some back pain along with severely damaging his No. 43 DKM chassis.

Tuesday night, Horton showed he still has what it takes to get up on the wheel charging from his 15th starting spot to finish a very impressive third doing most of the damage up on the high side where the car seemed to go it’s best. It was the shot in the arm the Halmar Racing team needed.

“I had to do something tonight, we’ve been so darn bad lately,” cited Horton standing in his hauler post-race. “I had something to lean on up there and I don’t know if I would’ve slowed down some I might’ve better on the bottom, but that’s where the car was at it’s best so we just had to ride that horse to the end.”

Even without the parts failures and the wreck, Horton was struggling a little for speed and turned to teammate Stewart Friesen for some advice to get him going a little better.

“It was nice to get everything back in one line tonight,” explained Horton. “I had to throw a white flag up the other day and called Stew (Friesen) up. I was so far out in left field right now that I needed some help and we talked over some stuff. He gave me some stuff to try which we did at New Egypt and we weren’t really that good with that car, but I don’t know if I listened to him totally so I went home and checked the notes again and put them under this car.  We loaded this one up and it was pretty good tonight. The track was pretty good, it was a little rough getting into three and I couldn’t get the top every lap. Down in one and two I could hit it every time.”

When Horton came in after the race you could tell he was worn out due to the heat and humidity.

“This is tough for and old man.”

20th to 4th for Bachetti

Andy Bachetti put in a good night’s work aboard the Garrity Asphalt No. 4 on Tuesday night. Bachetti managed to qualify in his heat race, but was not able to work his way into a coveted redraw spot and by not being able to do that was relegated to start 20th in the 50-lap main event.

Bachetti worked hard and at the end of 50-laps found himself coming home with a nice fourth place finish, earning him the night’s hard charger award.

“It was a good run for us tonight,” cited Bachetti. “It’s too bad we didn’t get the car a little better a little sooner. We started out there a little rough, but we did our homework tonight and I think we choose the right deal there. Jimmy (Horton) got me on the one restart there but we had a pretty good car. The Garrity Asphalt machine was really good tonight. We struggled in the heat there, but we made the right adjustments to it for the feature. I think if we started the night like we finished and adjusted on that I think we could’ve been even better.”

Like Horton, Danny Bouc hasn’t been having a good run of it lately, especially on the STSS series. Bouc has shown speed every race in the Craig and Leslie Pondish No. 6 but there was always something that was causing the team to not have the finishes it deserved be it a parts failure or wreck. Tuesday night in Delaware Bouc was able shake off the bad luck and come home with a well-earned fifth place finish.

“It was a tough battle out there tonight, we had to pass a lot of good cars,” explained Bouc. “I was really good in the beginning and I thought I had a top three car there for a while, but it sort of faded a little bit at the end. I don’t know maybe we could’ve picked a different tire or added some more fuel to make it better at the end. This is a relatively new motor to me and it’s a totally different package than what I am used to and it requires four different springs and four different shocks and now we have to get a notebook going for this motor. Hopefully from here on out it keeps getting better. This car has been good all year and hopefully we can get Craig and Leslie some more good finishes. I’ll tell you, this car has been fast at everyone of these Deyo races and if we had any luck at all we could’ve been a top five car in every race.”

38 cars were on hand for race number five on the STSS South region with the four heats being won by Tyler Dippel, Matt Sheppard, Jordan Watson and Billy Pauch Jr. Matt Stangle was the winner of the consi…

Going into Tuesday night’s race, Billy Pauch Jr. was the series points leader. Unfortunately for Pauch, his night ended on lap 41 while running in third when what was thought to be blown motor on the Rick Holston owned No. 96. Luckily for the team the problem was a oil filter gasket and not a motor issue…

Larry Wight made the long drive from Phoenix, N.Y., to drive the Gary Simpson owned No. 12K. The drive home was made even longer when the motor dropped a valve during hot laps. Despite efforts to fix the problem, the team was done for the night…

We also learned on Tuesday that Gary Simpson, owner of the No. 12K was recently diagnosed with cancer. My prayers are with Mr. Simpson as he deals with the dreaded disease…

Well wishes go out to driver John Willman who was scheduled for gall bladder surgery on Wednesday morning after competing on Tuesday night in Delaware. John will have to sit out of his race car for four weeks while recovering from his surgery…

Congratulation to Tanner VanDohren on his first career sportsman win on Tuesday. The young teenager held off multi-time sportsman winner Scott Hitchens for the win. I am sure this will be the first of many wins for the young man…