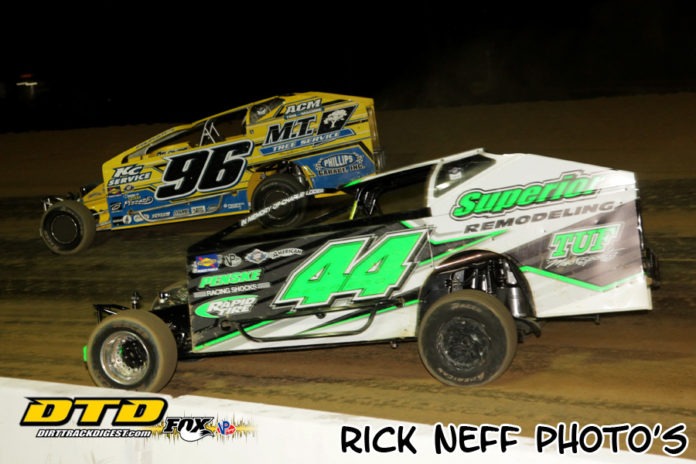 Billy Pauch Jr., knew he was in for a battle to the finish when Stewart Friesen moved into second place late in the race Tuesday night at Georgetown during the running of annual Beach Blast. Pauch who had taken the lead from Jeff Strunk on a lap 20 restart was looking for win number three on the STSS South series. Pauch looked to be in good shape as he took off and started to distance himself from the field. Friesen moved by Strunk on lap 25 for second got the break he needed when the yellow was thrown on lap 27.

Pauch took off on the restart and put some distance between himself and Friesen, but Stewie is never one to give up and found that extra gear and closed the gap one lap later. Friesen received the break he was looking for when Pauch missed his mark going into turn three allowing Friesen to put a slider on him to take over the top spot. Pauch tried to crossover Friesen coming out of turn four, but Friesen was just too fast and led the way as the white flag came out. Pauch stayed close but did not have enough to overtake his nemesis.

“With a driver like Stew behind you, you know you can’t make any mistakes,” explained a disappointed Pauch after the race. “I made one mistake and I jumped the cushion and he was there. I knew what I needed to do, but just missed. It sucks but it was a good run, my guys are awesome, but I guess losing to him (Friesen) is okay, but it still sucks! I guess we are the best of the rest, so we’ll take it. We came from twelfth to take the lead so that is good for us, but I just made one mistake and that was the race. What are you going to do?

“I just have to do better and learn from it and move on. When Stew is behind you, you have to be perfect and tonight I wasn’t. That’s why he’s won close to thirty races this year and I’ve won five but we’re right there with him. We have a good team, so we’ll turn it around and come back in a couple of weeks.”

Pauch has been quite impressed with what Friesen has done this season and praised the Sprakers, N.Y., driver and compared him to one of the best.

“Hat’s off to him, Stew is a once in a generation driver. He’s like my dad was back in the day and we’re doing the best we can with what we got.  It’s an awesome program we have here. Thanks for letting me know he can’t run the Coalcracker (laugh).”

Anthony Perrego has always been a big supporter of TEO Procars and to this day he still is. However, the Brian Smith No. 44 team recently purchased a new Bicknell chassis to see if that could ignite a spark in the team. Perrego has been fast right out of the box with the new Bicknell picking up a win at the Albany-Saratoga Speedway last Friday night. The team decided to bring the new car to this year’s Blast at the Beach race and the move paid off as Perrego was right in the mix for the win ultimately having to settle for a third-place finish.

“We had a really good car tonight and were able to roll it up there to front pretty quickly,” cited Perrego as he and his team hustled to get the car loaded into the hauler before the rain started to come down. “We had a good battle with Strunky (Jeff Strunk) there for a while. I think If I could’ve gotten by Strunk earlier and got to the lead it would’ve been tough to pass us. I was really good on the top. I tried the inside earlier, but the top cleaned off and it was definitely faster. I’ll tell you, Little Billy (Pauch) has some motor in that thing and Stewie came on strong there at the end so we’ll take a third and roll it into the trailer.”

The tracks Perrego normally races this car on race on the Hoosier tires. The STSS runs on American Racer tires which react totally differently due to the characteristics of the tires. I asked Perrego if that caused him any issues.

“Believe it or not, we did not change too much on the car due to the tires. We changed a little bit here and there, but no major changes at all. I think the stuff we run at Albany was probably what we needed for the feature here. It was the first time we ran this new car on American Racers so we’ll put everything down in out notes and I think Middletown has another test and tune coming up so we’ll do a little more testing with these tires to see if we can’t make it any better.”

It has been an up and down year for the Montgomery, N.Y., driver who seems to be picking it up lately as the big money races approach.

“We started off the beginning of the year pretty hot, especially at Middletown,” explained Perrego. “We sort of fell off there after the good start and now we’re starting to pick it back up. This new car has changed it around for us so we’re looking forward to the end of this year and next year.”

Like I mentioned earlier, Perrego has for the most part always driven in a TEO chassis and works for TEO Procar in the off-season. Switching to a new chassis maker was a tough decision for the team to make but it was the change they thought they needed to right their season.

“Brian Smith, the owner wanted to do something different to see if that was what we needed to get our season back on track,” cited Perrego. “It’s been kind of hard for all of us as close as we are to Matt (Hearn) and Bobby (Hearn) and all those guys who work there. I’ve worked there for a while also, so it’s been tough. They did everything they could for me and if they ever needed anything, I would help them out. But, we thought we needed a change to spice things up, things were becoming a little sour and Brian (car owner Brian Smith) spends a lot of money to make this all work and we have to keep him happy and the last couple of months he’s been back all gung-ho and that’s good for the driver.”