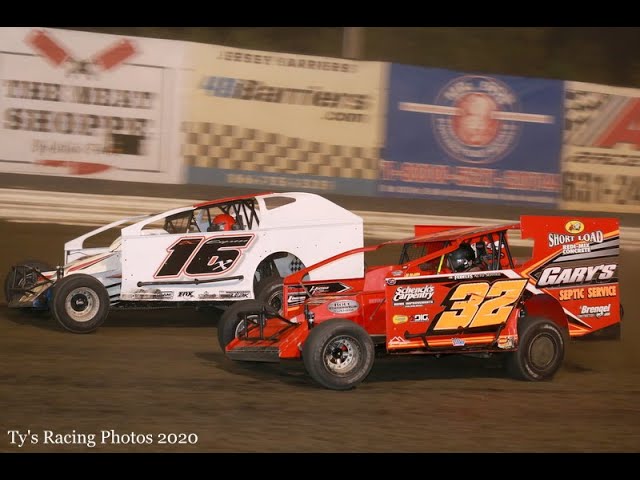 What started out as a tough week for Danny Bouc ended in a big way for the Pipersville, Pa., driver as he stood proudly in victory lane holding up the $10,000 check for winning the Eighth Annual 100-lap All-Star Cup Shootout at New Egypt Speedway.

Bouc spent the week before the race battling what was thought to be a nasty head cold and then as he was on his way to get gas to tow down to Georgetown on Friday, the axle broke off of his trailer ending any chance of racing on Friday night.  He towed to New Egypt on Saturday with an open trailer.

“It was a rough week for sure, I was sick all week and really wasn’t sure I was going even go to Georgetown on Friday night to race,” explained Bouc. I thought I should put gas in the truck just in case I did go and when I went over a bump with the trailer the axle broke. The biggest thing is winning that $10,000 is now I can fix my trailer hopefully so we don’t have to keep on using this thing but then I was thinking if we take this to Port Royal and win $53,000 I’ll have to paint it gold.”

Bouc, who is the 2020 points champion at New Egypt Speedway, is known for his aggressive on the gas style of racing which has sometimes got him into trouble either with himself or his fellow competitors, but on this night Bouc drove a very patient race and let the race and the car come to him.

“I’ll tell you; this car came alive the longer the race went,” cited Bouc. “The last 30 laps I was able to turn up the wick and was able to check out. I’ve been pretty good the last year or two pacing myself, but I have had some bad weeks here and there. All-in-all, I have been doing a lot better at that lately, but I feel that’s hurt my weekly racing a little too. In a regular weekly show here I get a ninth or a tenth and it’s a good points night, but I always think to myself that if I maybe got up on the wheel a little more on that one restart that I could’ve finished fourth or fifth or maybe I could’ve wrecked. I did finish every points race here and never got into any wrecks so I think I am better with that now.”

The big move of the race for Bouc was when he was able to get a good run on a lap 70 restart and dart from fourth to second getting by Duane Howard and Frank Cozze.

“Under that caution I kind of saw that there was a lip,” explained Bouc. “I knew Dominick (Buffalino) was working it in the beginning of the race and I figured what’s it going to hurt to try it. I felt like I wasn’t far enough up to battle for the lead yet so I tried it and I was able to roll right around everybody.  Then all of a sudden the car came alive and I really started going on the top there. That restart there is probably what won me the race because I knew Duane (Howard) was getting better and he is a smart driver when it comes to long distance races .  Getting by him was huge.”

As most drivers will tell you, when you are towards the top of the point standings at most any race track it makes it difficult to get the front in a 30-lap feature on most nights, especially with the handicapping procedure most tracks use and the cars being so equal. The 100-lap distance tonight was just what Bouc needed to show how good his car has been.

“I’ve felt like we’ve had a good long run car all year,” mentioned Bouc. “The first race we won here this year was a 40-lap race, then again the second race I won here was a 20-lap race so that doesn’t make sense I guess, but this Bicknell car has been good here all year.”

Winning a big race at his home track of New Egypt Speedway is something that Bouc has always strived for but had yet to accomplish until tonight.

“It feels really good to get another big win under my belt,” said Bouc. “I did get that big win at Big Diamond (Coalcracker 72) a couple of years ago.  Usually a big win happens at your home track first, but I just haven’t been able to get a big win here and honestly, I’ve been garbage in most of them. Winning this tonight feels really really good. The track was the best it’s been all year, it was really racy from top to bottom and I could move all over and still be fast.”

Howard Gets Much Needed Second Place

Duane Howard has had some tough years before in racing, when you have been in this game as long as Howard has been it is inevitable to have a rough year. But even the Oley, Pa., driver can’t remember a season that has gone quite as bad as 2020 has. So far in 2020, Howard and the Norm Hansell owned No. 357 have been to victory lane just once at Grandview Speedway. With a team of their caliber and capabilities that is just unacceptable to Howard.  Despite a good second place finish at New Egypt Howard was expectedly disappointed

“I know a second-place finish is good, but with the way 2020 has gone we needed a win,” explained Howard. “I am satisfied with second, but I’m not going to say I’m happy. I really like racing here; I always seem to run up front when I’m here. The car was good tonight.  Our tire choice probably ate us up a little tonight. We went with a little softer tire and I just couldn’t go anywhere at the end. Not making excuses though, Danny (Bouc) rolled the top just at the right time to get up there.”

Once Howard was able to work his way past Ryan Krachun into second it looked like he was closing in on Bouc, but in the closing lap Bouc was able to maintain a small advantage.

“We were closing in a little, but I could see he was moving around and searching and I just couldn’t move around like he could and just had to keep it under me,” mentioned Howard. “I could feel the tire was getting used up and getting hot at that point I had to do what I could do to salvage the second-place finish.  With the year we are having in 2020, salvaging a good finish has been hard for us. Overall, we’re happy tonight but still a little disappointed. Maybe after this we can finish out the year on a good note.

“This team should be running up front like we did tonight. We haven’t traveled as much this year since we were struggling so much everywhere.  Tonight it was nice to come to a non-home track and do well. As a team we needed some confidence, but as a driver and we’ve talked about this before I needed to get some confidence back in myself as a driver.”

Krachun Gets a Podium Finish

For New Egypt Speedway track regular Ryan Krachun, it was a bittersweet night. You would think a third-place finish at your home track in a big race would be a good night.  For Krachun it was a disappointing ending to what could’ve been. Krachun, who’s Bicknell No. 29K was very strong all night, led early on until Billy Pauch Jr., got by him. Krachun ran second until he took over the lead on lap 70 when Pauch had a flat tire. On the restart, Krachun looked like he had the car to take home the big check.  After a few laps both eventual winner Bouc and Howard were able to move past the Neshanic Station, N.J., driver relegating him to third-place in the end.

“It’s weird because this is probably the first time at a big show that I am not happy with a third-place finish,” explained Krachun while his car was going through post-race tech. “We were good and this Bicknell car has been good since we brought it out.  I think this is the fourth or fifth race we ran with it so we’re still experimenting and getting used to it. We got messed up with a lapped car there and Billy (Pauch Jr) got by me and ultimately, I think we made the wrong tire choice in going with a softer tire and it was wearing down at the end.

“That being said, there are no two drivers I would rather have being in front of me here in tech than Danny (Bouc) and Duane (Howard). I get along with both of them and they both are great guys. Congratulations to Danny on the win, that is huge for him and to Duane on a good run. I guess I am happy, but I want more, I want to be that one standing in victory lane in one of these big races.”