When I interviewed Danny Bouc the night he won the 2020 New Egypt Speedway track championship, Bouc acknowledged that he was most likely going to make a track change on Saturday nights in 2021. I doubt Bouc had any idea at that time the big change that was awaiting up ahead for the Pipersville, Pa., driver.

The past three seasons found Bouc running his family-owned No. 32 weekly at New Egypt and the Craig and Lesley Pondish No. 6 on the Short Track Super Series South Region and other specials. Coming out of 2020, that was the plan once again heading into 2021. But as what normally happens each offseason on the Modified circuit, silly season kicks in and this year was a busy one for sure as some high-profile rides opened up. After competing very competitively the past three years in the STSS South region, Bouc’s name started to appear as a candidate for a few of those rides.

Danny had a couple of conversations with different car owners and when the dust settled, Bouc was named as the driver of the Norm Hansell owned No. 357 for 2021. The No. 357 is an iconic ride on the NJ/PA modified circuit and has been driven by some of the best modified drivers to ever strap into a race car. The team will race regularly on Friday’s at the Big Diamond Speedway and on Saturday’s at the Grandview Speedway along with other spec 358 specials at New Egypt and Bridgeport.

“It’s awesome to race for Norm,” said Bouc. “I think Norm and Jay (357 crew chief Jay Thomas) get a bad rap, but they are really good guys and I see us meshing really well. I feel that our personalities are pretty similar, and I think that is one of the reasons why he gave me the phone call because he wants to see someone get up on the wheel and be serious about winning. I’ve always been like that as well and sometimes get a bad rap, but I am serious about winning also. I am there to win, and I run everybody hard and I expect the same from everybody else.  If you’re not doing it that way then maybe you shouldn’t be out there.”


For Bouc and Hansell, it comes down to winning in 2021.  Everything else will take care of itself if that happens.

“Our mentalities about racing are the same and that was probably the most deciding factor when it came to getting this deal all put together for both of us,”” cited Bouc.  “We don’t care about championships; championships are going to come when you win races.  If you win two or three races that pays as much as winning the championship. It’s more important to me and Norm to go that extra mile and push for the win, maybe you come in on the hook once in awhile, but if you don’t push it hard that one time and finish second when you could’ve won, that hurts and that is why it was so special to me to win the New Egypt championship this year. I really didn’t feel that I was that caliber of driver to win a championship. I don’t like to go and put-put around to finish seventh or eight very week just to get my points that I needed because that don’t pay the bills.”

Bouc is excited for the opportunity to drive for a top notch team in 2021.  He had everything in place and ready had this deal not come together.  He feels he’s ready for the chance to drive one of the most iconic cars on the Pennsylvania circuit.

“All in all, it really means a lot that Norm and Jay made that phone call and choose me to drive for them,” mentioned Bouc.  “I feel like where I am at now as a driver that I deserved it and I think I mesh well with both Norm and Jay. I’ve talked to them plenty in the past and we both agreed that I wasn’t ready for this yet, but now is the right time. Before all this happened, I had talked to all of my sponsors regarding next year and had everything lined up and when Norm called me I was like I don’t know, I am very loyal to my sponsors, but when I talked to a couple of them they said that this is a deal you can’t pass up and it’s a once in a lifetime opportunity.  I am super happy and grateful and very appreciative of Norm and Jay for giving me this opportunity.”

This will be Bouc’s first attempt at running both Big Diamond and Grandview on a regular basis after running at New Egypt Speedway for the bulk of his racing career. Bouc is looking forward to the change, and as a former winner of the prestigious Coalcracker 72, he’s ready for the challenge of weekly racing at Big Diamond.

“I am really looking forward to running Big Diamond on a weekly basis,” cited Bouc. “I am excited to be racing there. The last couple of times there haven’t gone super well, but I have always loved the place.  It was so tough for me to get there on a Friday night with my own stuff, and only having one car really makes it difficult. Every time I am there, I run pretty decent and I’m sure Norm’s stuff runs really well there, and I think we can be a really good combo there.”

As for Grandview, he knows that will be a difficult chore as the field is stacked with stout competitors week-in and week-out.

“Grandview is going to be tough to race weekly and it don’t matter who you are, the competition is tough there,” explained Bouc. “I mean look, there are some weeks that (Craig) Von Dohren and (Duane) Howard don’t qualify.  I think once I run there a couple of weeks, I think we’ll be good. You really have to get up on the wheel at Grandview and I will have no problem doing that. I have been labeled as an aggressive driver and you have to be like that at Grandview and not let anybody push you around and you know me, I don’t let that happen. But seriously, it going to get some getting used to, but I don’t think I’ll have a problem with it and Norm and Jay don’t think I will as well.”

“Craig and Lesley have been great to work with,” explained Bouc. “I look forward being back in the No. 6 for the STSS and continue to build on what we did last year. I kind of feel that we have some unfinished business with Craig’s stuff on the STSS and I really want to finish the job for Craig. We are working on getting a good motor together so that will be a big deal for his car, and I think it’s going to go really well with Craig and Lesley’s cars this year.”

The family-owned No. 32 modified will also be available for Bouc to run when needed and that is the car he plans to take to Florida come January to race at Bubba’s Raceway Park in the 2021 Sunshine Swing. With that Bouc has the No. 32 all freshened up and ready to race a little over one month from now.

“We’ll start the year with my own car down in Florida for the Deyo series, mentioned Bouc. After that I will use my car as a backup for the STSS if we need to but otherwise it will just sit here all year.” 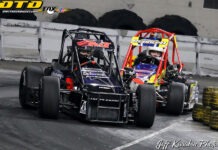 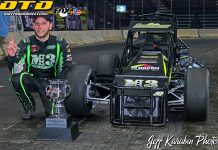