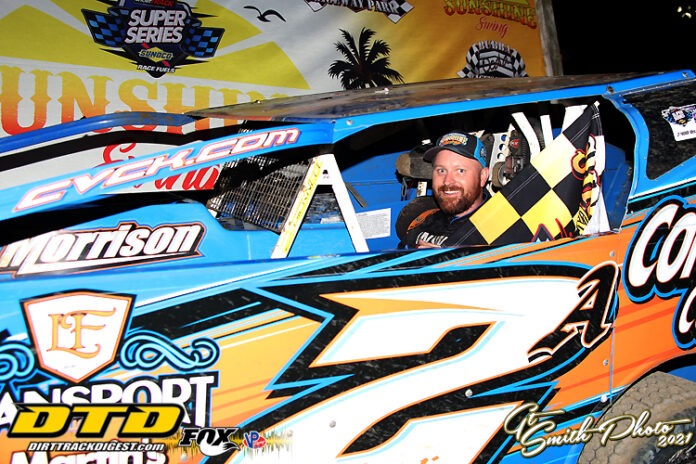 The news that Mike Gular and the Terry Fasnacht No. 2A team were taking their talents to race at New Egypt Speedway in 2021 came out of blue for this writer. I think most people just assumed the team would race weekly at Grandview Speedway which is in their backyard. But history shows that the No. 2A team is not afraid to take on a new challenge.

In 2019 the team decided to race regularly at the Orange County Fair Speedway on Saturdays and although the team didn’t pick up a win at OCFS, the experience both the driver and team gained was invaluable.

In 2021, it will be another challenge as they get ready to take on the New Egypt Speedway and Gular talked about the change.

“The payout is pretty good there,” as Gular explained the reasons for the change. “Terry (car owner Terry Fasnacht) really likes it there and we’ve had some really good runs there in the past. Their schedule also fits good with our team. We like running Grandview, but it is a grind with I think 26 nights with no Saturdays off and we thought that with all the traveling we do this would be a little easier of a deal when you are trying to run competitively for points.


“It is nothing against Grandview, but I have the opportunity to travel now and go to different tracks and put myself out there in front of other people and sponsors. We went to Middletown in 2019 and met a bunch of people there and put our faces in front of a bunch of new people up there now we are going to do the same thing at New Egypt.  Hopefully we can do the same down there. We will still support Grandview any chance we get and be there for the 76er and all the Thunder on the Hill shows.”

The 2021 New Egypt Speedway schedule affords the Modified teams a few scheduled off Saturday nights during year and that was important to Gular and the team.

“It’s not like we are only running 20 nights a year, with all the traveling we do,” stated Gular. “There will be some weeks during the year that we will running a couple of mid-week shows that are at least three to four hours away from the shop and then come back and have to work at our full-time jobs so having a night off here and there will help us out. Of course, me being the way I am I will want to go to Grandview and race that night, but we’ll have to see how it plays out. And if New Egypt cancels early, we can plan to go somewhere else to race that night, so we’ll see what happens. My son is racing now, and my daughter is playing soccer so a night off might not too bad.”

Although Gular has raced at New Egypt in the past for special show, he knows it will be a challenge to race there full-time.

“New Egypt is a place we’ve never ran at full-time,” cited Gular. “We’ve run a few shows there the past couple of years. I would say maybe a dozen times and we’ve run decent there. We had some good runs and passed some cars there. I think we’ll have a consistent car to take there, it might take us a couple of weeks a couple of weeks get it straightened out and where we want it, but I think we’ll be okay.”

Gular believes going to New Egypt will improve his talents as a driver.

“At the end of year, I’ll either be happy or I’ll be pissed about it. I don’t know, the big thing for me is not getting stale at one track. If you look at little Billy (Pauch Jr), he runs New Egypt all the time and he is good just about anywhere he goes, and I am not saying that just because he runs New Egypt because he is a very good driver. My thinking is maybe that by going to a different style track will help me out a little bit and make me a little sharper. I think it will also help me out for the STSS race there this year. It will be nice to have a home track advantage for a change over some of these guys.”

Owner Terry Fasnacht will make sure the team is set with cars and motors for 2021 and that the No. 2A team will have everything it needs to be successful.

With a busy schedule ahead for the upcoming year, Gular started his year off with a bang at Bubba’s Raceway Park in winning the finale of the STSS Sunshine Swing. That win was against the best of the best and Gular is hoping that it is a good sign of things to come.

“Winning down there was awesome, and it was huge for our team,” said Gular as I could still hear the excitement in his voice as he talked about it. “It certainly made that trip a lot easier to come home from, that’s for sure. Going into the last night, I was thinking what a miserable trip this has been. We only had one top ten in the two previous nights and winning on Saturday, especially against the caliber of competition, just makes winning that much sweeter.”

It will once again be a busy season for Gular and the No. 2A team as they have set an ambitious schedule once again. Along with racing on Saturday night’s at New Egypt, Gular will once again call Big Diamond Speedway his Friday night home as he sets out to defend his title from last season. Gular also will also set his sight’s on winning the both the STSS North and South series titles.

“We will once again race in both of Brett’s (Deyo) series and see if we can win our first title there,” explained Gular. “I am excited to be going to Utica-Rome for the first time this year, I’ve never been there. I know they say it’s very slippery, but that’s also when the ran on Sunday’s and started around 4 o’clock in the afternoon so we’ll see how that goes. I think it’s pretty cool that they are keeping it a racetrack when he just could’ve have sold it and have been done with it.

“We are also looking forward to defending our championship at Big Diamond. We had a good year there last year with some wins and hopefully we can do the same thing this year. Jake (Smulley) offers some good money to race there and I look forward to going back there on Fridays.”

As usual it will be a busy year for Gular and his team but as a dyed in the wool race car driver, he would not want it any other way and is incredibly grateful for the opportunity he has with owner Terry Fasnacht. With a win already under his belt this season, I look forward to a big year from the No. 2 A team in 2021.