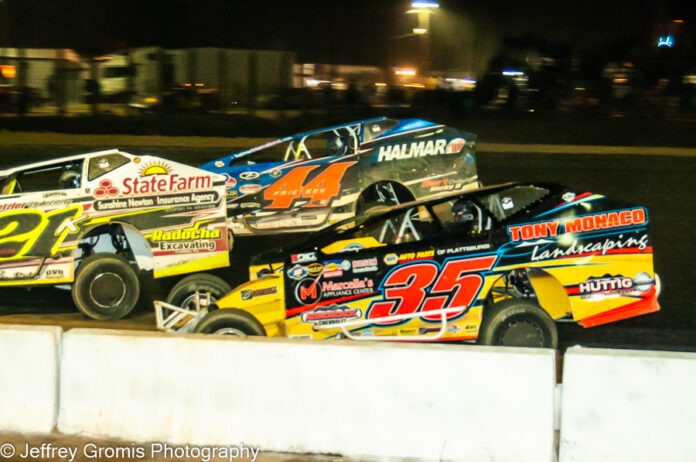 I have had the pleasure of watching Stewart Friesen win many races since I started writing for Dirt Track Digest in 2015 and really shouldn’t be shocked by anything the Sprakers, N.Y.., driver does behind the wheel of his Halmar Friesen Racing No. 44. But last night was something I haven’t seen Friesen do before in his many wins.

Friesen was not his usual dominant self throughout the 30-lap main event. Starting in the eighth spot, Friesen advanced steadily during the early portion of the race and entered the top five as the field completed lap five. When the yellow was brought out for second place running Anthony Perrego, Friesen moved to fourth. On the restart, Friesen darted by the third-place car of Max McLaughlin, who was making his STSS series debut in the Norm Hansel No. 357. Once into third, Friesen settled in there as Mike Mahaney and Rick Laubach battled for the lead out front.

With 10 laps to go, Laubach was in control over Mahaney and Friesen and looked to be heading to a sure victory. However, as luck would have it for Laubach, the fast lane around the speedway was down low which is where Laubach was running as he approached lapped traffic.

With five laps to go, Laubach’s lead was starting to shrink as he came up on the car of Kyle Weiss who was the last car on the lead lap. Weiss was running on the inside and held his line, Laubach tried once to go around the outside, but his No. 1K just would not work on the outside.

It was Laubach, Mahaney and Friesen as they took the white flag. Mahaney was able to get inside of Laubach as they went into turn one and steal the lead, but Friesen had other ideas as he went to the extreme outside coming off of turn two to sneak around both Mahaney and Laubach to take the lead as the leaders roared into turn three.

Mahaney made a last-ditch effort down low to steal away the win, but to no avail as the lapped car of Weiss was still there preventing Mahaney the line he needed to win the race. Friesen crossed the line ahead of Mahaney to win the race with Laubach finishing a disappointing third.

Friesen talked about the last lap and how he was able to get the job done when it looked like he was going to have to settle for a podium spot with five laps to go.

“Man, that was a wild one for sure,” stated a still elated Friesen at his hauler after race. “My car wasn’t really that good until the last five or six laps. Then we started rolling the middle and following Mahaney’s lane because that was the lane to be in. I started following them and we started to make a little progress.  When Rick (Laubach) got bottle up with lapped traffic in turn one on the last lap I was able to get up there on the outside going through one and two and make it work to get past both Rick and Mike.”

At one point on the last lap coming down the back stretch, Friesen went up over the lip of track but kept his foot in it to drive himself out of it and keep his momentum going as he headed into turn three.

“Yeah, that was a little scary there but there is a little bit of groove back there when you get over the lip a little bit and I was able to take advantage of it to keep my momentum going,” mentioned Friesen. “I’ve seen the Doc (Danny Johnson) do that same thing all my life at Ransomville so I know you can use every inch of the racetrack when you need to.”

Friesen went to talk about the track changed during the race and how his car was able to react to the changes.

“Early on there was a good there was a good top in turns one and two which was really fast, but three and four it was like a razors edge,” said Friesen. “I know I got over it once and Matt (Sheppard) got over it once along with a couple of other guys who did as well. I was trying to hit the bottom through three and four, but there was a little bit of water down there and it was hard to get a clean lap down there so I started to roll the middle as the race went along. With these small-block cars, you need to keep them wound up to keep your momentum up.

“It’s weird, this place is unique. It’s challenging and it has sort of an off apex on the inside lane and then it has a really fast outside lane, but I enjoy it and obviously it suits me because we’ve had a lot of success here along with some good luck as well. Overall, the track was pretty good tonight considering all the cars that were on it and I thought it held up nicely. It was pretty wet early on but that is the way they had to do it with all the cars that were on it tonight to have it race good for the feature. The track started to take a little rubber late in the race but in no way was it freight train racing. Unfortunately, it got over a little later than the officials wanted but it made for some good racing.”