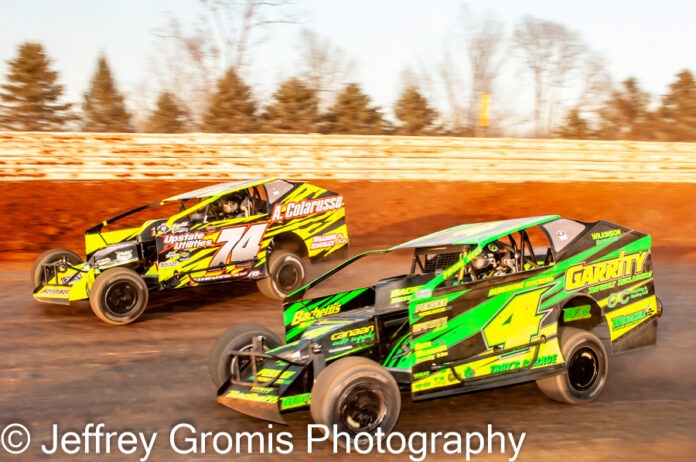 It has been eight years since the mighty Modifieds invaded the Selinsgrove Speedway and if the racing is any indicator of things to come, I can assure you it will not be another eight years until they return.

Thirty-one cars took to the starting grid for the feature event in the STSS debut of the Icebreaker and standing in victory lane after 40-laps of wild action packed racing was none other than the “Wild Child” himself Andy Bachetti. The racing throughout the top ten was simply fantastic with action going on everywhere on the fast Selinsgrove dirt surface.

Bachetti, who started from the pole had to battle hard for the victory after falling behind outside pole-sitter JR Heffner who got the jump on Bachetti at the start. Bachetti continued to run in second place holding the hard charges of a strong running Kyle Coffey and finally was able to work his past Heffner on lap 23 to take over the lead.

The Modifieds of Coffey, Anthony Perrego, Larry Wight and Matt Sheppard all battle hard behind him for spots in the top five Bachetti was able to maintain a small but safe lead until Perrego ran him down on the last lap but the Sheffield, MA wheelman was up to the task as he held off the hard charge of Perrego to take the big win.

“That was a big win for our team,” said a happy Bachetti standing outside his hauler after the race enjoying a well-deserved cold Bud Light. “JR (Heffner) got a good jump on us there at the start but once we got up and rolling, we were pretty good. We just couldn’t restart good. We had a fuel issue, not sure what it was but it definitely was some kind of fuel issue. Not sure if it was the carburetor or something else but we just couldn’t fire off there on the restarts but once we got it wound up it was good. When those cautions came out there, we definitely got a little nervous.”

The record will show that Bachetti started on the pole and won the race and if you didn’t have the pleasure of watching the race you would assume that it was an easy win for the Lebanon Valley track champion, but as Bachetti explained that was not the case at all.

“I can tell you for sure, these races are never easy to win no matter where you start,” explained Bachetti. “The competition in Brett’s (STSS series promoter Brett Deyo) series is tough as it is at any track and it just keeps getting tougher from race to race. There are a lot more people following the series, there is better equipment available and the drivers are a lot better. It was good win and I’ll take it anyway I can get it.”

The Garrity Asphalt No. 4 team had a tough go of it last week at Georgetown, but made up for that with the big win on Saturday at Selinsgrove bringing some confidence back to the team as they look forward to making it two in a row on Sunday at Port Royal.

“It was a tough weekend last week at Georgetown,” stated Bachetti. “But this team worked hard all week to get us back up and going and we’ll be on the gas tomorrow at Port Royal.”