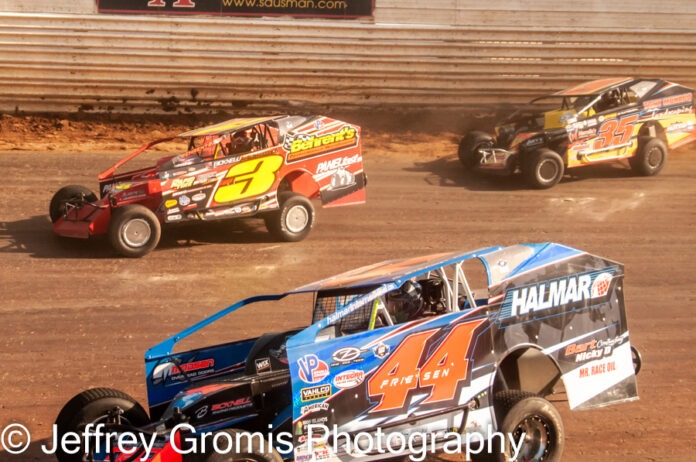 Stewart Friesen does not like to lose, especially after leading the first 32 laps of a 40-lap main-event in yesterday’s Spring Speed Showcase at Port Royal Speedway, but that is exactly what happened to Friesen for the second race in a row.

Just last Saturday, the Sprakers, N.Y., driver led most of the race at Georgetown before being passed by Matt Sheppard in the closing laps of the race relegating him to a second-place finish. One week later it was DeJa’Vu all over again for Friesen as Mat Williamson was able to get by him late at Port Royal to win the Spring Speed Showcase 40. Mike Mahaney was also able to get by Friesen on a late race restart dropping Friesen to a third-place finish at the end of 40-laps.

“It is absolutely disappointing,” as Friesen talked to me about his race inside his hauler. “We had a good car and just made a mistake. I got impatient there, I saw Matty (Williamson) rolling in on the middle one lap and I guess (Mike) Mahaney was outside of him, but I just got jammed up on the bottom in the rubber and then it’s dammed if you do and dammed if you don’t.

“If you stay behind them, there’s a chance the guy behind you can roll you get by both of you and the lapped car. I saw him try to get out there and said to myself, ‘alright don’t try that move’ and two laps later I just lost my head and said watch this. I’ll be able to get around the lapped cars and get back to the bottom and Mat got underneath me and that was the race.”

What surprised Friesen the most is how the track ended up getting to where it got to be during the race.

“It was tough out there today,” explained Friesen. “I didn’t anticipate the track getting like that and maybe I should of, but this place usually doesn’t get like that and usually stays cleaned off and wide. I felt like we had a really good car early on when it was cleaned up. I could rip the fence in turns one and two and was good coming down the hill and rolling the bottom through three and four.

“Then it started to rubber up down on the bottom and that’s where you had to be. All in all, it was a good run for our Halmar No. 44 team. We continued to have some crazy good luck in the draw but sometimes that goes against you in the feature but that’s how it goes, and we’ll move on.”

Friesen was referring to his starting in second spot in the feature alongside his wife Jessica who started on the pole.

“That was pretty wild there,” said an elated Friesen when talking about his wife. “It was awesome, she made a good move to get to second in the heat race to get into the redraw. I am very proud of her and she has some good confidence going right now after finishing fourth today, which will give her some confidence going into the truck race at Bristol next week.”

I joked with Friesen about him working a deal with Jessica at the start of yesterday’s race like teammates sometimes do in NASCAR racing.

“No, not all,” Friesen laughingly said. “We did kind of work together in the original start of the heat race as I told where I was going to go and what I was going to do and it worked out pretty good as she had a good roll going which was important to her only having a 360 motor in her car.  We definitely worked as teammates there so she could get into second, but when it comes to the feature I told her ‘all bets are off now baby’ it’s time to go and she did a good job and I am really proud of her.”

Next up for the Friesen’s is the truck race on the dirt at Bristol Motor Speedway next Saturday.  Even more excitement looms for Stew after that as he will make his NASCAR Series Cup debut next Sunday driving the No. 77 car for Spire Motorsports.  The Camping World Truck Series regular in eagerly anticipating the moment.

“I am very optimistic and excited,” stated Friesen as he eyes lit up as I asked the question. “It’s a dream come true! Never in a million years did I think I would be doing what we’re doing in even the Truck Series, let alone adding the Cup Series on top of it. I pinch myself every day. I have a beautiful wife, a beautiful family and drive for the best guy (Halmar owner Chris Larson) who takes care of me like family, and I appreciate everybody who has helped me along the way. I am truly blessed.”