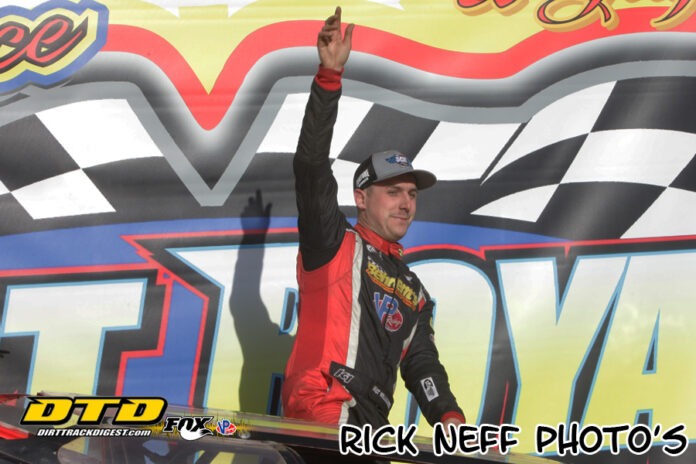 Williamson was back in the Jeff Behrent No. 3 for the first time this season during the STSS Central PA Takeover weekend.  With Jeff and Harry Behrent not being able to attend this weekend, it was a last-minute decision to bring the potent Bicknell Modified to the track.

“Jeff had something come up this week where he wouldn’t be able make the race and it took a lot of convincing to talk Jeff and Harry into letting us take the car down here to race,” explained Williamson while he was returning countless congratulatory text messages on his phone. “We needed to race and if we weren’t able to bring Jeff’s car down here, Spot (Williamson’s crew chief on the Buzz Chew No. 88 car Ron Ste-Marie) was ready to order some American Racer Tires for the Buzz Chew team so we could race.”

After a convincing win in his heat race, Williamson started the 40-lap main-event in the eighth spot and quickly worked his way through the field.  On lap five moved past pole-sitter Jessica Friesen to take over the second spot behind the leader Stewart Friesen who was way out in front of the field at this point. As Friesen began to encounter lapped traffic Williamson closed in and was right behind the leader when Anthony Perrego brought out the yellow exploding a motor on lap 17.

When the race resumed, it was Friesen back to the front and pulling away from Williamson as the field took the crossed flags at the halfway mark. At this point the track was starting to lock down with everyone running down low. Once again Friesen approached the back of the pack with Williamson starting to run the leader down. Lap 28 saw Friesen get boxed in with traffic allowing Williamson to pull up on leaders back bumper.

Three laps later was the break Williamson was looking for as the leader Friesen missed the bottom through turns one and two allowing Williamson to make the low line work and grab the lead away from Friesen.

“The lapped traffic was definitely a factor,” mentioned Williamson. “When Stew caught lapped traffic I caught back up to him, but before that I did two or three good laps to try and see if I could catch him.  I wasn’t catching him so I knew at that point I had to save my stuff and let the race kind of work out the way it was going to work out and fortunately it worked out in our favor.”

Williamson went to talk about the pass he made for the lead. “I’ve had the same thing happen to me before when I’ve won races and I’ve done that before when I get behind the guy and I get to the other end of the track and I do the same thing and he drives back by me. The small block race at Oswego comes to mind when (Matt) Sheppard slid up and I drove by him, then I go into turn one all excited to be leading and then I drive right out of the rubber and he passed me right back.  So I knew once I got past him, I just had to hold the bottom and do the best I could to put some good laps together. “

After starting out the season in February racing in the DIRTCar Nationals at Volusia where the Buzz Chew No. 88 had okay finishes, but not up to the standards the team set for itself in 2020 when they dominated the week in Florida. Running well this weekend was a good way for Williamson to get back the confidence the teams were looking for as the racing season starts to heat up in 2021.

“Yeah, we struggled in Florida,” stated Williamson. “We had a couple of decent runs, but it was not up to the level we wanted to and, like I said earlier, we had some stuff come up this week where Jeff wouldn’t be able to come, but we have to race. If we don’t start racing with Stew, Matt and Larry, and they just keep on racing, we’re going to get put behind the eight-ball. Fortunately, we’re still in that category in being up there with those guys. It was nice to come down here and prove that to ourselves.”

Williamson has had the nickname attached to him as “Money Mat.”  It is a nickname that is well deserved after winning the Centennial Race at Orange County Fair Speedway in 2019 worth $100,000 along with the 200 at Super Dirt Week that same season worth $50,000. Williamson continued his big money winning ways in 2020 winning the STSS Speed Showcase at Port Royal worth $53,000 and the Eastern States 200 worth $25,000. Still, when it comes to everyone listing the top drivers in dirt Modified racing everyone’s choices for first and second is Stewart Friesen and Matt Sheppard. It is not something that goes unnoticed by the St. Catherine’s, Ont., driver.

“It’s funny you say that because that is what I said on the front straightway,” explained Williamson. “Everybody wants to talk about how good Stew (Freisen) and Matt (Sheppard) are, yet in the last year and half, we’ve passed Stew at every big race and drove away with the money so I don’t know what I can do to gain a little bit of Facebook respect from everybody.

“We’ll just keep our heads down and keep working and the end of day we don’t need people to say that we’re the best, the god, the GOAT or whatever. We just need to keep working hard and focus on ourselves and that’s what we are going to keep doing. To have the guys behind me that I do believe in me is all I need and to know they are willing to do what it takes to get us to victory lane is what it’s all about and what matters to me the most.”

Everyone also thinks that because Mat is Randy Williamson’s son that the cars Mat drives for all his teams are always new and fresh and that is simply not the case at all. The No. 3 Behrent’s car that Matt drove to victory yesterday is a car that is three years old that they just keep racing.

“This car I was driving today is a 2018 Bicknell and I said that to the last lady that interviewed me,” said Williamson. “We’ve won a couple of big races with new cars and I make a point to say that it is a new car, but people tend to think that they always need new stuff to run good and it ‘s funny how that works out.

“This car was built for Tommy Meier back in the day when he drove for Jeff. It doesn’t have a hundred races on it, but it ain’t new but no means. The Buzz Chew cars are all 2020’s or 2019’s, they don’t have any 2021’s in the shop and I think only one of Jeff’s cars are new out of three. We certainly have good stuff, and I am very fortunate to drive for great car owners that give me good equipment, but by no means do you need new cars to win every race.”