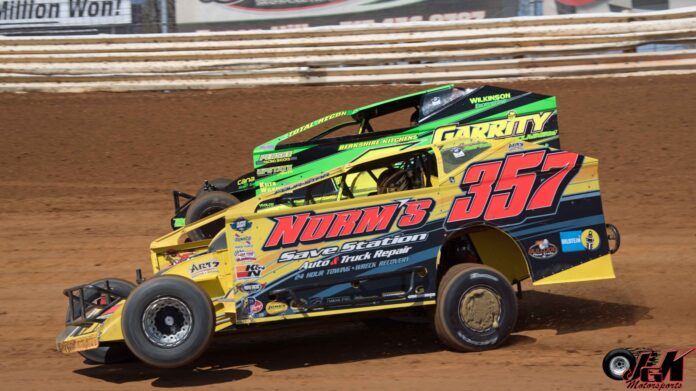 2020 found Mooresville, NC driver “Mad” Max McLaughlin racing mostly on asphalt as he looked to further his career on that side of racing business. McLaughlin did manage to find time to race for Brett Hearn in the iconic Madsen Overhead Doors No.20 at the Orange County Speedway when his schedule permitted with some impressive runs.

When DIRTcar replaced Super Dirt Week last season with OKTOBERFAST due to the pandemic, Vic Coffey offered McLaughlin a ride in one of the Coffey Racing Enterprises Modifieds to compete. McLaughlin didn’t let Coffey down as the young driver registered his first ever Super DIRTcar Series win in the series finale at the Weedsport Speedway. McLaughlin was also very impressive during the Speed Showcase 200 weekend at the Port Royal Speedway which turned a few heads.

2021 will find the very personable McLaughlin reversing his 2020 aspirations as he has decided to concentrate more on the dirt aspect of his career while still keeping the big picture in hand as he looks to one day get into NASCAR. It was a big decision for McLaughlin, but it all came down to one specific point for him.

“This will give me the best opportunity to win as I see it,” said McLaughlin as he explained his decision to race dirt more often this season. “I probably could’ve gone asphalt racing in lesser stuff this year, but I just want to win. I think the thing that set this all off and helped me make my decision was winning Weedsport. Just that feeling of getting back to victory lane and on such a big stage just kind of lit a fire under me and made me think that I want to do that all of the time.

“It’s funny how it all worked out really. Last October was supposed to be just a one-shot deal, we were only supposed to run the OKTOBERFAST and be done. Then they said hey, let’s run Port Royal and we ran top five there all day then we had the scoring error happen at Eastern States or I think we would’ve been top three there also.”

Although most of McLaughlin’s 2021 season will find him racing on dirt, he will be hitting some asphalt shows along the way.

“I am still doing some asphalt racing this year,” stated McLaughlin. “I will be in Martinsville in two or three weeks just a couple of days before the Super DIRTcar Series race at Can-Am. I will still be doing a lot of asphalt racing for Gary Putnam in his asphalt Modified along with some truck stuff and ARCA stuff with Toyota.

“It’s not like I am giving up on it, but I think it makes you a better race car driver if you move all around and when the right opportunity comes for me to run an asphalt car that can run up front and be able to get the funding to run the right stuff like a truck for the Hattori’s I think we can definitely do some damage.  So, right now I am just trying to do what is best for me and make me the best race car driver I can be and I feel like having these opportunities will do that.”

McLaughlin has been down this road before when it comes to dirt track racing, but it seems like in the last year, he has been able to make the leap between being a contender to being a winner.

“If you look results wise, I think last year was definitely our year when everything just started to click for me,”  said McLaughlin as he talked about taking the next step in his dirt career. “Even the year before if you look at it. I led 99 laps of 100 laps at Canandaigua and ran over (Erick) Rudolph and made a mistake.

“I think the biggest thing was that I was trying too hard because I wanted to win a Super DIRTcar series race to bad. We went to SDW that year and were leading late in the race and really thought we had a shot to win, but then had a loose wheel on pit road and that ruined our day. Eastern States that same year we led about 100 laps and had a parts failure and ended up flipping.  We just never could put it together and when I started driving for the Sweetners Plus team it just started to click. We got that first win and it started to click after that. “

This year the Sweetners Plus team started out racing in Florida at the STSS Sunshine Swing and even though there were no wins, finishes of fourth, fourth and eighth were a good indication of things to come as the Modifieds moved over to the Volusia Speedway for the annual DIRTCar Nationals. McLaughlin and the team had a great week of racing coming back north with a win to go along with two fourth place finishes and a ninth-place finish. McLaughlin was awarded the “Big Gator” for winning the weekly points title.

“We were very good in Florida,” mentioned McLaughlin, “It would’ve been nice to get another win or two, but we finished every race in the top ten. We did get one win and the championship at Volusia so that was good.”

2021 will find McLaughlin returning to drive for Vic Coffey in the Coffey Enterprises No. 32C in New York and on the Super Dirt Car Series and on the Brett Deyo Short Track Super Series, McLaughlin will find himself strapped into the iconic Norm Hansell No. 357 in both the North and South Regions. It is a year that will find McLaughlin doing a lot of dirt racing along with a lot of traveling going to and from races but as a young man, I am sure he is up to the task.

“This year I be running both the North and South STSS races for Norm,” stated McLaughlin as he went over his schedule for the year. “It was pretty cool to get the phone call from Norm and Jay and it seems like it’s going to be a good fit and I am looking forward to driving for them. We’ll be at every dirt series show we can get to with the Sweetners Plus team, although there might be a couple of conflicts with my asphalt stuff. We’ll also try and run as many of the Thursday night shows at Orange County as we can.

“I will be at the opener there and at their other big money shows. Other than that, we’ll try to chase all the big money shows and that’s kind of what we came to an agreement with. Vic (Coffey) is pretty low maintenance and one of cooler guys you can deal with and it’s a lot of fun driving for all of these guys. We’ll be running nothing weekly, just chasing big shows.”