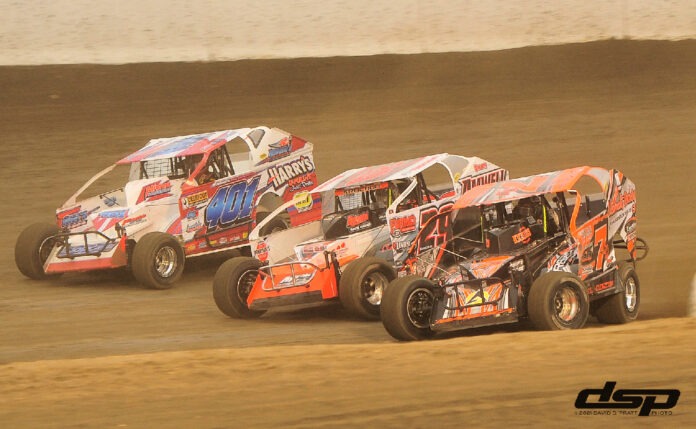 The last time Michael Maresca raced at the new Bridgeport Motorsports Park was last November when he won the final race of the season ending Wildcard Weekend. Maresca came back for the season opener in 2021 and promptly did the same thing as he won his second race in a row at the Swedesboro, N.J., dirt oval.

Maresca locked himself into the Saturday cash dash on Friday night by posting the fastest lap time in the second session of warmups. The way they finished the cash dash was how they would lineup for the 60-lap feature event. Maresca finished seventh in the dash which put him into the seventh starting spot for the Doug Hoffman Memorial.

The Potsdam, N.Y., driver wasted no time getting to the front and was running third when the yellow came out for the No. 117 of Kevin Hirthler on lap five. When the race resumed Maresca and Joseph Watson waged a torrid battler for the runner-up spot as leader Duane Howard was starting to put some distance on the field.

Lap 19 saw Howard’s No. 15G start to show wisps of smoke and one lap later the smoke was billowing out the back of Howard’s car. Lap 21 saw the yellow come out for Howard as coasted to a stop in the infield after laying a smokescreen over the track.

“Duane (Howard) was really good today and would’ve been really tough to beat,” cited Maresca as he talked about racing behind Howard. “I caught up to him, but when he started to smoke, I had to back-off a little because I was blind behind him there. When he would roll up, his car would just dump oil and I couldn’t see anything, and I was really worried about running into him.”

At this point, Maresca who had finally worked his way by Watson just before the yellow came out was now you new leader. From this point of the race, it was all Maresca until late in the race when second place running Mike Mahaney started to close the gap between himself and Maresca.

Mahaney was now right behind the leader when the five to go signal was displayed but Maresca was still holding Mahaney off lap after lap. Finally, on the last lap, Mahaney made a last-ditch effort to snatch away the win by diving low as the leaders entered turn three.

Mahaney sent it in hard and slip up in front of Maresca but could not get the car to stick and drifted high allowing Maresca to turn back under Mahaney to take the big win along with the $6,000 winners share of the purse.

“Man, I like this place. It is racy and it is fun,” said a jubilant Maresca while the crew loaded the car after a lengthy post-race technical inspection. “I like coming here.  Anytime you can come to a track that you actually enjoy and have fun driving it, it really makes you want to come back. I tried to conserve the car and tires there for awhile because I knew those guys behind were going to be coming and they did.”

Maresca went on to talk about Mahaney’s last ditch effort to get by him for the win on the last lap.

“I knew he was most likely going to do that,” said Maresca. “I was ready for it. You expect when you are starting to close up to the lapped cars and you start slowing your pace to try and save the tires and not get a flat. You know it’s going to come, and you just try to prepare yourself, breathe and be ready for it. Mike did what I thought he was going to do, supposed to do and luckily he wasn’t able to hold it down.  I was able to turn back under him to pick up the win.

As mentioned before, it was a lengthy post-race inspection for Maresca and the No. 7MM, but when all was finished Maresca was given the thumbs up for the victory.

“It was a long time there getting through tech,” mentioned Maresca. “My boy Ray (Bridgeport tech inspector Ray Carroll) looks through everything thoroughly, which is good. I would rather have them do a thorough tech and check what the need to check. They checked our carburetor along with the body and the cubic inches of the motor. This is our DIRT 358 motor, so it’s not sealed so they have to do all of the nitty gritty on the motor. They can pull the head if they want to, it doesn’t matter what they do to me. I would rather have them do a good tech than have to deal with the BS afterwards of people talking because you are doing good.”

After starting out the season on the STSS series driving the teams DKM chassis, the R&M Racing team decided to debut a new Bicknell chassis this week at Bridgeport Motorsports Park. The team worked feverishly all weekend to get the new car dialed in and ended their weekend with a hard fought third-place finish.

“It was frustrating last night and today,” said Godown as he explained the trials and tribulations of getting the new car up to speed. “My guys kept working the whole time and we’ve changed a lot to get it where it is.  I need to thank them all. Mike Carlucci, Sam Godown, Alex and everybody that came and helped us here this weekend. This whole shooting match is run out of our shop now and we’ve put a lot of hard work into the offseason to get it where it needs to be and we still have some adjusting to do yet.”

It was the first time Godown will have a Bicknell at his disposal on a regular basis in several seasons.

“I haven’t run a Bicknell car other than Jamie’s (Jamie Mills No. 30) in a few years and there have been so many changes to them, so I have to get into the swing of things with them again,” mentioned Godown.  “I don’t think we finished this car up until about 3:00 AM on Thursday, so it’s been a little exhausting over the past few weeks, but it’s good. I couldn’t do this without my sponsors like Camp Out, Ellery’s, Precision Hydraulics, Billy the Kid Performance Engines, Izzi Trucking. This is more them than me, I get the easy job of getting to be behind the wheel.  They work their asses off to get this done and we had some down heads the past two days, but we just have to keep digging to figure this thing out before the points season and we will.”

Godown, who started 14th in the 29-car starting field, slowly work his way towards the front and eventually work his way up to third spot which is where he stayed to the finish.

“I don’t know if I had anything for the top two, at times I thought I did but they were probably trying to save their stuff as well,” said a content Godown while waiting for his son’s feature event to start. “I started 14th so I couldn’t really save anything.  It’s tough. If you don’t go hard early you might get passed and if you do go hard early you take a chance of blowing a tire and that’s what I was worried about. I thought maybe it I could get with them in lapped traffic I might’ve been able to do something, but you never know, those two guys (Maresca & Mahaney) race a lot and have won some races so you never know what could happen in lapped traffic.

“It was a good start for us, obviously we have to do a better job coming out of the box especially when it’s slick and tacky and that’s the stuff we need to work on. We ran a DKM the first two weeks, this week’s a Bicknell so it’s a little different than what we are used to, and we are still learning how to work with these coils. When you go from the Troyers we’ve been running to these things it’s been tough. Every car wants something different, and it is our job to figure it out what it wants.

“I also want to say top of the hat to Doug and his guys for making the track good for the feature.  I know a lot of us were worried about popping tires, but I don’t think we had one flat all race due to the track. The track was good, especially for a day show and that is a credit to Doug and the track crew.”

Duane Howard won the cash dash on Saturday putting him on the pole for the feature race. Mike Mahaney was second…

The new Howard/Getz combination has had a rough start to the 2021 season and on Saturday the team had everything going their way to right their season. Howard starting from the pole in the feature took off and was looking very strong leading the way. But unfortunately, the team’s bad luck continued as the No. 15G started to show smoke on around lap 19, lap 21 saw Howard pull to the infield as heavy smoke billowed from the car…

Danny Bouc made his debut aboard the Norm Hansell No. 357. Bouc was very fast early on in the day setting fast time in his heat group but a bad tire choice hampered their feature effort relegating Bouc to a 14th place finish…

Billy Pauch Sr., was a no-show on Saturday after hurting his motor during Friday night’s practice sessions…

Multiple-time track champion Ryan Watt had bad day when the rear axle snapped on the Roberts Racing No. 14W ending his day on lap 11…

Timmy Buckwalter was running away with his heat race when a shock mount broke. Buckwalter was not able to qualify through the B Main forcing the No. 51 to take a track provisional for the feature race. Neal Williams and Clay Butler were also granted provisionals…