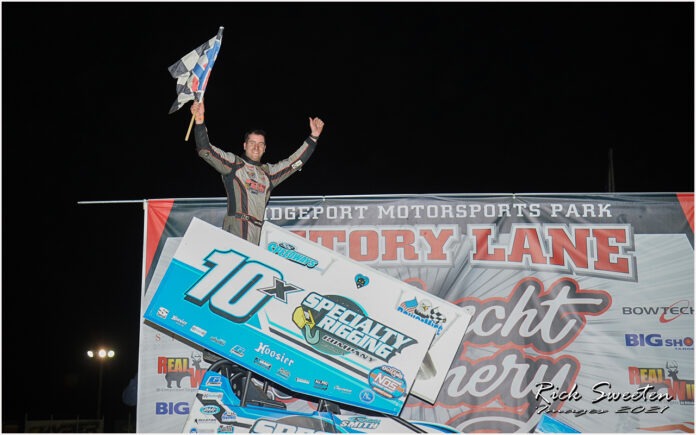 It has been a rough couple of years for Ryan Smith on the local Sprint Car circuit. Smith thought he had the ride of his life when he was chosen as the driver to replace the late Greg Hodnett driving the Mike Heffner owned Sprint Car.

Sometimes things do not quite work out as planned and the pairing was strong, but not what the either driver or owner were expecting. That led to Smith coming to the racetrack each week with a lot of pressure on him which in turn took the fun out or racing for the personable driver know as the “Kunkletown Kid.”

“The last two year have been trying for sure,” explained Smith after his win. “Those were huge shoes to fill and a lot of pressure that goes along with filling those shoes, plus I kind of had to do it on my own without any hired help or crew chief and I ended up just trying to do too much. We did okay, we had plenty of top fives, but we just couldn’t win enough like we needed to, and I just cut myself too short for time and kind of got burned out to be honest with you.”

It was tough for the young driver to get himself motivated to go racing and Smith even thought about getting out of the sport that he loved.

“For the last six months, I wasn’t even sure I wanted to keep racing,” said Smith. “It was that bad and when you get to that point of getting that top tier ride and you can’t get it done you start saying to yourself ‘do I really want to do this’. You have to have fun racing and I wasn’t having any fun.”

Winning has a way of turning things around and Saturday night Smith climbed aboard the Brad Nowatarski owned Specialty Rigging No. 10X for the 25-lap URC feature event. Starting from the 15th position, Smith was a rocket right from the start and was second by the completion of lap six. By lap 10, Smith had worked his way past leader Brian Carber and was gone taking the big win to open his season.

“To come here for night one of the year turned out to be a good decision,” cited Smith. “It was a lot of fun and that was even before the feature. With the way the track was we weren’t even sure we were going to run the feature. We wanted to see how the track turned out and then I took the green and said ‘hey, we are going to stick this out’. It was cool to get a win tonight.  We were here last year and had a second and a fourth but weren’t able to get our picture taken, but the car was fast, and I had a lot of fun which was important to me and was what I needed.”

Smith referred to the track conditions in his comment regarding not being sure of running the race and that was in reference to the track being tough on tires in the URC B-Main and not being sure the tires could handle 25-laps around the high-banked oval. All proved to be okay as the track held up nicely throughout the three main-events of the night.

“We weren’t sure what to expect with the track after the heats. We skinned both rear tires off and it was locked down,” mentioned Smith. “I wished (Richie) Tobias didn’t go out there and cut it up or anything but I’ll tell you what, he is a mad scientist when it comes to working dirt because he just went out and put some water on it and squeezed it a little bit and it lasted 25 laps.  It actually made for a good race.”

If this past weekend in any indication, Smith is set to have more fun in 2021 as explains what his plans are for the upcoming season.

“We plan on running this car for Brad (Nowatarski) who runs Specialty Rigging and is my boss there as well,” mentioned Smith. “Brad put this 360 car together probably about three years ago and has only ran it a few times. He had little Freddie (Rahmer) in it a couple of times and Brad just bought a 410 motor, so we will bounce around there a little bit for the bigger shows in the area and have some fun.

“I still have the DeNucci deal I ran last year and were going to roll that out next week at Port Royal hopefully. He is way up towards State College, Pa., so I am going to go up there tomorrow (Sunday) and finalize everything and help finish the car. If the weather is good, we’ll run next week and if the weather ain’t to our optimum temperature we’re not going to race and we’ll take the weekend off. We just want to have fun; we don’t have to race 90 races a year. Don’t get me wrong, I love racing Sprint Cars, but I was just burnt out before and now I just want to have FUN again.”