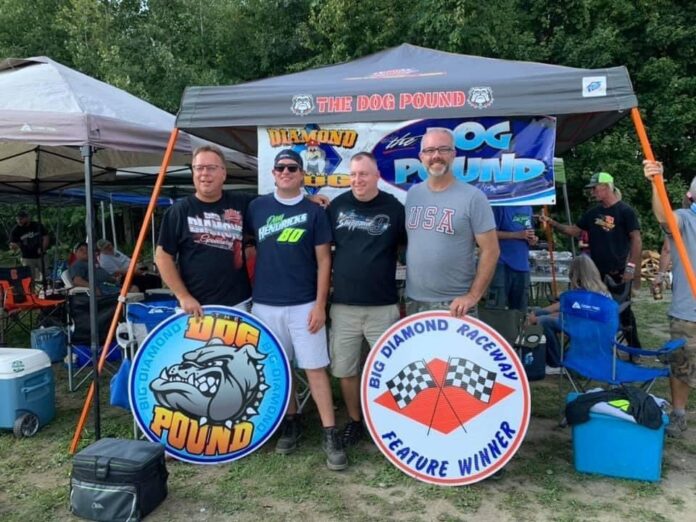 Enter the track at Big Diamond Speedway any Friday night during the racing season or any race night at the track and instead of turning right and heading towards the pits or grandstands stay to your left and head out along the tree line. Most nights, there will be canopies set up with people tailgating and grilling but about halfway down the lane there is a group of race fans that are there earlier than anyone else always set-up and looking forward to watching another night of dirt track racing at their beloved Big Diamond Speedway. That group is the affectionately known as “THE DOG POUND”! 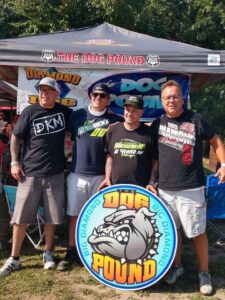 Williams Grove Speedway has it’s well known “Beer Hill Gang” and they are awesome people who support The Grove so much but let me tell you, the Beer Hill Gang has nothing on the Big Diamond Dog Pound! This group of individuals led by founding member and lead pound keeper Brad Keitsock does just the same, if not more for the drivers at Big Diamond along with the track itself by promoting upcoming events or driver additions on social media. I have become friends with many of the Dog Pound members and they truly are a dedicated bunch of race fans who love their home track of Big Diamond Speedway.

Big Diamond owner Jake Smulley said, “The Big Diamond Dog Pound is a great group of race fans who are dedicated to being there on Friday nights. They are often the first ones there to setup in the parking lot and usually the last ones to leave.”

The Dog Pound has come a long way in recent years and is widely known at the speedway with plenty of race fans stopping by the Dog Pound compound to say hello and share in a beverage of their choice. It is the place to meet and swap stories and it is an experience any fan who comes to Big Diamond should partake in.

The Dog Pound came together approximately 15 to 20 years ago when Brad Keitsock started posting on message boards on the internet and it has just grown from there.

“It all started when I started posting on message boards,” explained a very humble Keitsock. “I used to refer to myself on the message boards as Diamond Dog and posted results and news about upcoming races for Big Diamond, and then somehow, I started to become popular on there and people would stop by and see me and my friends at the track and someone just started calling it the dog pound and it stuck. There were a certain few of us back then and we were the early crowd and it just became knows as the dog pound and that is how it all got started and it just took off from there. Actually, I can’t believe it’s been that long, man time flies by.

“It was a bunch of us who got there early like myself, my brother Doug, Vince, our older guy Billy Decker, not the race driver, but we call him the original Billy Decker, Kevan Schaeffer and a few others were the guys who were there weekly and were always there early. We have others who are there pretty much every week, but they have to work and don’t get there as early but now we have so many people who just stop by to say hi. It’s hard to pinpoint who it is that is really part of it because of the other people who stop by to talk to us every time they are there.”

Over the years, the Dog Pound has grown extremely popular in most part to their Facebook page started by Kevan Schaeffer. Doing that has made the popular hangout even more well attended.

“Ever since Kevan (Schaeffer) started the Facebook page, it has just taken off,” mentioned Keitsock. “Kevan has been behind a lot of things we’ve been doing like the stickers. We had a buddy of ours Joe Adams make some stickers for us and whatever profit we make we give back to the drivers. Through the sales of the stickers we were able to do the hard charger award for the Georgie Stevenson race last year. We sold out of the first bunch and had to have some more made and with those we wanted to do something for the Coalcracker weekend. These were all Kevan’s ideas, and he asked me about it before doing them, but it’s turned out to be more than we expected. To make it even better we had people just hanging out with us who wanted to donate to the awards, so we were able to give back even more and spread the money out to all the divisions.”

This season the Dog Pound has stepped up their game even more with the sales of Dog Pound t-shirts. The response from the racing community has been over the top, and once again, all profits from the t-shirt sales will go directly back to the racers and do not think the racers don’t notice as numerous drivers stop by the dog pound either before the races to say hello to everyone or after the races to share an adult beverage with pound members.

Billy Pauch Jr. has always been a supporter of the dog pound who stops by regularly when he has the time and never forgets to give them a shoutout during an interview.

“The Dog Pound is starting to be almost like the Beer Hill Gang at the Grove,” said Pauch “Or the Chili Bowl Rowdies. It’s a great group of friends that help bring atmosphere to the track and that is huge in this day and age.”

Big Diamond Speedway announcer Dino Oberto, who is president of the Eastern Motorsports Press Association (EMPA) has only been announcing at the track for a little over the year and Dino has become a supporter of the dog pound and mentions them often during the night’s events.

“When I became track announcer at Big Diamond Speedway last year,” stated Oberto as he offered his thoughts on the Dog Pound. “It wasn’t long before I was introduced to Brad (Keitsock), Kevan (Schaeffer) and the infamous Dog Pound gang and may I say right from the get-go they made me feel very welcomed considering I was the new kid on the block. I soon learned what a huge part of the action at BDS as they are, and I truly feel you would be hard-pressed to find a more loyal and dedicated group of enthusiastic and yes at times crazy fans who are so supportive and passionate about their home track.

“Never is there a day that goes by on social media that these guys are in some way promoting BDS from the drivers to the history or whatever kind of event that is taking place. And another cool thing is when they’re not at the track, they take the Dog Pound and Big Diamond along with them whenever visiting another speedway. Bottom line, they are part of the experience at Big Diamond speedway.” 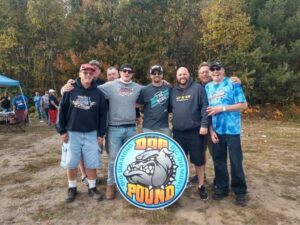 A couple of times each year the members of the Dog Pound take their show on the road to a special race in the northeast and it is not uncommon for drivers from the area and track they are attending to stop by for a picture with the crew. The boys have become a sensation everywhere they travel. Okay, that may be a little over the top, but my point is that they are recognized just not only at Big Diamond but wherever they take their traveling show.

The members of the Dog Pound are just fun racing folk who I love to stop by and chat with, I wish I could do that more often when I am there and in 2021, I hope to do that. I have found a great friend in Brad (Keitsock) who helps me out all year long with many things and for that I can’t thank him enough. I have also gotten to know Kevan (Schaeffer) fairly well over the past couple of years and to watch what he is doing with the Dog Pound is awesome to see and I am proud to call him a friend.

At the end of my talking to Brad, I asked him to describe the people who hang out at the DP.

“It’s just a bunch of guys who enjoy hanging out at Big Diamond who enjoy the racing there and have grown up there.”

To sum it up, if you have a chance to go to Big Diamond Speedway and have not stopped by the Dog Pound, please do yourself a favor and make it a point to do so. The talk is free, and the beer is cold. You will not be disappointed.

If you have any questions or comments, I can be reached by email at dirtracefan25@hotmail.com or on Twitter @dirtracefan25