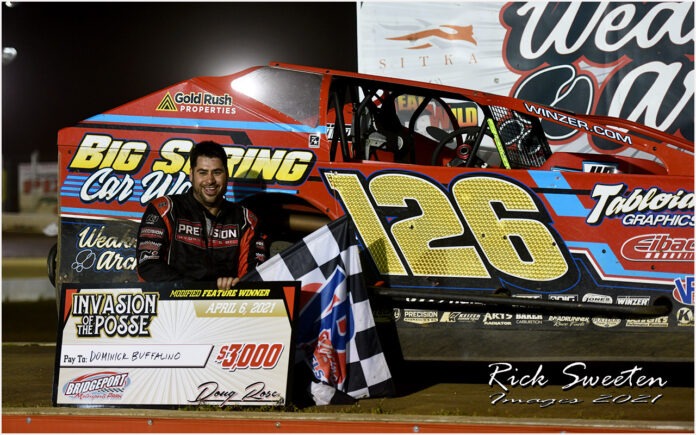 As we head towards the summer, it looks as Dominick Buffalino is started to heat up as the Sayreville, N.J., driver won his second race in a row on Tuesday night at Bridgeport Motorsports Park. Buffalino was coming off a nice win last Saturday at New Egypt Speedway and you could tell his confidence was back. Driving the iconic No. 126 for owner Glenn Hyneman, Buffalino was trying to live up to the hype of driving such a famous car and if what we have seen in the past week remains true, Buffalino could be in for a career year.

“Two in a row, wow. That’s pretty exciting,” said a subdued Buffalino as he accepted congratulations from the fans. “I’ve been in a lot of cars and I’ve done good in a lot of different cars.

“I knew if I could just get the opportunity in a car like this, I could do something special. The first couple of weeks didn’t start out like a ball of fire in those big shows with a lot of cars and then we came to Bridgeport opening week and thought okay, this is our time to shine, but then something happened to the car and I didn’t find that out until last Saturday. All week I kept thinking was it me, am I this bad? Then we found something and once we fixed that problem, we’ve won two in a row.”

Buffalino was obviously feeling the pressure to be driving for such a high-profile team and it was weighing on him. Sometimes when you feel pressured you push yourself so hard and grip that wheel so tight that it takes the fun out of driving. Winning a race or two always helps to relieve that pressure and Buffanlino wasn’t afraid to talk about that.

“Driving for Glenn (Hyneman) obviously adds to the pressure for sure,” explained Buffalino. How can it not? My uncle told me yesterday that now you just have to go to Bridgeport and win and I said no, actually I don’t. I just have to go and run good, and everybody is fine because we won a race already, but after winning again tonight makes me just want to win more for everyone involved with this team.”

Starting the race in the sixth spot, Buffalino worked his way through the field and, after a spirited battle with Ryan Krachun, was able to wrestle the lead away from Krachun on lap 19. Buffalino looked to get away from Krachun, but the young driver had other ideas as he found another gear in his No. 29K and began to pressure Buffalino to take back the lead.

Krachun tried everything he could think of to get back by the high-flying No. 126 but to no avail as Buffalino streaked under starter Ken Golden’s checkered flag to win his second race in four days in the state of New Jersey.

“You know, you get the lead, and you don’t want to mess up while leading,” Buffalino said.  “There’s no reason to want to outrun yourself when you are in front, so you just try to be smooth. When I was running second, I ran really hard to catch him and I waited for the right opportunity to pass him. Then I got the lead and I thought I was able to get away, but I calmed myself down because it’s not hard to hit the fence here.

“Then he ran harder and caught me, I saw him underneath me a few times trying to slide me, but I knew he wasn’t going to come across into me, that’s not how Ryan (Krachun) drives so we could really race hard together and have fun doing it.

“I want to thank Glenn and Bonita (Hyneman) and everybody who helps me out. Ray (Carroll) for his engines, they run really well. I just want to keep this momentum going and win again on Saturday.”