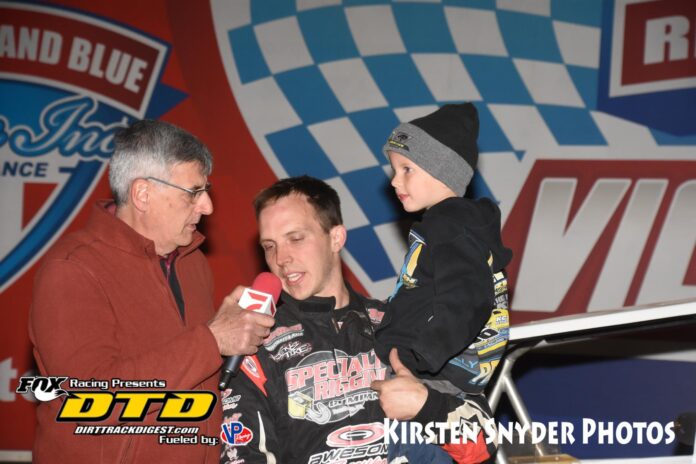 It has been a long time since Billy Pauch Jr., has set foot in victory lane at Big Diamond Speedway for a Friday night points paying race, July 26, 2019 to be exact. Last Friday night Pauch let the competition know at the speedway that he is back and a force to be reckoned with on a weekly basis in 2021.

Pauch looked like he had the race in hand in the late going but a strong running Ryan Krachun had other ideas as he took advantage of a late race restart to get past Craig Von Dohren and immediately started to apply the pressure to Pauch. As Pauch entered turn three on lap 28, Krachun saw an opening and made the move to get by the leader and lead lap 29.

Pauch never gave up the chase and pressured the young veteran through turns one and two waiting for Krachun to make a mistake. Pauch got his wish when Krachun dipped his tire a little too low in turn two and skimmed the yuke tire with his left front wheel. That caused the driver of the No. 29K to lose his momentum allowing Pauch to power back around to retake the lead as the leader raced into turn three on the final lap.

Pauch made sure to keep his No. 15 as low as he could to hold off Krachun for the big win. For Pauch, this win was a longtime coming after a couple of years of struggling at his Friday night home.

“It feels really good to get back to victory lane here at Big Diamond,” said an elated Pauch inside his hauler after the win. “I’ve been saying that to myself, that it is about time. I’ve been shut out of the weekly stuff since probably August 2019, and it really sucks to be honest with you.”

Last season Pauch divided his time at Big Diamond driving his No. 15 and the No. 14 Breitenstein and could just never find the feel in both cars that he needed to be consistent on a weekly basis. After some hard work throughout the winter, Pauch finally has a car that he is confident with to be a contender weekly at Big Diamond.

“This car was really good tonight, but you see at the end we still have some fine tuning to do,” explained Pauch. “Towards the end of the race the car started to hang a little and I just couldn’t keep it as low on the track as I wanted.  We have some things we need to do to get it better yet, but I was happy with how it ran tonight. The car comes off the corners really good, but you know me, it can always be better.”

As good as Pauch’s car was Friday, it always helps to have some luck involved and Pauch was a recipient of that when leader Jeff Strunk clipped a yuke tire going into turn one while trying to put a car a lap down.

“Jeff was pretty quick there early on, but I think even before he had his issue that Craig (Von Dohren) and myself were running him down,” cited Pauch. “We changed our lanes a little and Strunky never found it and that is what cost him the race because he kept it on the bottom too long.

“I had a nice rhythm going there as I was catching him. I would’ve liked to have seen what we had for him, but I’ll take it any way I can get it. I’ve lost races like this plenty of times so this makes up for some of them. It will make getting up tomorrow morning at 8:00 AM to wash this thing feel a little bit better and after that I can go watch the little guy at soccer practice before I have to leave for Fonda at 12:30 PM.”

Pauch had plenty of praise for the young Krachun for the manner in which they were able to race together without incident.

“Ryan (Krachun) surprised me there at the end, I really thought it was Craig (Von Dohren) trying to get under me there at the end,” Pauch explained about their end of the race duel. “He (Krachun) was awesome at the end.  I have to say hats off to him, he has come a long way in the past year. He is getting there and is on his game, so we have to be a little better to keep up with him. Ryan raced me clean every lap, he could’ve used me up if he wanted to and I appreciate that.”

Ryan Krachun has arguably been the fastest car through two race this season at Big Diamond Speedway. Opening night, the young driver in the Amwell Auto Body No. 29K finished a very strong third after falling back early on in the race and last night Krachun had his first win in his sights when he made a small driving error allowing Pauch to drive back around him for the win. It was a lesson learned for Krachun and instead of being all dejected and down, the personable driver was his usual upbeat self when I asked about the last lap.

“Man, we almost had the first one tonight, as Krachun explained what happened after he took the lead. “I saw little Billy drifting up toward the top through the turns and I was able to reel him in and get by him as we came around the white flag. The only problem was my line was very low which was close to the yuke tires. I had been decent all night avoiding them, and I just needed to avoid them one or two more corners. Unfortunately, I did not and hit the yuke tire coming out of turn two and that was what cost me the race. I gave it right away!

“I worked hard to get up there only to give it away, but I can’t be upset with the progress that we’ve made. This Morgantini power plant under the hood is the best motor I’ve ever had and with the support we get from Bicknell and DIG Shocks we’ve been able to dial this car in little by little and trying get it better and we’re getting closer and closer to that consistency we’ve been looking for. Now we just need the driver to get a little bit better so we can get that first win here.”

The Modified count was 26 on Friday night with heat wins going to Jeff Strunk, Shawn Fitzpatrick and Rick Laubach…

The Ricky Yetter No. 5 made it’s 2021 debut at Big Diamond on Friday night with Kris Graver behind the wheel…

Unfortunate incident for Dominick Buffalino in the Insigner Performance Modified feature when his Glenn Hyneman owned No. 126 hopped a competitor’s wheel going into turn three causing Buffalino to straight into the wall causing major damage to the No. 126. Fortunately, Buffalino was okay but the car looked to be a write-off…

The Modified points leader after two races is Timmy Buckwalter who leads Ryan Krachun by a mere five points. Billy Pauch Jr, Duane Howard and Alex Yankowski are the top five so far in 2021…

This Friday is the rescheduled “Money in the Mountains” that was postponed from April, 16th. It will be $5,000 to win for the Insigner Performance Modifieds. Visit the rules for this event on the Big Diamond Speedway website www.bigdspeed.net Friday’s program will also consist of the USS Achey Sportsman, the Savage 61 Crate Sportsmand the the Red White and Blue Autos Roadrunners…