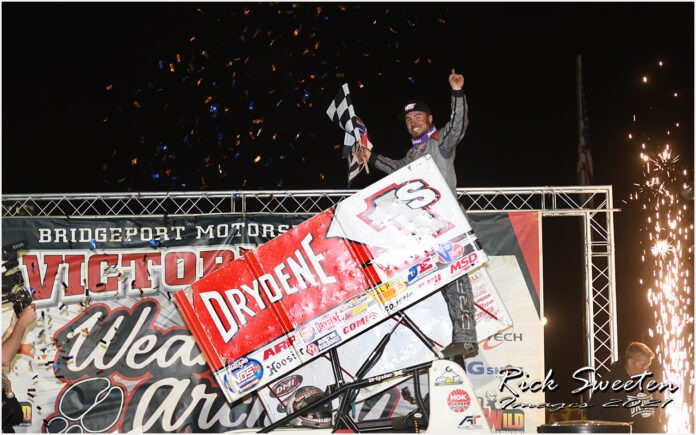 After a breakout season last year with the World of Outlaw NOS Energy Sprint Cars, Logan Schuchart was one of the early season favorites to unseat the two-time defending WOO champion Brad Sweet for the 2021 season championship.

Schuchart started his season off with a strong run at Volusia Speedway Park getting a win go along with other strong finishes. However, that win proved to be the only win Schuchart would get this season as the 2021 season progressed putting the popular Pennsylvania driver seventh in the year long points race.

Schuchart took a big step to turn his season around last Tuesday night when the WoO visited the newly revamped Bridgeport Motorsports Park for the first time since new owner and promoter Doug Rose has transformed the speedway into a four-tenths high banked dirt oval.

With Schuchart having troubles early on in hot laps, the prospects on having a good night was put to a test, but the crew fixed the early troubles and Schuchart was able to win his heat after a heated battle with Donny Schatz.

Starting fourth in the 30-lap WOO feature Schuchart was fast from the start and wasted no time in getting by Schatz and outside pole-sitter Anthony Macri to move into second and then set his sights on leader Carson Macedo. As the lead duo raced through lapped traffic, Schuchart was able to make his move and get by Macedo to take command.

Macedo never gave up and tried to get by Schuchart with a slider on lap 22 but Schuchart was able to hold off Macedo to stay in the lead which he held for the remainder of the race. It was a very popular win for the Hanover, PA driver as the standing room only crowd let out a huge roar of approval as Schuchart exited his No. 1s in victory lane.

“We’ve been fast but have been having some parts issues and failures that we can’t help and just have to keep working through,” cited a happy Schuchart outside his hauler after the big win. “Those things happen sometimes and sometimes we put it in on ourselves. But this win will help get our confidence back. I felt good about tonight and coming in here and for whatever reason I thought this could be the place we could turn out luck around. We had some issues early in the night, but it was nothing serious and was easy to fix.”

Schuchart went on to talk about his heat race and how that helped him get some of his confidence back.

“Our highlight was the heat race tonight when I was able to get past Donny (Schatz) and Brad (Sweet),” explained Schuchart. “I thought we really made a statement there to get us feeling good and get some of my confidence back.  That was the catalyst to get us through the night.

“It feels really good to get our sponsors back in victory lane. Drydene, NGK Sparkplugs and everybody who’s part of this race team works really hard to keep us on the track and this win is for them.”

It was a lap eleven pass of Macedo that put Schuchart up front and after that it was just a matter of being smart for the balance of the race.

“I really think I was a little more patient than him (Macedo) getting through traffic and by being patient I was able to get by for the lead and once out front I just tried to set a good pace and not to do anything dumb. I wasn’t going to move my line until he showed me his nose.  He did on that one restart there when he got a good run on me going to turns one and two, so I moved my line up a little bit. He did get by me that one time in three and four, but I was able to slide back by him and once I did that, I moved my line up to the top and was able to stay ahead. I really wanted to just run my race and let him make the decisions and my car was good enough that I could react to whatever he wanted to do.”

This was the first time the WOO have run on the newly configured track at Bridgeport Motorsports Park and Schuchart was impressed with what Doug Rose and his staff have been able to do.

“This track is definitely better than when we used to race here,” said Schuchart. “The people who did this track have really done an awesome job and the racing is really cool. We were able to move around on the track and pass cars both low and high and that is the sign of having a great track to race on.”

Carson Macedo thought he had the car to beat on Tuesday at Bridgeport Motorsports Park, but once Logan Schuchart was able to get around him for the lead and the win. Macedo left the track an extremely disappointed runner-up finisher.

“Obviously we are disappointed with the end result tonight, especially after being able to win our heat and the dash tonight,” said a very somber Macedo as the crew was loading his No. 41 into the team’s hauler. “So, to come out of the race finishing second is not what we wanted, but we still had a very solid run for out JJR (Jason Johnson Racing) No. 41 team.  I just felt like I made some mistakes in traffic and I think that is what cost me the race unfortunately.

“I think if I could’ve got the lead back on that one restart, I would’ve been very hard to beat. I could set a pretty torrid pace up top and with the clean air, I think I was faster than he was with the open air but I just couldn’t make the pass when I had the chance. It was unfortunate but ultimately, I made the mistake in traffic that probably cost us the race. I was able to slide him the one time, but he made some really good moves and capitalized on them and beat me. It sucks when you think you have a car capable of winning but come up short but that’s the way it is sometimes and fortunately there is another race in a few days to try and get it back.”