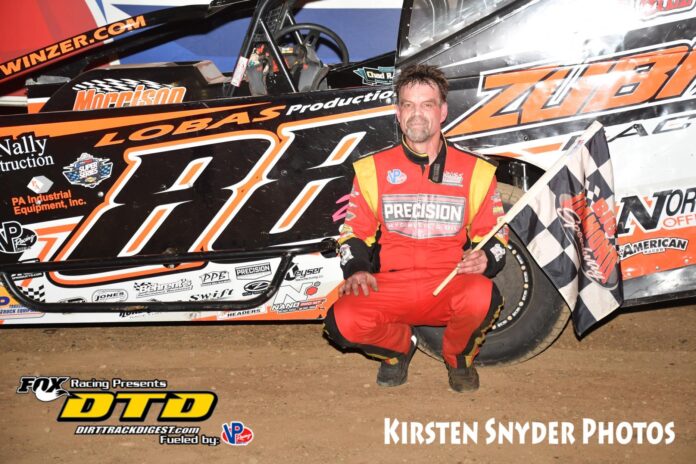 I apologize for the lateness of this article, but last week was a blur with a mid-week race along with a terribly busy workplace I just couldn’t find the time to sit down and get my weekly Big Diamond story to the editor.  Since last Friday was rained out I figured I should try and get it done before the next race.

Everyone knows the story by now regarding Jeff Strunk over the off-season. Strunk lost his ride with the Glenn Hyneman owned No. 126 racing and was forced to scramble to find a ride for 2021. After discussions with other owners Strunk and good friend Dave Zubikowski, who is the owner of Zubi’s Racing, were able to get together and create a second team for the Pennsylvania racing veteran to drive in 2021.

Zubikowski also owns the No. 17Z team that young Dillon Steuer drives.   Strunk first drove for Zubikowski back 2015.  He was rewarded last Friday with a win at the Big Diamond Speedway. For Strunk, it was his 55th career win at the speedway cementing his position as the third leading winner at the track behind Craig Von Dohren and Duane Howard.

Strunk outdueled leader Kevin Beach Jr on a lap 17 restart to take the lead and once out in front, Strunk was able to hold off a late race challenge from Louden Reimert to take the crowd popular win.

“Man, this felt good. It was a long time coming because I should’ve got one earlier in the year and screwed up when I hit the yuke tire going into (turn) one,” said a happy and relieved Strunk celebrating with his crew at the trailer. “I owed the boss (Zubikowski) and the team that one for sure. Now that we got the first one out of the way, hopefully the next one will come a little easier and faster. This win was huge for me and huge for Dave.”

Strunk continued his praise for his long-time friend and current car owner and you could tell the friendship and the respect between the driver and owner as he spoke.

“Dave hasn’t won in a while as an owner, and I can’t thank him and all the people who have stuck behind us through this winter and have helped us to get this deal together. A lot of people went out of their way to help us and without them, our sponsors and supporters we could never have pulled this off and be where we are now.”

It was a journey that started late last winter to get this team up and running and it didn’t come easy for everyone involved.

“It’s been a lot of work, and honestly, I don’t think I’ve seen Laurie (Jeff’s girlfriend) in two months,” cited the still happy race winner. “Seriously, it has been a lot of work, it’s been a lot of new things and a lot of old things. I’ve had some old guys come back that have helped me years ago and we are having some fun. This deal has definitely put some fun back in it for me and again I can’t thank Dave enough. Dave came to my rescue in 2015 when I didn’t have anything and again this year. I am glad to get the win for him, he deserves it more than me.”

Once Strunk wrestled the lead away on the restart from Beach, it looked like he was home free, but a strong running and hungry Louden Reimert moved in to pressure Strunk for the top spot in the closing laps of the race.

“I was skeptical there at the end,” explained Strunk. “I knew we didn’t have as good of car as I wanted to have at that point of the race, and I was starting to hang the right rear out a little in the turns, starting to hang loose. Usually when you are hanging loose at this place it’s not a good thing, but I went to the bottom there after restart with two to go and that seemed to be a little bit better.  I wasn’t sure how close he was at that point. Louden is a good driver and good racer. This is a tough place to get a win at because there are 12 to 14 drivers that could win here on any given Friday. I would say this is the toughest field of cars that have ever raced here weekly over the years.”

The season did not get off to a great start for the “Bechtelsville Bullet” as the team kept having issues early on, but it seems like the Zubi’s Racing No. 88Z team has weathered those issues and all of their hard work is paying off with not only the win last Friday, but a slew of consistent top five and top ten finishes.

“We started out a little slow, some of it not our own doing as we seemed to be in the wrong place at the wrong time, but now we are getting on a roll,” mentioned Strunk. “I think this is the 10th race in a row where we have finished in the top 10 and they are at five different tracks.  That is a feather in our cap as far as what we have going for a baseline set-up.

“Early on we were kind of all over the place there with set-ups and I couldn’t get comfortable with the cars and I was kind of scratching my head there for awhile wondering if it was me or the cars. I think a lot of it was just luck and maybe I was trying too hard as well. Now we seemed to have fell into our place and now we are getting the consistent finishes we were looking for and once you start doing that, the wins will come.”

Strunk has nothing to prove to this writer or the fans. Strunk has always been very personable with me, my fellow media members and certainly with the fans as witnessed by the many cheers Strunk gets when he gets out of his car in victory lane.  I asked Strunk if he felt he had something to prove after the way last year ended.

“No, not at all; I race to win every race,” explained Strunk. “I race hard and I work hard every day, every week and every night. It’s just one of those things where you have to take the good along with the bad. You know, a lot of people ask me if it bothers me that the No. 126 is running good and I always tell them not at all.  I knew they were going to run good, they’ve got best equipment just like Dave got me the best equipment that money can buy.

“Glenn (Hyneman) has the best equipment that money can buy for Dominick (Buffalino) and there are a lot of other guys here at Big Diamond that have the same thing. It doesn’t bother me at all, me and Dominick are good friends, and he got the opportunity of a lifetime that he worked hard for to get and I couldn’t have picked a better guy to be with than Dave. Dave has given me the reigns to run this deal, he got me the equipment and I have a bunch of good helpers that help take the load off of me during the week and I am very thankful for that.”

Louden Reimert has shown flashes of his talent for a couple of years now at the Big Diamond Speedway. Reimert had some good finishes last year, but was just off a little to be able to contend for his first win. However, this year the young driver has been improving each week with top five finishes in the last two races.

Last Friday night at Big Diamond, Reimert was able to pressure the veteran Strunk in the closing laps of the feature to get that long awaited win but came up just short at the end having to settle for the runner-up spot. Although somewhat disappointed with finishing second, Reimert knows he is getting closer to that win.

“We are getting closer, but I still want that win,” said a disappointed, but happy Reimert. “It seems like we are getting closer and closer each week to that win, but we are not quite there yet. I thought I had a chance of getting Jeff there at the end until that last caution came out with two to go. I could see he was running a different line that me and that let me get a nose under him, but I wasn’t sure I would be able to get my whole car up alongside of him to be able to pass him. We had the speed tonight and it’s just a matter of how the track worked out for me at the end of the race.”

The Modified car count for Friday was 26 with Shawn Fitzpatrick, Jeff Strunk and Louden Reimert winning the heats. Timmy Buckwalter was the winner of the consi…

After two good finishes to start the year, Ryan Krachun has had some issues the past two weeks and the driver of the No. 29 had another DNF once last Friday…

Billy Pauch Jr had the motor coupler go bad on his No. 15 early in the feature resulting in a DNF…

Craig Von Dohren was involved in a turn one tangle which ended the race for him. It was the first DNF of the season for the Oley, Pa., driver…

Also involved in the same turn one accident was Danny Bouc in the No. 357. Bouc was having a good run at the time heading towards a top ten finish…

Really nice seventh place finish for Kyle Merkel aboard the No. 291…

We have a new points leader this week as Duane Howard has emerged as the leader of the pack with his consistent finishes so far in 2021. Howard has a 20 point advantage of Alex Yankowski with Buckwalter, Krachun and Kressley the top five…

Coming up this Friday, June 4th. The Insigner Performance Modifieds have been added to the schedule after losing last week to the weather. The Modifieds will join the USS Achey Sportsman, the Savage 61 Crate 602 Sportsman, the Red White and Blue Autos Roadrunners and the Central PA Legends to make for a huge night of racing at Big Diamond…

Mark your calendar for the annual “Anthracite Assault” set for Tuesday June 8th as the cars and stars of the Brett Deyo promoted Short Track Super Series are scheduled to battle for the $5,000 payday. The “Anthracite Assault” will feature the drivers of both the North and South series as they come together for the only duel event of the year…