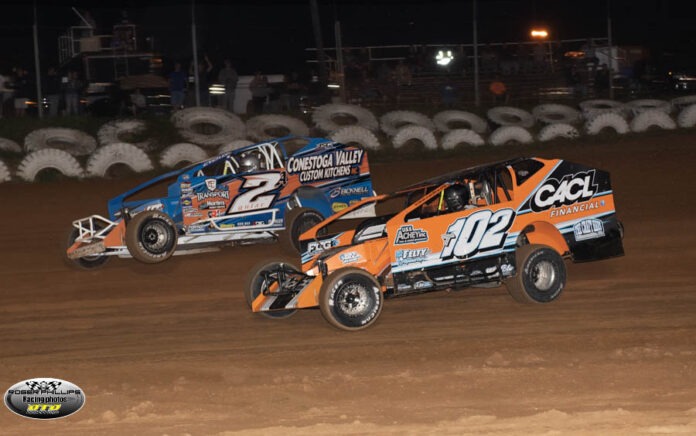 Going into the 2021 season at Big Diamond Speedway, Mike Gular’s goal was to defend his 2020 track championship in the Terry Fasnacht No. 2A. As we all know in racing, things don’t always go as planned.

Gular started out the season with a disappointing 12th place finish in the opener. After taking the next race off so the team could race at the legendary Bristol Motor Speedway with the Super DIRTcar Series, the team came back with a strong third place finish. The next two events saw Gular garner a DNF (5/21) and a DNQ (6/04) when the car developed engine issues in warmups. The one benefit of having a slow start is a better starting position as the season progresses due to the handicapping procedure.

Two weeks ago, Gular took advantage of the primo feature starting spot to lead much of the feature race until a late race pass by Craig Von Dohren relegated Gular to a second-place finish. Although disappointed, Gular was glad the team was starting to get back on track.

This past Friday night, Gular was able to close the deal and pick-up his first win of the season holding off a determined Jeff Strunk for the win. It was the boost the team needed to get their season back on track at their Friday night home.

“Finishing second last week after leading really sucked,” said a relived Gular after his win. “That was twice we got passed for the lead this year. That doesn’t happen a lot, but when it does it makes you work a little harder. We kind of dug into it a little bit and saw where we were lacking and tried to clean that up some. I don’t know if we are 100% yet. I think we are pretty close.”

Gular had to hold off Strunk for the win and did so by keeping his car in the position he needed to hold off his good friend.

“I was just trying to keep the car turning and keep it rolling,” explained Gular. “I saw Jeff there and I knew if I ran the right line, I could kill his momentum and keep him from letting his car float off the bottom.  I knew that would stop his momentum on the bottom and keep me out front. I’ve ran a lot of laps here and I’ve seen them guys them guys do it to me, so I just played the chess match and I was able to bring it home.”

Strunk is a wily veteran racer and has taught Gular very much over the year and subsequently the two Boyertown, Pa., driver have developed a strong friendship which can be put to the test when racing against one another.

“It is nerve wracking racing with him at times,” said a smiling Gular. “You don’t want to get into your buddy, but at the same time we both are racing for the win.”

Starting position is everything on Friday nights at Big Diamond and Gular knew he had to take advantage of his close to the front starting spot.

“It’s a nice gift to start up front after starting at the back of the handicap for the past ten years on the PA circuit,” mentioned Gular. “When the track is as fast as it was tonight, starting towards the front is a big advantage. Everybody was fast tonight and it was good to be up front away from the chaos that was probably going on behind me.”

Strunk Rebounds for a Second-Place Finish

Jeff Strunk was obviously disappointed afterwards for not being able to get the win with his car owner Dave Zubikowski in attendance, but after the past two weeks it was a just nice to get a finish at all. Strunk won his first race of the season a few weeks ago and has shown speed all season long but the past two weeks at Big Diamond, Strunk has had two DNF’s due to spins and crashes that he was caught up in. This past Friday night Strunk was on the chip as he looked to pick up his second win of the season and get his season back in the right groove.

“It was a good run for us tonight, like I said it was one of them deals where the bottom wasn’t the preferred groove tonight,” said a happy Strunk standing with his car owner Zubikowski afterwards. “We were able to make a race out of it, Mike had the preferred line, and we were close there, but he started to get away from me a little at the end. I probably stayed on the bottom one lap too long.

“It was a tough track tonight so going from seventh to second was a good deal, it was very bitey and stayed somewhat narrow tonight, so to be able to finish second was a good night for us. The past month has been terrible for us, I think we only have two finishes, and both were seconds so we know we have some good fast race cars thanks to Dave (Zubikowski) and all of our sponsors and supporters.  We’ll be back next week to see if we can improve one more spot.”

The 2021 start for 14-year-old Cole Stangle at Big Diamond this year has been a struggle to say the least. The family-owned No. 20 team got off to a late start as the young Stangle, who is also an accomplished school wrestler, spent his time concentrating on his athletic endeavors. Once his school athletic commitments were completed, it was time to go racing.

Last season, Stangle ran in the Open Sportsman division at Big Diamond and was very competitive and was able to pick up a feature win late in the season. This season, Cole along with his dad (Ed Stangle) decided to make the move up to the 358 Modifieds at Big Diamond. The season did not start well. Opening night, the team barely ran any laps as motor issues cropped up. As the season went on, more issues developed including one night where the team’s trailer lost both axles on the way to the track. Timmy Buckwalter left the track with his truck and trailer to bring the team’s car to the track, but it just another set of issues the team had to deal with.

This past Friday night saw all of the team’s hard work pay-off as Stangle raced with two of Big Diamond’s best to record a very impressive third-place finish. It was nice to see a smile on the faces of the driver and crew afterwards as I caught up with the young driver to talk about his good finish.

“This really feels great, we have had a rough couple of weeks here,” said a happy Stangle in the pits as the crew loaded up the No. 20. “We needed this for sure. The car wouldn’t run, the trailer broke which was a rough start to the year so this feels great to finally get a good run in the books. Hopefully, this is a start to us getting a couple more.”

Stepping up to the Modifieds after running the Sportsman last season has been a transition, not too mention the caliber of the competition.

“I always talk to my dad and we both like winning, but you know what, running in the top five here is great,” said Stangle. “Look at the competition here, it is some of the best in the business and in racing so to finish in the top three is just awesome. Hopefully we’ll continue to get better, and we can finish up here more often. I feel happy and humble to finish behind them guys (Mike Gular & Jeff Strunk), those guys are great, and I am learning and what better way to learn that racing with those guys.”

This Friday saw 25 Modifieds sign in with heat race wins going to Cole Stangle, Shawn Fitzpatrick and Mike Gular. All cars qualified through the heats with no consi…

After winning his 99th feature event at Big Diamond last Friday, Craig Von Dohren’s bid for win number 100 ended early in the feature event when Von Dohren pulled the No. 88x to the infield after some contact…

Danny Bouc and the Norm Hansell No. 357 decided to take the night off and try and regroup after a less than stellar start to their year at Big Diamond…

Ryan Krachun had very good start this season at Big Diamond. However, they wheels came off and the team has struggled since. Friday night the No. 29k was back in form as Krachun charged to strong fifth-place finish…

Billy Pauch Jr., who has been very fast all season long, did not seem his usual self in the main-event finishing a lackluster eleventh. The team found the problem on Saturday morning while checking over the car. The culprit was a broken rocker arm in the motor…

This Friday night at Big Diamond Speedway will the annual Georgie Stevenson Memorial race with the Modifieds going 30-laps for a $4,000 first place prize. This Friday will also be the 2021 debut of the USAC Wingless 360 Sprints after having their previous visit rained out. The Crate 602 Sportsman and Roadrunners complete show. There will also be a fantastic Fireworks show on Friday to celebrate out nation’s birthday…

The famous or infamous Dog Pound led by wardens Brad Keitsock and Kevan Schaffer will once again offer up some extra money for all the weekly division in competition on Friday night. The Dog Pound will be paying each division a hard-charger award (Modifieds – $400, Crate Sportsman – $200 & Roadrunners – $100) and also a $200 hard luck award to each division (Modifieds, Crate Sportsman & Roadrunners). In addition to that Kevan Schaeffer will reward $100 to the fifth-place finisher in each of those divisions as well in memory of his uncle John “Sonny” Gradwell who raced at Big Diamond Speedway and other local tracks. We thank the “Dog Pound” for their continued support of the racers at Big Diamond…