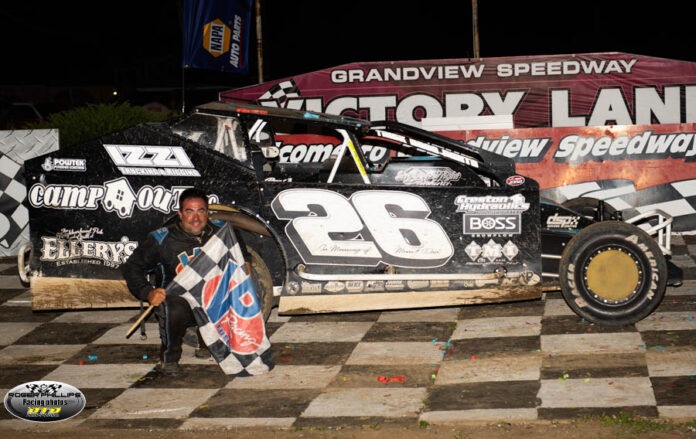 For the past few seasons, Ryan Godown has been traveling around the Northeast racing his Modified at many racetracks. Two years ago, the Ringoes, N.J., driver hopped aboard the Searock Fabrication No. 26 and followed the Super DIRTcar Series trail which took Godown to many tracks in New York and Canada that he had never raced at before. Although the effort did not result in a win on the series, Godown did win rookie of the year and it also provided Godown with experiences along the way to become a better overall driver at his home tracks.

Of course, last season racing was limited due to the COVID-19 situation, but Godown still managed to race his share once again with the Searock team and was a three-time winner at the new Bridgeport Motorsports Park with one other win coming at the Delaware International Speedway as a fill-in driver in the Blue Hen Racing No. 30. It was a successful year, but Godown knew he could do better.

At the end of 2020, Steve Searock put his complete racing team on sale looking to get out of the sport as a car owner. This forced Godown to come up with a plan to continue racing for what was left in 2020 and going into 2021. Enter R & M Motorsports, Godown and long-time crew member Mike Carlucci formed their own racing team, and with an assist from DKM Chassis, put a car together for some late season races.

The newly formed team had some good finishes, but could not get the win they wanted to end the season.  For the past few seasons, Godown has always put out his plans over the winter for next season. This off-season, the team took a new approach and decided to remain exceptionally low key over the winter and just concentrate on building their new team up from scratch.


The R & M team added a couple Bicknell’s to their stable and the strategy has seemed to work for the team as they currently lead the points at Bridgeport Motorsports Park to go along with four wins. The R & M team has also decided to chase the STSS South Series in 2021 and currently sits seventh in South Series points looking to move up higher as they are ready to debut a new Bicknell chassis on the series.

After 2019 when the raced all over the Northeast, many of the crew members were burnt out, so in 2021 Godown and the team decided to take a “less is more” strategy and so far, the results have been what they have hoped.

“It’s been a lot to build up what we have now,” explained Godown. “We have some amazing sponsors that have stepped up to allow us to do what we are doing and without them none of this is possible. We didn’t really know what was happening over the winter and you know what I mean because you and I usually do a story over the winter, but this year I didn’t have anything for you. But like I said my sponsors, Camp Out, Ellery’s Bar & Grill, Mulders, Izzi Trucking, Val-Tech, Strober-Wright Roofing, Creston Hydraulic, TMI Trucking and others have made it possible for us to have what we have right now. It’s really pretty cool that they saw we were down over the winter and they have helped us get good equipment and we just have to keep building on that. I can’t be more thankful for what they have given me this year.

“When the year started, we were a little scarce as far as equipment that we needed for this year and slowly we’ve been able to build up our stock. Mike Carlucci has stepped up along with my brother Butch and they keep giving me good stuff to drive.  I can tell you this year there wasn’t going to be a lack of heart. We had some stuff happen at the end of last year and I thought some other stuff was going to happen, but you get let down and then I said I am going to put my heart into it and build my own team up along with my crew and sponsors. I know everybody puts their heart into their race team, but I can tell you, I ain’t gonna be beat by a lack of heart.”

The team then settled on racing less, but making sure they were one-hundred percent ready to race each time.  So far, the results have paid off.

“We just have to do what the shop allows you to do,” mentioned Godown. “We have three guys who come to the shop almost every day, myself, my brother Butch and Mike Carlucci. My son is there a lot, but he has his own car to work own and that comes first for him. He does help us when he has time, but if he wants to race, he has to work on his own car. You can only race so much.  If you wear yourself out you can’t prepare the cars correctly. Look, this car was prepared for here (Grandview Speedway) last week after we ran it at New Egypt so when we came here it was ready to go, and obviously the results show that.

“We even brought the small trailer tonight because we had everything ready to go. You can see inside we don’t have many spares with us, but we brought what we thought we needed to make any changes. But it goes back to what I said, if your prepared to race you shouldn’t have to make many changes during the night. This is the first time we raced this Bicknell car here, so we weren’t sure how it was going to do with the set-up we had, but it did well. There are still a few small things I think we can do to make it better and we will but for right now we just have to build our notebook up so we will be even more prepared when we come back the next time. Our goal is to be as prepared for each race as best we can and if that means taking a race off here and there that’s what we’ll do.”

Tuesday night at Grandview Speedway, Godown was able to lead all 30 laps to take home the victory in the Bob Miller “Thunder on the Hill” promoted show. Starting second surely helped Godown get to the lead, but he had a hornets nest of Grandview’s best right behind the entire race as Brett Kressley, Duane Howard, Jeff Strunk and Craig Von Dohren battled in the top five with Kressley and Howard taking turns pressuring Godown for the race lead.

“Getting that win was a little unexpected for sure,” said a happy Godown. “Going through the gate you obviously want to win every time, but stuff has to happen your way and you just keep plugging forward. Obviously, we haven’t run this car here and we haven’t run this motor here, so we are still trying to find our stride wherever we go. We drew crappy for the heat, but we were good enough to get into a redraw spot and when Roger from Camp Out drew second for the feature, that changed everything.

“We knew we had a decent car in the heat, but you don’t know how to go for the feature. We were a little tight in the heat, so we freed it up a little for the feature, but we didn’t want to go to far and make it too free. It ended being close to what we were looking for, but I think we can do a couple of things to make it even better.”

Godown was holding off the best that Grandview had to offer, and it really got close and edgy when the leaders came up on the slower cars to put a lap on them.

“It did get close there at the end but the guy on the radio was good at telling them that we were there,” explained Godown. “The biggest thing I didn’t want to see was one of those guys on the bottom switch to the top. I figured if that were to happen, we were going to be in big trouble. They didn’t do that and were able to stay in middle to top. I believe the top was better and if I ran down by the yuke tires I wasn’t that good, so I tried to stay in the middle or up top where I thought I was okay. Look, I knew those guys were behind me and they were fast, but we were fast too. I am pleased we were able to come here with a new car and get the win. I am not saying if the race was another ten laps that those guys wouldn’t have got me but who knows, the race was 30-laps and we won so we’ll take it. I know we started second but when you start up front, a good team will capitalize on that, and we are a good team and that’s what we did tonight.”