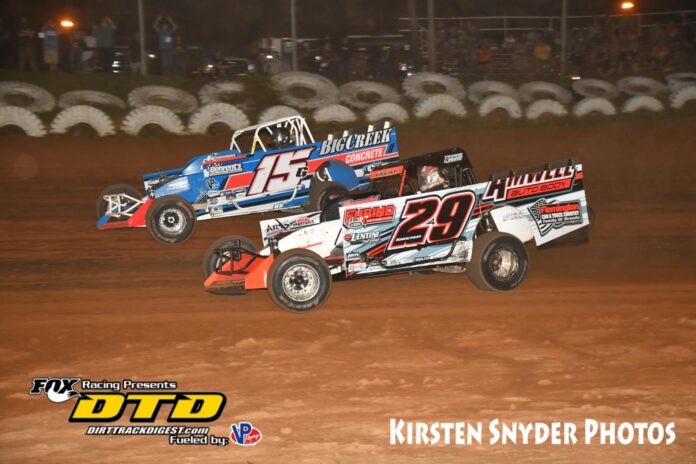 With the nickname the “Diamond Cutter,” one would think that Duane Howard wouldn’t experience such a long drought at the track in which he has a career total of 85 wins to go along with eight track championships. But such was the case, Howard had last won at the Schuylkill County dirt oval back on June 28th, 2018.

This season aboard the Butch Getz, Big Concrete No. 15G Howard has been the model of consistency all season long with top 10 finishes in all but one race at Big Diamond in 2021.  It was a win that Howard was after and last Friday all the team’s hard work paid off as Howard was determined to end his non-winning streak.

“It really does feel good to be back here in victory lane,” said an excited and happy Howard. “With this new race team and everything that Butch (car owner Butch Getz) and his family have put into this, it does feel good to get them the win. We built this race team up over the winter and I think now we are going to start to show just how good we can be. We are going to start heading into these big paying races and I think we have the car balanced the way we want it to be for those, especially the spec motor races. We’ve been struggling some at the traveling races, but I think we got what it takes to knock some of the big money shows that are coming up.”

The team has been fast this season at Big Diamond.  They just couldn’t come up with the perfect night to get that long awaited win.

“We had a good balanced race car tonight right from the drop of the green,” said Howard accepting well wishes from his team at the teams trailer afterwards. “The car just felt so good underneath me.  It has started to feel good for me the last couple of weeks, but nothing like it did tonight. I could roll the middle of the corner right from the beginning of the race. The motor was really hooking up tonight and I could rotate the car when I needed it to. We have been getting better but tonight it just came altogether for us.”

The big key for Howard tonight was getting through the field in the early laps of the race to position himself upfront.

“The thing is, with the great competition here on Friday nights, you have to go early,” explained Howard. “You have to get cars on the restarts here or you finish fifth, which is where we usually finish. I had a lane open right in front of me and the car worked really good there. It is tough to win from the back here, I’m not going to lie. Tonight we had everything go our way and I was able to get Ryan (Krachun) back on the restart. It’s hard to get wins here and tonight we were finally able to get one.”

Krachun was able to pass Howard for the lead and it looked like it Krachun was finally going to get his first win at Big Diamond, but Howard had other ideas and the crafty veteran knew he had to do on the last restart to regain the lead.

“After Ryan got by me and we had that caution, I knew I had to do something to get back up front,” said Howard. “I made a couple of adjustments in the car during the yellow to help me drive it a little straighter into the corners without the back of the car hanging out. Once I got back to the lead, I was able to get into a little groove and I felt much more comfortable out front.  I knew nobody was going to get by me at that point. When Ryan got me there, I had over driven the corner a few laps in a row to try and get him back but then when we got the lead back, I was able to settle down a little.”

There is no doubt that youth movement is upon us in the world of the Northeast Modified/Crate divisions. You can see that at any track, drivers like Tanner Vandoren, Derrick McGrew, Cole Stangle, Alex Yankowski, Danny Buccafusca amongst others are making their mark on the racing world at a young age. Now we can welcome another teenager looking to make their own mark on the competition. That young driver would be Logan Watt, son of multi-time Bridgeport Speedway champion Ryan Watt.

Logan, who was not originally scheduled to driver a crate Sportsman this season, impressed his father at an early season test in Delaware.  From there, it was hard to hold the kid back. Watt has made probably less than a dozen starts this season and last Friday the Boyertown, Pa., driver captured his first ever big car win when he won the 20-lap Crate 602 feature at Big Diamond Speedway.

The kid was impressive as he took the lead on an early race restart and never faltered as he walked away from the field after a lap 18 restart with veteran driver Danny Buccafusca alongside of him. It was a win that Logan surely will not forget along with his parents Ryan and Lesley Watt.

“This was really great tonight,” said the exuberant teenager Watt. “We’ve only been here a few times and haven’t been consistent with the big car since we have been traveling a lot with the quarter midget.  We finally got to race two weeks in a row and it helped me get comfortable with it.  Tonight we had the right car and we were cruising.”

Watt was able to get the lead on an early race restart by using the outside groove which was unusual for Watt who you can generally find wheeling the Ronnie’s Auto Repair No. 4M on the bottom.

“I didn’t know there was a lane choice, I thought we went to the last completed lap because all of the cars didn’t cross the line which is the way it is in the quarter midgets,” explained Watt. “I knew I had to get the jump on the restart.  I did, but I didn’t think I had the lead, and I wasn’t sure if he was still there, but we managed to pull it off.

“I cannot thank everyone enough, my mom, my dad and my crew, Ronnie’s Auto Repair, Birdsboro Auto Parts, VP Fuel, Bicknell, Manmiller Electric, Array Monograms and everyone who helps crank wrenches on this thing. Special thanks to Eric Korman for everything he had done for me and this one was for his brother who recently passed away.”

Billy Pauch Jr., was forced to load up after the heats when his No. 15 developed motor troubles…

Andrew Yoder won the Limited Late Model feature race in dominating fashion. A disappointing field of only seven Late Models signed in on Friday night, the last time the they were at Big Diamond there was a strong field of 18 cars. Not sure why there was such a drop-off…

Friday’s Roadrunner feature had to be the best of the season so far. Five drivers battled back and forth over the last half of the race as they raced two, three and sometimes four-wide with Ronny Suhr Jr picking up the popular win. This was some of the cleanest racing I have ever seen in the roadrunner division with all five drivers having a shot at the win…