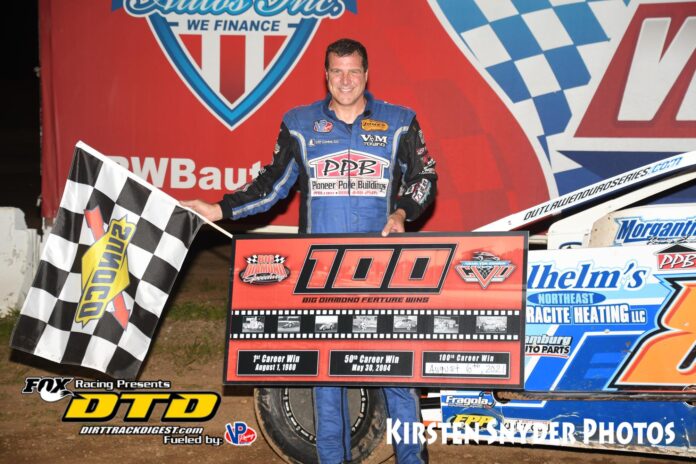 It definitely took longer this season than he expecte, but on Friday night the man simply referred to as “CVD” Craig Von Dohren won his 100th career feature at the Big Diamond Speedway. Von Dohren won the race in a rather unorthodox way, and I am quite positive he would have preferred to do it in a normal fashion.  It was a win nonetheless, and it is an accomplishment that deserves to be celebrated.

For those that missed it, Von Dohren was running in third behind the leading duo of Jared Umbenhauer and Brett Kressley when the two tangled in turns three and four coming for the checkered flag. Umbenhauer spun his No. 5 and Kressley kept motoring on to cross the finish line first, but Big Diamond officials ruled that Kressley’s move was over aggressive and penalized Kressley to the last car on the lead lap. Von Dohren was next in line at the finish and was awarded the win giving him win number 100 at Big Diamond.

“I didn’t know what was going on upfront there,” cited Von Dohren. “At that point I was just being a fan. I just wanted to hit the bottom, I knew Duane was back there so I knew I couldn’t mess around and leave the bottom. I really was just running my race. We weren’t that good, we were okay. I probably should’ve moved around a little, but I did that last week and it cost me. I tried the top there the one lap and thought it was pretty good and was able to close up a little bit on Jared (Umbenhauer) and give it one more shot, but then Brett (Kressley) went by on the outside and I was like son of b****h, but he is always good on the top.”

The win for Von Dohren was definitely a confidence booster for the Oley, Pa., driver who has uncharacteristically struggled at Big Diamond this season with quite a few DNF’s along the way. However, Von Dohren has started to come on lately and it is just in time for the season ending big races.

“It’s getting better, it’s hard to win these things nowadays,” mentioned Von Dohren. “My wife said it best when it came to the struggles we’ve had here this year. She told me that ‘you know, we have been coming here for years and have had nothing but great luck and success for years and everything has gone our way and this year it’s not.’ I also put myself in some positions that I shouldn’t have but if you don’t try you don’t win and now it seems like I am trying but am losing and that’s hard to take.

“Tuesday night I made a bonehead move at Grandview and gave up a good starting spot and lost that race. After that, I kind of took this week to get mentally prepared which I never do. I usually just go and race. I tried to not beat myself up anymore, I did for a couple of days, but got over that and started to concentrate on what I had to come Friday.”

Von Dohren, who will turn 58 years old next week, is not ready to move over just yet. Winning 100 races at Big Diamond is a big accomplishment and with 345 career wins, Von Dohren is determined to add to that total.

“I am not really a numbers guy,” explained Von Dohren. “It’s pretty cool we got our first win here when I was 16 and now we have 100. It hasn’t sunk in yet, but it will. I think I have close to 350 total wins so that would be nice to get, and it would be pretty special. It’s hard to win races anymore, everyone is so on their game and equal. I’ll be 58 next week and it’s catching up to me. We have a good team and I still have some wins left in me.

“They don’t come as often and as easy as they used to, but they don’t come easy for anyone else either. If you can win five or six races around here during a year, that’s pretty good. The cars here are fast, Brett (Kressley) is fast, (Ryan) Krachun has a real fast car. Everyone has a Bicknell car, everyone has a Morgantini motor, everyone has the same American Racer Tires, and everyone has the same stuff. It’s kind of like IROC racing a little bit so you have to think outside the box. I think we are gaining on it, but we still have some work to do but I think we are going in the right direction.”

Doug Hendricks keeps it rolling in the Open Sportsman division

As the summer heat is upon us, one driver in the U.S.S. Achey Open Sportsman has started to heat up as well. Doug Hendricks has taken command of the Open Sportsman division and is putting some distance between himself and the rest of the competitors in the race for the 2021 points title.

Hendricks won last Friday night for the second week in a row in dominating fashion. Hendricks took the lead early on and just decimated the field to take the big win in the Andrew Fayash Memorial race.

“This car is really hooked up right now,” said a happy Hendricks standing outside his trailer. “We went to that left-side panhard bar last week which we have never ran before and it seems like it is working. We had to do something with the way the tracks been drying out. With the Sportsman running their feature towards the end of night, the track usually gets like that. Right now, it’s hooked up and with tonight being a redraw race and me starting third, that definitely helped. We’ll take it, we could bring the same set-up back next week and not be able to do anything. There is a lot of luck in racing, and we seem to be getting our share of it right now.”

Hendricks who has been labeled “Hang Ten Hendricks” for his proximity to letting it all hangout on the outside has found the fast way around the track running the top of the track.

“Even before we did this left side stuff, I tended to run up top,” explained Hendricks. “It seems like most of the Sportsman guys like to stay on the bottom, so you have to be able to try and do something different to pass people. With this left side set-up it seems like you don’t have to drive the car in as hard, but it still works. So, the past few weeks, I have changed the way I have been driving the past few years and it’s working out for us right now. Racing is about having confidence and with the way we are going right now, we have that. Everybody who helps me is happy and we are getting the work done in the shop and that’s what wins you races, being prepared.”