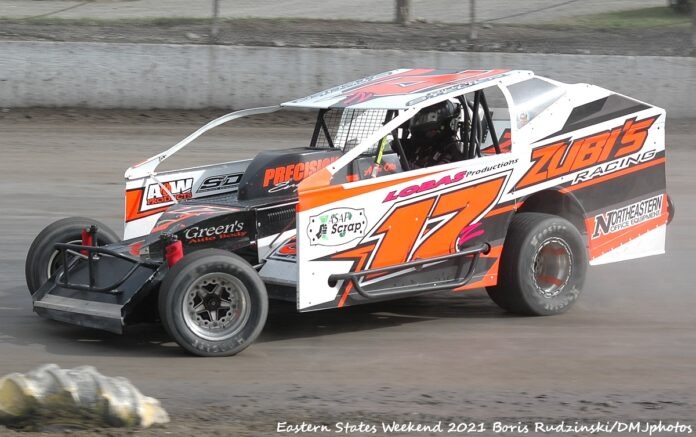 Starting 14th on the grid in the Eastern States 100 small-block race, Dillon Steuer wasted no time in getting to the top five passing some of the best Modified drivers in the Northeast. Using the extreme outside lane, Steuer was making moves as the crowd watched the young driver march towards the front.

However, contact with another car on his way to the front found the left front tire going down on the Zubi’s Racing No. 17Z. Steuer continued but during a lap 44 caution, the tire rolled off the bead forcing Steuer to head to the pits for a tire change.

“We got off to a quick start tonight and I think we were up to fourth,” said the happy Steuer after the race. “On my way towards the front we got clipped on the left front on probably lap six or so. I hung onto it as long as I could, but it finally came off the bead. After that happened, I had to come in and get a new one. It was a good night for us, but it just sucks we had to start all over again.”

Starting at the rear of the field, Steuer had 50 laps to make up what he had gained, and he didn’t waste any time. Staying up on the high-side, Steuer made his way towards the front only to be slowed by the numerous cautions and wasted laps under yellow that impeded his progress.

“We were really good up top,” explained Steuer. “Ironically, what made me run up there was the fact that I had the left front flat. With the flat I couldn’t really run the bottom because I had to keep the left front tire off the ground and the only way to do that was hammer down up top. So by having to do that, I figured out that was where I had to run the rest of the race.”

I asked Steuer if in hindsight would it have been better for him to come in and change the tire when it first went down instead of when it came off the bead to give him more time to recover.

“It’s hard to say,” cited Steuer. “If I did come in early, I might not have gotten that caution when it came off the bead. I was sort of hoping it would hold up and not come off the bead at all because it didn’t really affect the way I was racing. Who knows, maybe it would have, but if it didn’t come off I might’ve have been able to get to the front.”

A caution on lap 83 saw Steuer positioned in the 10th.  When the race was back under green Steuer went from 10th to fifth in six laps passing the cars of Peter Britten, Billy Decker, Mike Mahaney, Larry Wight, Tyler Jashembowski and Tyler Boniface. Unfortunately, by that time the top four had separated themselves from the rest of the field and Steuer did everything he could to catch up, and without the benefit of another caution, ended up in fifth.

“I needed one more caution there at the end,” mentioned Steuer. “I was reeling in Perrego and Williamson there towards the end. I don’t know, I think we might have been able get past both of them and even Sheppard to finish second. It was just unfortunate that we had to start all over after the flat. We had such a good race car tonight and the track fit my driving style.”

Steuer has always taken a liking to the Orange County Fiar Speedway and has showed speed there all season long no matter if he’s wheeling a big-block or a small-block. Only some untimely mechanical breakdowns and on track incidents have prevented the young driver from visiting victory lane.

‘It is definitely my best track for sure,” said Steuer. “For some reason we have this track figured out, and like I said before, it just suits my driving style. We have a decent set-up for here and always seem to run good no matter what the track conditions are. We’ll see what happens tomorrow in the 200, hopefully the track is like this and hope for a little rain like we had today. We have a good car for tomorrow, we are still trying to tune the big block up a little more. We’ll see how the weather is and hopefully we can make the right changes during the race so we can be there at the end.”

Editor’s Note: Steuer did indeed have a good car in Sunday’s 200 and was able to come home with a solid seventh-place finish in the Eastern States 200 making for a good all-around weekend for the Zubi’s Racing No. 17z team.