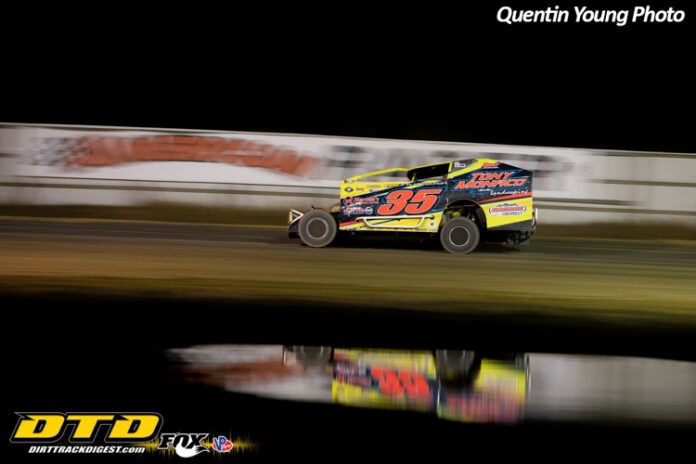 When Mike Mahaney took over the controls of the George Huttig owned No. 35 in 2019, he knew it would be a building process to get the team to the level he needed to compete weekly with the Matt Sheppard’s and Stewart Friesen’s in the world of the Northeast Modifieds.

In 2020, Mahaney took a step towards that when the team won the Albany-Saratoga championship. The turning point however was in October during the SDS Oktoberfast when Mahaney was a threat to win every night. Although the team wasn’t able to get to victory lane, the competition knew they were there every night as they rolled to top five finishes nightly.

Fast forward to 2021.  Mahaney and the Huttig team continued their ascension towards the top. It was clear that the driver originally out of Kings Ferry, N.Y., was ready to take it to the next level. The team was fast right out of the box and continued to be near the top as the season progressed. Mahaney was at or near the top in all three touring series the team competed in. A decision to skip the Super DIRTcar Series ace at the Land of Legends Speedway in September in order to compete in the Fonda 200 ended any hopes of a top finish in that series, but Mahaney still continued to lead the way in both of the STSS regions.

Despite the success of the team, Mahaney still was looking for his first wins in both the SDS and the STSS. As close as he has been, wins in both of those series have eluded him. In late September, Mahaney finally accomplished one of his dreams as he won the SDS race Albany-Saratoga Speedway holding off both Friesen and Sheppard for the win. It was a celebration for the ages as Mahaney hoisted the trophy and $13,000 check in victory lane. About a month later at the Port Royal Speedway, Mahaney was able to check another box off his bucket list as he roared to victory in the Thursday portion of the Speed Showcase 200 weekend by winning the STSS 40 lap feature event over Mat Williamson. There was only one thing left after that.


“We work really hard and to accomplish what we did this year is awesome,” said Mahaney. “We accomplished the three things we really wanted to do. We’ve built this team up from when I got here, I think this is our third year together and it’s paying dividends finally. Going into next year we have a lot of momentum. We have a lot of great equipment and great people working on it, and to have that, means a lot to me. We had our first series wins in both the SDS and the STSS, then to get out first title. I really don’t know what to say.”

Mahaney and his team was in a difficult position coming into the night. Should they go all out and try to win the race or play it conservative and concentrate on winning the title.

“Tonight wasn’t our night, but we did what we had to do to get the championship,” said a happy and relieved Mahaney celebrating with his crew back at the team’s hauler afterwards. “I am really proud of my whole team and the championship comes from how we ran all season long and not just one night. Coming into tonight, we knew where we had to finish and kind of finished halfway decent. Not too good, but we kept it together.  I was probably a little over cautious, but in the end, it paid off and we are STSS South Series champions.

“In the end that sounds weird because I am not a south guy,” explained Mahaney. “We don’t get to these tracks as much as we like, but fortunately Adirondack Auto and the Huttig family have given me the opportunity to come down here more often and it has really paid off. We’ve had a great season running the South Series and it means a lot to that they have the confidence in me to get the job done and tonight we did that.”

Winning the season long STSS South Series title is a big accomplishment and it was hard for the team to race the way the did, but it all paid off in the end.

“I am still not sure how to take this because we didn’t really run that well tonight,” mentioned Mahaney. “But, on the other hand, if I had been running really good and put my car in danger and then broke, it would be the opposite and I might not be here talking to you right now. I know sometimes being cautious doesn’t pay off, but tonight it did. We were able to finish where we needed to and it makes me so happy for my team, my sponsors, my crew and my family.”

“There are just so many great competitors out here tonight and in both the STSS North and South Series,” said Mahaney. “The South Series seems to have a different atmosphere. Different style tracks and different style racers and it is a learning experience coming down here to race. When I raced for the Brietensteins and got my first win at Grandview, that was a learning experience. It’s tough to race down here, guys are more aggressive. I didn’t race aggressive tonight, but we had to on other nights to be in the position we were in tonight to win the title. It was a tough track tonight with all the rain they got yesterday, but we did our maintenance and the car held together.”

Mahaney, like most championship drivers, has a style of driving that likes to get to the front quickly and lead as many laps as possible. It is an aggressive, clean style of driving and one Mahaney likes to be known for. However, tonight Mahaney was forced to take a different approach to the race.

“A night like tonight was uncharacteristic for our car and team,” cited Mahaney. “We can’t call it a bad night because we did what we had to do to win the title. We knew what our goal was, and I didn’t really come into tonight thinking we had to win the race. I knew we had to finish no more that 10 spot behind Matt Sheppard and don’t finish more that 15 spots behind Anthony Perrego and we knew that was the deal. I didn’t think it would’ve been this hard and as close as it was. I mean, halfway through the race we weren’t going to win it. I was able to get some more spots, able to keep my nose clean and not have any damage on the car. It’s a difficult thing knowing you have to race but knowing you can’t afford to break anything.”

As most people know who follow modified racing, the Huttig Racing team is based in Elizabethtown, N.Y. which is in northern New York. It involves a lot of travel for the team to make these southern shows, but the team made every South Series race, and in the end, they were crowned champions.

“I really can’t explain how it feels just yet to win the title,” explained Mahaney. “I guess it will all sink in at the banquet.  We will have a lot of fun there. It was a lot of travel to run this series.  It was so many hours to get to some of these tracks and we could’ve have easily said that one is too far and not go, but we didn’t and it paid off.”