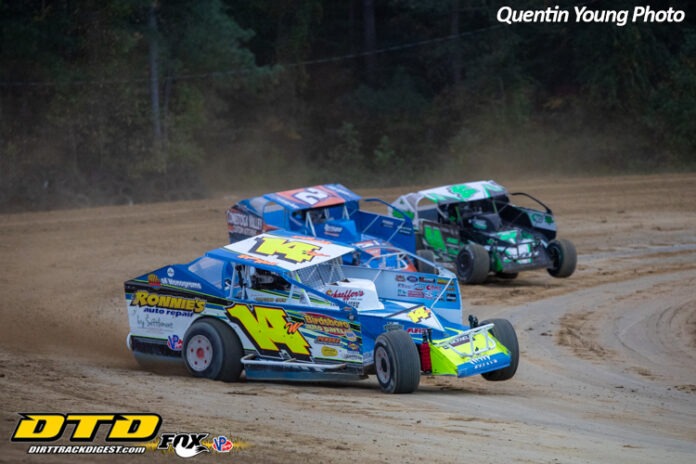 To say that Billy Pauch Jr., and the Rick Holsten No. 96 team have found the perfect combination for racing at the Georgetown Speedway would be an understatement. Pauch has won a total of nine times at the Delaware oval including a string of five consecutive wins this season alone.

On the final night in the Mid-Atlantic Championship race for the STSS South Series, the race was once again dominated by Pauch as he held off a strong Anthony Perrego and Ryan Watt for the win. Starting from the third position, Pauch took the lead on a lap four restart from Mark Pettyjohn. Perrego was also on the move early and when Pauch bobbled after a lap six restart, Perrego was able to take over the top spot.

A lap 22 restart saw Perrego back on top, but entering turn one the right front of Perrego’s car pushed up the track allowing Pauch to retake the lead with Perrego falling to third as Watt also was able to get underneath the No. 44. This time Pauch was clearly in charge and was not going to be denied. Watt got close, but was never able to make a move for the lead as Pauch raced off to the win.

“This track just seems to suit our style and the way we race,” said a happy Pauch sipping on a cold adult beverage in the trailer. “Last time we were here, the track was black and slick. Tonight, it was completely different then it was before. The car was a little too tight, but once I got rolling I knew I had a pretty good car. Anthony was good early on, and when he got by me, I wasn’t sure I could get him back. Then he pushed up on that one restart and I was able take advantage of it to get him back.


“I knew once I was able to get back by Anthony, I knew I was good. I waited and waited to see what I had and what I could roll with and after that I was able to maneuver the car like I wanted to. I was able to get a good launch off of (turn) two at that point. This car has been good here each time, and to win five in a row, is quite an accomplishment for the team.”

Georgetown Speedway has always been good to Pauch and on this night it was no different.

“I have always been good here and I feel like Georgetown has been a good track for me over the years,” explained Pauch. “I have always felt like I could get around here well. I have always been a rhythm guy who likes to float the car type of driver and I always struggle on what you would call toss tracks. This track here you can get a rhythm going, you can keep your RPM’s up, and get rolling.  It seems to work really well for me.

“I’ll be honest with you, last week at Delaware I was happy I was able to finally get a win there. That track has always been my Achilles heel when you have to toss the car sideways, but last week, I could roll the car well and that’s something my dad preached to me early on. I think that is why I am so good here; New Egypt is the same way as I can usually just roll the car through turns.”

You can see the difference in Pauch’s driving as he starts to travel a little more and get away from the tracks he has run for many years.

“It took me years to figure out just who I was,” explained Pauch. “Once I figured that out, I was just going to be me.  We really started to take off and we were able to take it to the next level. We have been good just about everywhere we’ve gone this year and have won at about five or six different tracks this year. Charlotte will be a different animal and we’ll see what we can do there.”

As I have written before, Pauch and Rick Holsten have clicked on and off the track and it is a combination that seems to get better with time.

“I’ll tell you something, and I’ll preach this to anyone in this business, you can run for a multi-million-dollar operations, but if you don’t have chemistry it does you no good,” said Pauch. “Chemistry wins you races. It’s the chemistry in the pits and the chemistry with your people. Rick and I have different personalities, but we get along well and it works. It’s been an interesting year altogether and we’ve pooled a lot or resources to make it even better. Rick is the glue that holds it altogether. It takes a lot of people to make this all work for both teams. If you look at both of our teams, the cars are all filled up with sponsors and that’s what makes it to. This sport isn’t getting any cheaper. We are family teams; we don’t have any full-time guys that just work on race cars but we have a lot of grit and determination.”

Pauch currently sits fourth in terms of features won in Modifieds with 14 wins. That is a career high for the Frenchtown, N.J., driver. More importantly, the three drivers ahead of Pauch in the number of races won Stewart Friesen, Matt Sheppard and Mat Williamson are all full-time drivers which is something not lost on Pauch.

“It’s been a good year, pretty unbelievable when you think about it,” mentioned Pauch. “This has been our best year for sure. The only drivers who have won more are full-time guys and that is the way it goes. I have a good job and am not quitting it to become a full-time racer. I like the way it’s going and maybe we can get one or two more before the end of the year.”

It has been quite a season for Pauch. No matter if it is in his own No. 15 or the Holsten No. 96, Pauch has been up front and winning races.

“It’s been a good two months here,” stated Pauch. “We had one mulligan in the Port Royal 200 and we know what happened there that caused us not run as good as we would have liked, but if you take one bad race in the past few months, I am okay with that. I really don’t want to see the season end, but in reality, I do want to see it end.”

With 2021 season winding down, Pauch still has some traveling to do as he packs up his own No. 15 team to head to the World Finals down in Charlotte, N.C.

“We leave on Tuesday for Charlotte,” mentioned Pauch. “Then back to Bridgeport on Sunday with Joel’s team, the week after that we will head to BAPS. I was going to race my own car at BAPS, but since Ricky (Holsten) had the No. 96 spec car all ready for here last night and it rained out, we will run his car there. Then it will Bridgeport for the SpeedStr race and that will be it for the year. I hope Ricky and I can keep this momentum going now and into next year.”

Racing at Georgetown Speedway has always felt like home for Ryan Watt. With his car owner Ron Roberts based out of Delaware, Watt enjoys traveling south to race and has found a lot of success. Saturday night, Watt added to his list of career accomplishments by winning the 2021 Georgetown Speedway track championship.

Watt started the race in the eleventh spot and quickly worked his way towards the front. Running his usual outside lane, Watt worked his way up to third, and when leader Anthony Perrego pushed up in turn one on a restart, Watt was able to take away the second spot behind leader Pauch. Watt challenged Pauch for the lead, but ultimately started to let Pauch get away. Perrego was able to make a late race pass of Watt to retake second away with Watt finishing third.  That was more than enough for Watt to claim the track title.

“It was a good run for us tonight,” said a happy Watt as he was getting ready to watch his son Logan race in the Crate Sportsman division. “The track had a lot of character tonight; they did the best they could do with all the rain yesterday. I think that roller they had really helped with the track.  If they didn’t have that the track would have been brutal.

“It was interesting out there. Our car was way too tight to run the bottom so I just had to make the outside work and it started coming around for us.”

Winning the championship was the culmination of a good season the No. 14W team had at Georgetown.

“We did have a pretty good year down here, “explained Watt. “There were a couple of races I wish we could have been a little better, but most of the races here we finished in the top five. We did get one win.  We certainly would’ve liked to have had more, but that’s the way it goes. Overall, it was a good year here at Georgetown.

“We have a lot of good fans down here in Delaware who follow us all over, especially at Delmar and here at Georgetown. With our car owners Ronnie (Roberts) and Fay (Lancaster) being from down here, we get a lot of local support and to win a championship down here is great for everyone. It’s a pretty good deal for an eight or nine race series.”

With that being said, the season is over for the No. 14W team as they now set their sights on 2022.