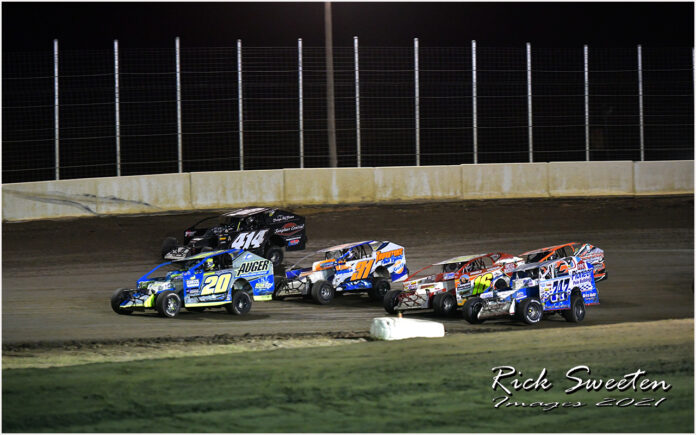 When Doug Rose took ownership of the former Bridgeport Speedway a little over two years ago, one of his goals was to make it one of the premier race tracks, not only in the Northeast, but in the country. To do so Rose had to bring in some of the best divisions in the country. After only two seasons, Rose has done just that.

After the tracks first season in 2020 which was rudely interrupted by COVID thus forcing many of the traveling series to cancel events and shorten their seasons, Bridgeport Motorsports Park came alive in 2021 with a wide variety of racing series visiting the wide high banked 4/10’s mile speedway for the first time.

In 2021 alone, Bridgeport Motorsports Park hosted the Super DIRTcar Series, the Short Track Super Series, the USAC 410 Sprints, the World of Outlaws, the USAC Midgets, the United Racing Club, the MASS 305 Sprints, a major Street Stock race along with some of the best and most exciting modified and crate racing in the northeast.

“To set yourself apart and to grow I feel diversity is very important,” explained Rose. “Yes, race tracks have their divisional identities, but fans still want to see everything, and we provide just about everything. There has not been much of a Sprint Car identity in New Jersey, and we plan to bring that here. MASS, URC, and of course the 410’s all put on great racing, especially on the high banks of the Kingdom of Speed.”

2022 is shaping up to be more of the same with some of the best traveling series in the country making stops at the South Jersey dirt oval. The Super DIRTcar Series returns to Bridgeport on Tuesday May 3rd, the first two visits from the SDS have produced some of the best modified racing seen at Bridgeport with Stewart Friesen and Tim Fuller finding victory lane. The Brett Deyo Short Track Super Series makes its second Bridgeport appearance on the newly designed track Tuesday July 26th. Sticking with the modifieds, other big races on the schedule include the 2022 season opener with the running of the “Kingdom of Speed 100” the weekend of March 26th & 27th. The third running of the “Danny Serrano 100” will take place the weekend of September 24th and 25th. The season will conclude the weekend of November 5th and 6th with the running of the High Banks Classic. The Crate 602 sportsman division will also be running on most of these special events and their season includes multiple $2,000 to win shows including a $4,000 to win race as part of the Danny Serrano weekend. Also scheduled for the Crate 602 class will be the third annual “Precision Hydraulic & Oil” invitational on Saturday September 24th and a $2,000 to win race as part of the High Banks Classic weekend.

Multi-time track champion Ryan Watt who picked up his first win on the newly designed track last season in the running of the STSS race offered his thoughts regarding Bridgeport Motorsports Park and what Doug has done.

“Doug (Rose) has everything going right at Bridgeport,” said Watt. “He has a facility that is friendly to fans and friendly to sponsors. The track is good for kids and with the races being on FloRacing it gets your sponsors out there more and gets them nationwide. For your sponsors, maybe a crew member or a family member who cannot make the race it gives them a chance to watch you race. It’s tough to go against with everything Bridgeport has to offer. The track has good paying races for the modifieds and the crates, plus there is virtually every kind of series coming there which is what the fans want to see.”

A big show is planned for Sunday July 3rd highlighted by a 40-lap $10,000 to win race for the Modifieds. The Super Late Models will make their Bridgeport debut the same day running a 40-lap feature. The show will also include the SpeedSTR division with their own 40-lap race.

If you are an open wheel fan, Bridgeport Motorsports Park is where you want to be as they will host multiple series throughout 2022. The “Invasion of the Posse” returns on Tuesday April 19th setting the table for the return of the ever-popular World of Outlaw Sprint Cars on Tuesday May 17th. The mighty 410-winged warriors return on Thursday August 25th when the All-Star Circuit of Champions make their first ever appearance at Bridgeport. Staying with the winged theme, the URC Sprints are scheduled for three appearances in 2022 including both opening and closing weekends at the track. The MASS 305 sprints will also make multiple visits during the season.

Don’t fret if you are a wingless sprint fan as they will be well represented in 2022 highlighted by the annual visit of the USAC 410 Wingless sprints as part of the “Eastern Storm”. This is a show that is always looked forward to by the fans. The fast-growing USAC East Coast Wingless sprints will bring their brand of racing to South Jersey making four visits to the track in 2022.

The open wheel class will be highlighted on the weekend of October 28 through 30 when the BMP presents “Sprintoberfest”. That weekend will feature the 410-Winged Sprints racing for a $5,000 first place prize. The URC Sprints and the USAC East Coast Wingless will also be part of that weekend. All three feature races will be 40 laps in length.

Bridgeport Motorsports Park will also host the kid popular Monster Truck Throwdown twice in 2022 along with a return of the Kenny Wallace Racing School. The Street Stock Nationals will also run again on the weekend of October 7th & 8th.