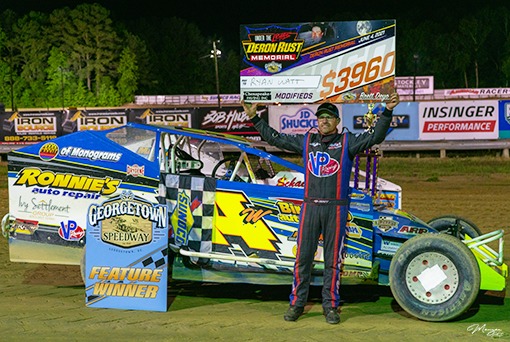 the 2021 season was not quite the year Ryan Watt has hoped, the Boyertown, Pa., driver managed a couple of wins and a Georgetown track championship, but all-in-all it was not a typical Ryan Watt season. Bad luck could be attributed to some of it along with being in the wrong place at the wrong time on occasion.

However, there was a huge bright spot in 2021 as Watt’s son Logan started his big car career last season.  He had a phenomenal year in his last full year in quarter midget racing. The young Watt was crowned USAC national champion in one class and finished in the top five nationally in his other classes. Logan was also able to take home his first career victory in the Crate 602 Sportsman division at the Big Diamond Speedway where he finished in the top 10 in every race that he competed in at the Schuylkill County dirt oval.

With a new car and a new paint scheme set to be debuted at the upcoming Pioneer Pole Buildings Motorsports Racecar and Trade show on January 21st and 22nd. Watt is excited and ready to get the new season started. The team once again will have an aggressive schedule as it looks forward to what is ahead.

“With the announcement of the new Brett Deyo “Elite Series” we will definitely making the trip to Cherokee Speedway,” said Watt. “I am looking forward to a new track to run this year and going for some big purses. So that will be our first race and Logan will be going along to race in the crates as well.”

Once the race in Cherokee is in the books, it will be full speed ahead for the Ron Roberts’ No. 14W race team.

“After Cherokee we plan on hitting all of the Elite series races,” cited Watt. “We will also be running all of the Short Track Super Series South series races. All of that will be run in the Ron Roberts’ owned car.”

Last season, Watt didn’t commit to running a weekly track due to son Logan’s quarter midget schedule, but this year the team will returning to familiar grounds.

“Right now, it looks like we will be running at Bridgeport on a weekly basis, also in the Ron Roberts’ car,” explained Watt. “Doug (Rose) has everything going right at Bridgeport. He has a facility that is friendly to fans and friendly to sponsors. The track is good for kids and with the races being on FloRacing it gets your sponsors out there more and gets them nationwide. For your sponsors, maybe a crew member or a family member who cannot make the race it gives them a chance to watch you race. It’s tough to go against with everything Bridgeport has to offer. The track has good paying races for the Modifieds and the crates plus there is virtually every kind of series coming there which is what the fans want to see.”

Watt will also be adding Big Diamond to his weekly racing in 2022, albeit in a different car in which we all saw a glimpse of last season.

“Our plan was to take Logan to Big Diamond on Friday nights like we did last year,” mentioned Watt. “We will try to run every week except for the nights we will miss to race Georgetown. I ran Shawn’s No. T102 for a race last year and we had a good time that night and they offered it to me for this year.

“I had no intentions of racing the Ron Roberts No. 14W there just because it is too much work with all of the midweek races, running Bridgeport weekly and plus working on Logan’s car just makes it too much for us to do. So, Shawn said to me if you are going to be here and want to run my car, let’s do it. It never hurts to run more races and get more laps under your belt, so I said why not. We will be parking side-by-side there and working together.

“My crew will help with Shawn’s car, and it should be a good deal for everyone. Shawn has good equipment, and we will be running Penske’s on his car along with the same spring package that I am used to racing with. All-in-all, it will help them out and as I said it will help me out as well with getting more laps behind the wheel. I am really excited about racing with Shawn and hopefully, we can have a good season.”

If anyone knows Ryan Watt, they know that he has always preferred to race big-blocks and in 2022, Watt will try to get to some of those shows as well.

“We will race the SDS race at Bridgeport, Big Diamond and if everything goes okay at Big Diamond, we might try to race the SDS at Bloomsburg. We still plan on running our big-block in any race held at Georgetown and Delaware International.”

Equipment wise the team is ready to go racing.

“We are good to go right now,” explained Watt. “We have two of our big-blocks back from getting freshened up. Our spec head motors were in pretty good shape from where we left off last year, so we have two of them ready to go. The cars are coming along well, we are in pretty good shape to start the year out and are excited to get the year going and see where it goes.”

This will also be a big year for Logan Watt as he embarks on his first full season of racing a Crate 602 Sportsman after last season when the quarter midget schedule was the priority.

“We still have two quarter midgets that Logan can race when he wants to,” cited Watt. But we are not following any series, points, or any weekly stuff this year. If he wants to race one when there is nothing else going on he can but this year he will concentrate on racing his crate car. Logan will be back this season driving “Stitch”. Logan never really tore it up last year, so we just went over everything and put some new sheet metal on it, so it looks good for Motorsports.”

It will be busy year for smooth driving thirteen-year-old driver who impressed many last season.

“Logan will be running full-time this season at Big Diamond, except for maybe the couple of Georgetown races that run on Friday nights,” said Watt. “I haven’t seen Big Diamond’s full schedule yet so I don’t know what will interfere yet. If I am right, there is only two nights between April and September that Georgetown will be racing on Friday nights that might conflict with Big Diamond. Maybe, if we get lucky the night,s that conflict the crates or Modifieds will be off at Big Diamond. Logan will also race in the STSS South Crate 602 series full-time except for the race at Bridgeport where he is still not old enough to race.”

All the No. 14W team sponsors return from last year as well as a couple of new sponsors for Logan’s team that the team will be showcased at the upcoming Motorsports show.

Both father and sons’ cars will be part of the Bob Hilbert Sportswear booth next week at Motorsports so stop by and see the Watt’s and catch a glimpse of the new car and paint scheme on the No. 14W