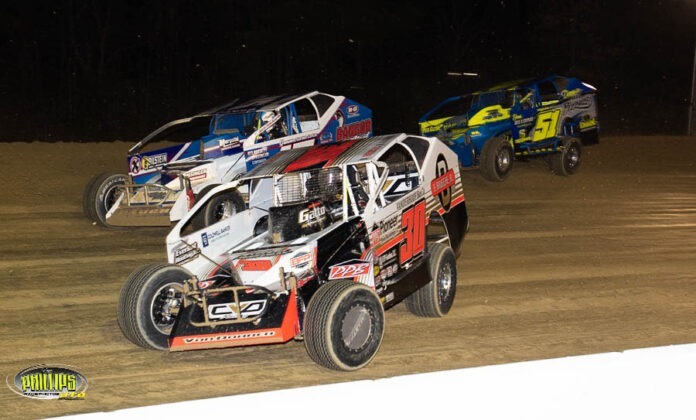 If there was ever a way to start your season off, Craig Von Dohren certainly found it. The 58-year-old veteran modified wheelman showed that the veterans can still get it done as he out dueled Billy Pauch Jr., during the midway portion of the race and then raced to a convincing victory in the Melvin Joseph Memorial small-block race pocketing a winner’s share of $4,049.

Friday night’s win was the third small-block win at Georgetown Speedway for Von Dohren and his ninth overall at the speedway.

“We had a really good car tonight,” said a happy Von Dohren after the race. “We drew up front for the heat race and it went nonstop so we really didn’t know what we had for the feature. It didn’t really feel good early, just not comfortable. I don’t know if it was waiting for the fuel load to burn off or for the track to get skimmed off. But once it came in, it was a totally different race car. Glad to get the $4,049 to open the season with. I have always run good here and it still haunts me the one I let getaway from me a few years ago just trying too hard.”

Driving the Bruce Bueche owned No. 30 Bicknell, Von Dohren started the 30-lap race in the sixth position and despite dropping a couple spots was up into the top five as lap five was completed. The key to the race was a lap 16 restart where Von Dohren was able to go from fourth to second and then able to set his sights on then leader Pauch Jr.

“I thought I was just going to try and lay low for a little bit,” explained Von Dohren. “I was thinking of building a little gap there and then run the top because I didn’t want to go down there, bobble and fall back to eighth or somewhere. Then I saw the No. 126 (Dominick Buffalino) cut down to the bottom and then the run was there for me on the top so I thought I would try it. If he would’ve stayed up there, I probably would have just followed  him, but he cut down and I went for it. The car stuck and I was able to get past both cars in front of me and into second.”

Once into second, Von Dohren set his sights on leader Pauch Jr who had won the five previous STSS features at Georgetown. Von Dohren charged the outside as Pauch held his line down low and the pair ran side by side for a few laps before Von Dohren was able to make it stick up high and get by Pauch for the lead.

“Billy (Pauch Jr) has been really good down here and I was finally able to work my way by him on the outside,” mentioned Von Dohren. “Obviously Billy broke a few laps later and I am not sure what happened there, but it sure feels good to get that first win off of your chest this early in the season.”

Von Dohren’s win came in the team’s travel car and outlined what the Oley, PA driver has outlined for the 2022 season amid concerns of parts and tires going forward.

“This is our Bridgeport travel car for races here and other tracks,” cited Von Dohren. “This is the only engine we have at the present time. We sent all of our motors back after last season to be refreshed and as of right now this is the only engine we have in the shop. We used this engine last year and it did not have a lot of races on it so we didn’t send this one back. This is really going to be a tough summer for racing. A lot of guys have hurt motors already and they can’t get them fixed, parts are tough to come by also.

“Hopefully we get our engines back soon. We are still waiting on our Grandview stuff and our Big Diamond stuff. We broke our big block motor last October at U.S. 13 (Delaware International) and our still waiting for parts to get that fixed. It’s funny, years ago we had parts but not enough money and now with these guys (The Bueches) we have money but can’t get parts so that’s frustrating right now. But that is the same for everyone not just us as we are all experiencing it right now. Tires are going to be tough to get during the summer plus the price of fuel right now, I just hope it doesn’t affect racing to much. We won’t be able to go to Selinsgrove or Port Royal next weekend because like I said this is the only motor we have and you cannot run a spec engine at those two tracks and expect to win.”

“I am 58 years old now and it seems to be coming and going with my back,” explained Von Dohren. “Over the winter I had a little debacle for about a week or two and I was wondering what the hell did I do, as it just started to hurt. That kind of went away and I have been doing a little bit of exercising again and trying to stay in better shape. I sure can’t do what I did back when I was 28, that’s for sure. I do still wear the back brace when I race just in case. I don’t really know if I need to or not, but I don’t want something to happen and then say what the hell, I should have had the brace on.”

After a very disappointing visit to Cherokee Speedway for the STSS Elite event, which saw Richie Pratt Jr and the No. No. 51 Danny’s Pizza Pizzaz team head home after Thursday night’s practice after damaging their motor, the team was ready to right the ship.

Friday night saw Pratt start in the 12th spot in the feature and come home with a very impressive second place finish in the 30-lap small-block main event.

“This was a lot better than down south, that’s for sure,” said a happy Pratt in victory lane. “At least this time we actually got to race. I am just grateful for another opportunity with this team and hopefully this is start of a good season to come.

“We had a good car tonight, starting twelfth certainly didn’t help. But if this car runs like this all of the time, we should have a lot of good finishes. Von Dohren was just a little bit better than us on the outside there at the end of the race. I could go out there on the restarts but couldn’t stay out their lap after lap like he could. Overall, it was a good run for us, and we’ll take a second tonight.”

Perrego Finishes Third in Maiden Run with the Salerno 4* Modified

One of the big stories over the winter was the teaming up of Anthony Perrego and the iconic No. 4* Modified of Vinny Salerno. The team is scheduled to race in the Super DIRTcar series together and at the time also said it would race in some 358 spec races when the time allowed. Well, the team’s first race together ended up taking place Friday at Georgetown in the 358 small block race.

Perrego ran in the top five most of the night and when the checkered flag flew at the end of 30-laps the Montgomery, N.Y., driver found himself on the podium in third place. Not a bad run for the team inaugural race.

“Not a bad way to start I guess,” said Perrego in victory lane. “I thought we were good there, we raced with little Pauch (Billy Pauch Jr) there then we started to get a little tight there when the track started to blow off a little bit. Craig (Von Dohren) and Richie (Pratt) could just roll the track a little bit better than we could on the outside as I was trying to fight the middle.”

As the race wore on, the outside was the place to be on restarts and Perrego was able to take advantage of that late to get to third.

“It definitely was, early on the top was just a little bit too slimy,” explained Perrego. “Early on I was able to start on the bottom and make some moves there but as the race went on, the top was the spot to be on the restarts. All in all, this was a good way to start the season off with Vinny.