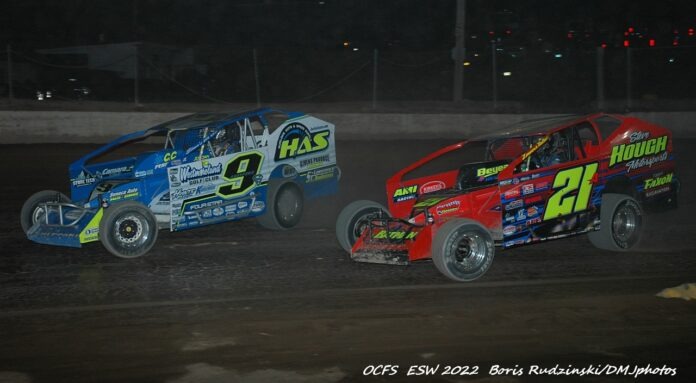 It hasn’t been the greatest weekend here at the Orange County Fair Speedway for Peter Britten. The driver out of Australia was running well in Friday night’s STSS Hard Clay Finale until a part broke in the driveline that forced him to pull off of the track.

Britten redeemed himself in a big way yesterday and thrilled the crowd at the same time as he went from third to first to on the second to last lap to win the 100-lap small block race as part of Eastern States weekend.

“Wow, what a race! Our weekend didn’t start out well when we broke a rear end last night while we were running good,” said a very happy Britten after all the victory lane ceremonies were complete. “We had a strong car tonight. I guess it sounds really easy when you start on the pole and win the race but not quite.

“You know going into the race, I wanted to be realistic and just be there at the end. We had the lead for a long time and I started thinking I could do it and I just made a mistake in lapped traffic and Matt (Sheppard) got by and I am sure he was hounding me for a long time and obviously he is the best so if you give just one opportunity he is going to take it and at that point I guess I would’ve been happy enough to finish second to him and call it a good race. Then I slipped up again in lapped traffic and Marc (Johnson) got by me and then I was aggravated in losing spots.”

Lapped traffic taketh away and lapped traffic giveth. Britten stayed with the two leaders as the laps were winding down. Not one to be content and finish third, Britten stayed in the gas and as Sheppard and Johnson drifted a little off the bottom in turns three and four Britten saw the opening in front of him and went for it. Britten stuck it in there, bouncing off the inner jersey barrier Britten kept his foot in the gas and emerged out of the turn leading the way, Johnson gave it one last shot up high but to no avail as Britten scored the very popular win.

“To be honest with you, I don’t really know what happened there at the end,” explained Britten. “I saw that Marc (Johnson) must’ve missed the bottom there, it was tough there with the lapped traffic and I think he got a little sideways and I just got enough traction to get underneath him so I could get the line and then all of a sudden, I am under Sheppard and then it all just kind of opened up for me. I feel like I have the worst luck of anybody but tonight I feel like we got one back.”

Britten went on to talk about how the lapped cars played into the whole race.

“I bet the lapped cars made it interesting for the fans,” commented Britten. “It was tough, actually through the first 75 laps of the race you could actually get around the lapped cars because you could use the top in turns one and two there. But towards the end of the race, that started to go away. I was behind (Jimmy) Horton and Sheppard was in front of me and I was man, he is stuck and then when I got by Horton, I thought to myself I just might have a shot here and then I messed up and Marc (Johnson) got by me and then at that point I am just trying to regain my composure and then boom, it all happened.”

For Britten, it was a big victory not only for him, but for his entire team. Britten had a big win in the small-block race at Super DIRT Week a few years ago and winning today was great for the team to get another high-profile win.

“Obviously, the two big weekends of the year are Eastern States and Super DIRT Week,” mentioned Britten. “The Super Dirt week win was special but this one is wicked too and they both ended up being great races too. Apparently, I don’t like to win these races in a dull fashion. We are a relatively a low budget team compared to some of the others we race against, but they give me what I need. There are so many people that pitch into this deal, it is not a one person show that foots the bill as there are a lot of people involved and I cannot thank all of them enough. It doesn’t matter if it is someone who buys a $200 tire or someone who pays for a motor rebuild. They are all important and it feels so good for them to get rewarded for all of their hard work to make this deal work.”

Unfortunately for Britten, he will have to temper his celebration as the schedule for Sunday’s Eastern States 200 has been moved up an hour in an effort to get ahead of the forecasted rain.

“Yeah, why did they have to do that,” said Britten? “Obviously we are going to enjoy this tonight. You have to enjoy times like this tonight because they don’t come along very often and especially with the crop of drivers I race with. We will enjoy ourselves tonight but obviously we know we have a job to do tomorrow and hopefully this win will spur us on tomorrow and give me some more confidence and who knows. We have a good big-block car for tomorrow so maybe we can pull off the double.”