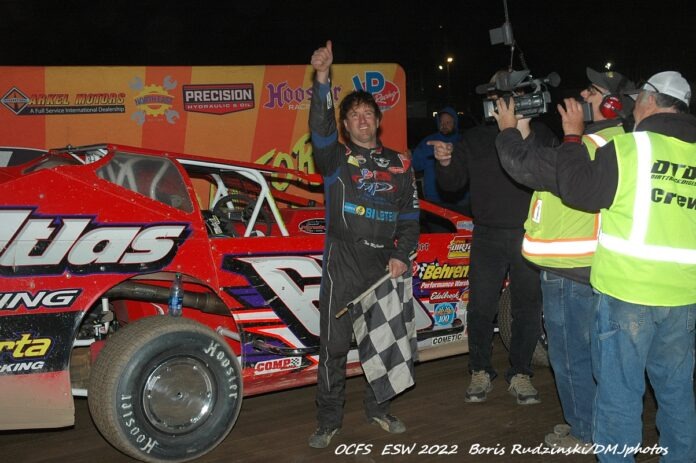 As Tim McCreadie came off of turn four coming to the checkered flag in Friday nights Past Champions race, he wasn’t sure if he was going to win the race over Jimmy Horton as the two former Eastern States 200 winners battled side by side over the last five laps of the 15-lap race. McCreadie down low, Horton up on the high side. McCreadie would get the advantage coming off the turns but Horton using his momentum up top would streak back by the 2022 Lucas Oil Late Model champion to surge back ahead. But on the last lap of the last turn McCreadie said he got some help to complete the pass and take the win.

“I didn’t even know I was even coming to the checkered flag until I saw him waving both checkered flags,” said McCreadie. “I thought the race was more laps and didn’t know they had cut the laps down to 15. He was getting back by me every lap coming down the front stretch and somehow on that last lap, Jared must have pulled the front bumper down the straightaway for me to get the win.”

McCreadie was referring to Jared Petruska, who was the crew chief on the family-owned Atlas Paving No. 66. Jared was the lifeblood of the team which was owned by his father Mike along with his brothers Michael and Eric. Jared tragically lost his life in a work accident back in the spring of 2020. After Jared’s passing, the race team was shut down for the 2020 season and only raced once in 2021 which was at Eastern States weekend with Tim McCreadie. This season the team did race once at Brewerton and after that the cars sat until this weekend at Orange County Fair Speedway.

To say it was an emotional win Friday night would be an understatement.

“Getting this win for the Petruska’s is just awesome,” explained McCreadie. “After Jared passed away in that accident, they didn’t know if they would even do this again. I talked to Eric about what they wanted to do and we came here last year and you could tell that this wasn’t easy for them to do. This is what they have always done, their whole family. From all three brothers to their father, this is what kept them together.

“Now when we try to do more, it’s hard because we don’t always know where we need to be. I don’t run these cars hardly at all and Eric does a great job, but it’s hard, so we probably haven’t been as competitive as we should be but Friday night was really cool. To see the look on Mike’s face and the family and how happy they were just made it all worthwhile. It’s never going to be easy I can imagine but for one night it made them all very happy. Mike, the father, is a very emotional person so to see the smile on his face last night was priceless.”

Speaking with Jared’s brother Eric Petruska, he told me how much the win meant to him and his family.

“This win meant everything,” said an emotional Eric. “For my brother Jared who passed away, it was exciting and very emotional. My dad felt relieved that we got the win, and I cannot say enough about our driver (Tim McCreadie). He’s an amazing person, a great guy and we all come from the same kind of families and last night we just made it happen. It was a lot of time and effort to get these cars ready and it’s really hard when you only race twice a year.

The crowd recognized the scope of what was going on last night and with McCreadie being a very popular driver when he returns to his modified roots, the family noticed that.

“Yes, that was cool. I was talking to one of our spotters and he told me the crowd was standing up and cheering,” explained Eric. “Some of that I am sure was the race itself being so good with Timmy and Jimmy (Horton) racing side by side, but I am sure some of it that for us in getting the win. The win meant a lot and sort of validates what we are doing to keep Jared’s legacy going. It was definitely a special night for our family.”