With ten laps to go in yesterday’s Eastern States 200, it looked like the it was finally going to happen. Could it be that Super Matt Sheppard would be shut out for the weekend? That scenario hasn’t happened since the weekend of September 9th through 11th. Since that weekend, Sheppard has been on the streak of a lifetime winning at an amazing clip along with winning all four of the Modified crown jewel races including yesterday’s Eastern States 200.

Still with ten laps remaining yesterday, Stewart Friesen looked like he was about to end Matt’s streak. Friesen was working his way through lapped traffic like a surgeon keeping Sheppard a safe distance behind him. Then it happened, Friesen smacked the inside wall with his left front tire while trying to go under a lapped car resulting in the tire to go flat. You can still drive a modified with a left front tire but on a track like Orange County, it definitely hinders the handling of the car going through the turns. Sheppard being the driver he is saw his opportunity and pounced. Quickly closing the gap on the Friesen’s Halmar No. 44, Sheppard made the winning pass with six laps remaining going on to win the $40,000 first place prize. Sheppard himself never saw that coming and had resigned himself to finishing second.

“In my wildest years, I couldn’t imagine winning two of these crown jewel races let alone four of them,” said Sheppard in disbelief. “This is unbelievable, I just don’t know what to say. Last week I didn’t think we had a shot and tonight I didn’t think we had anything for him. He (Friesen) was dam good, I think clean air was king and being out front was good. I think if any of us in the top four was out front it would’ve been tough to pass but it always boils down to traffic. Traffic bit us the past two nights and it helped us to a win tonight, so I guess it has its way of evening things out.”

Sheppard’s car with about 40 lap fresher tires seemed to be a little faster than Friesen towards the end but he just could not catch a break with the lapped cars to mount a challenge until Friesen flattened his left front tire.

Sheppard was the only car to change tires on the first pit after lap 30 which the rules stated that you could only add fuel at that point without suffering a penalty with the penalty being going to the end of the line. Even with that rule, the No. 9S team kept with their strategy.

“It was our strategy to change tires. We knew it was a double-edged sword because we knew if we changed tires we would have to go tail,” explained Sheppard. “We didn’t think we would lose as much track position as we did and to be honest with you, I don’t know if the new even helped us at all or not. But just like anything else this fall, it all worked out in the end. We did pass a lot of really good cars to get from the back to the front. We just tried to stay steady and not panic. Keep my eyes open and try to stay out of trouble. We did have a couple of close calls there on the front stretch with Tremont and all in all the car looks pretty much unscathed. Things just keep going our way right now. It’s been a helluva a year, that’s for sure.” 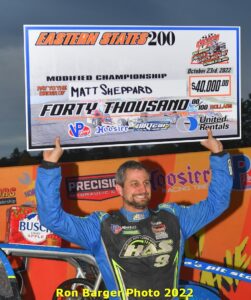