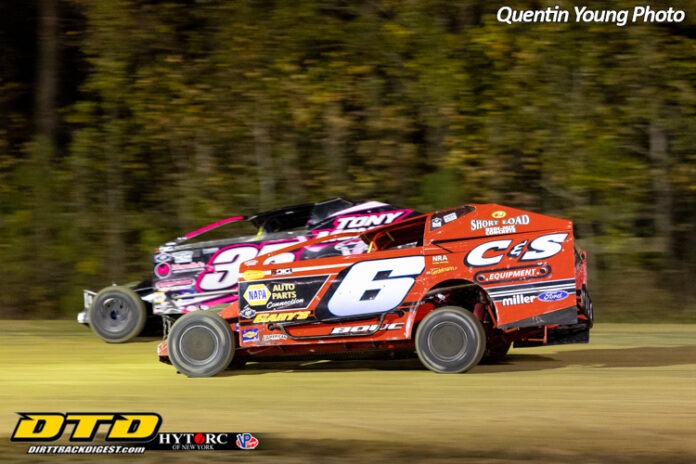 GEORGETOWN, DE – It was a talent laden field of modifieds Thursday night at Georgetown Speedway for the 50th running of the Camp Barnes Benefit race. After 30 laps of action, it was Danny Bouc standing in victory lane winning his first ever race at Georgetown Speedway. It was also Bouc’s second big race win in a row after having won the Legends of the Fall race last Saturday at New Egypt Speedway.

“Winning this race is a big relief,” said Bouc reflecting on his win in his trailer. “We have been trying for a long time and most have ended badly. It’s finally good to have one end really good. Hopefully we can ride the wave on this one.”

It was also the first win for Bouc driving the Craig and Leslie Pondish No. 6.

“We honestly have had a really tough go of it for years,” commented Bouc. “We have shown a lot of speed but probably had maybe the worst luck anyone could have had. I was starting to think maybe it was that this car is cursed or something. But I cannot thank them enough, they’ve stuck behind through some really bad luck, and I have made some mistakes driving like spinning out at Bridgeport a few years ago while leading but they are great people and I love driving for them.”

Most fans see the teams at the track and that is that, but some do not know how much time and effort they all put in at the shop during the week. Living close to Bouc, I try to stop by his shop every now and then, so I know firsthand what Bouc puts into his race teams.

“This makes it worth it and this is why I work so hard during the week,” explained Bouc. “I know I am not the greatest driver of all time, but I know I can do it and I know I can win races. I usually try to outwork everyone to make up for it. When we make a mistake at the track or make a bad call, I hope to have everything prepared as it can possibly be. I worked late both nights leading up to here getting both cars ready after Port Royal and after New Egypt, I was in the shop until probably 12:30 to 1:00 AM every night. My fiancé puts up with a lot of s**t, I am never home and that’s a tough thing for a girl to put up with and that’s major she understands and allows me to do this.”

Starting second, Bouc took the lead from polesitter Matt Stangle on lap two and never looked back but it was not as easy as it seemed as things got interesting at the end when Bouc felt pressure from Stangle and Jeff Strunk.

“I was pushing hard but not as hard as I could have, I knew I had a good car there in the beginning,” Bouc mentioned. “I knew when I got to the lapped cars, I had to slow my pace up because I didn’t want to race them guys and get in a battle with one of them and get in a battle so I was just riding and hoping the laps would play out so I wouldn’t get passed there at the end. I was trying to close up my entries to the corners towards the end there because I figured somebody was coming and they were, but it worked out.”

The last five laps got very interesting for Bouc. Stangle had caught the No. 6 and started to work the inside of Bouc in turns one and two. Stangle drifted high with two to go allowing Strunk to get to second and make a bid for the lead on the last lap, but Bouc was able to hold off both challenges.

“I could hear those guys under me, and I knew they were there, and I knew I was slowing my pace up enough for them to get to me,” said Bouc. “I adjusted my line a little, so they didn’t try to pull a slider on me. I was having trouble keeping my momentum up there on the top with those lapped cars staying up there all over the place. I played it right I guess.”

Like I mentioned before, this was Bouc’s second big win in a row and with only a couple races left on his schedule, it is a good way to end the season.

“I told everyone all year how pissed off I was at New Egypt,” commented Bouc. “Our car was bad fast and we should’ve won ten races there this year. That’s how fast our cars are. I told everybody that maybe we missed all those small wins and were saving it up for a couple of big ones at the end of the year. These big wins for a little team like us are major. These wins will power me into next year and hopefully we can use the money to freshen up some of our equipment and come back stronger next year. This car is three years old now and has been wrecked bad a few times but it’s a great car for me and takes a beating and keeps on going.”

For Jeff Strunk, it has been a while since he has had a good run here at Georgetown Speedway. Strunk driving the Glenn Hyneman No. 126 big block last night was fast all night in winning his heat and coming home a strong second in the feature.

“Coming from eighth tonight, I wasn’t sure what to expect with the track being so fast,” said Strunk. “It was hard to pass but harder to pass and it was a good run for us. The car was good, I could maneuver it around and was able to pass some good cars and get to second. We have a good car for the weekend, we brought the big block tonight and it definitely paid off.”

Strunk ran third for most of the race but was able to get under Stangle with two laps to go and make a last lap bid for the win but ultimately coming up a little short.

“Our car seemed to maintain the whole race and those guys kind of fell back to us,” explained Strunk. “We picked the right tire for tonight and made all of the right choices. I just screwed up in one and two on the last lap or I think we had a helluva shot at winning. I thought I could get him coming off of turn two but I hit a corn row down there. Every other time I caught I made time but that time I didn’t and caught it with the left rear and lost the nose. Then we lost about four car lengths, if I would’ve got off two better I think I could’ve gotten alongside of him and made a run for the lead coming off of four. I thought we were definitely better than him there. Hopefully, we are saving the win for Saturday night and the $25,000.”

Stangle on the podium

Matt Stangle started the 30-lap feature event on the pole and led lap one before Bouc went past him on the outside for the lead. Stangle never let Bouc get out of sight and in the closing laps made a bid for the top spot ultimately finishing in third place.

“This car was good, in the beginning the top looked black and I didn’t think it would be fast and lap later Danny blew my doors off on the outside,” explained Stangle. “On the long green flag runs, out car was very good, and the race came to us and at the end I was able to get to him but he just had the momentum coming off the turns to keep me behind”

Stangle kept working the inside on Bouc and when the leader moved down to block Stangle’s advances it forced Stangle to try the outside and that is when he lost second place.

“I got under Danny in turns one and two and going into turn three he went to the bottom to block me,” explained Stangle. “So, I figured I would just go to the top and try that and in doing that Jeff was able to get by me.”

Rick Laubach blew the motor in the Gary Herrman No. 7 during the heat race ending his night. Laubach will be back with his own No. 20 for tonight’s small block race then will head home…

Anthony Perrego was very fast in his heat race until the No. 44 slowed to a stop. The culprit was a broken lower shaft in the rear end. The crew along with some help from Matt Sheppard was able to make repairs in time for Perrego to race the last chance race and qualify…

Speaking of Sheppard, it was odd to not see Matt up front in the 30-lap feature and ending up finishing in the 7th spot…

Stewart Friesen struggled in his heat race resulting in a DNQ. Friesen did qualify through the last chance race finishing the feature in the 12th…