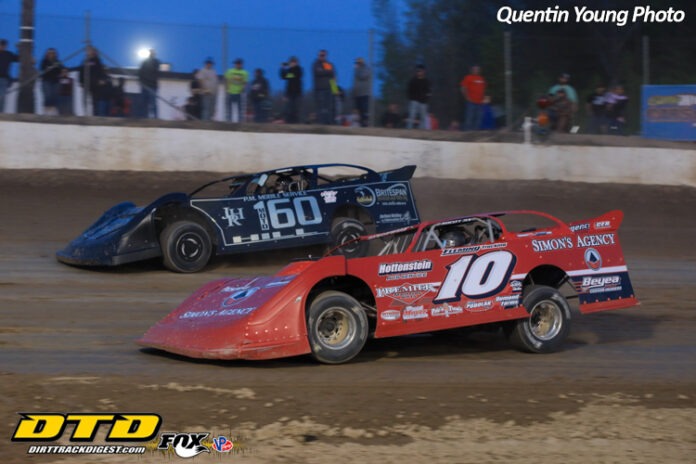 Chris Fleming opened the night with his first win of the 2021 season in the Billy Whittaker Cars and Trux RUSH Late Model class. Chad Homan was second with Max Hill third.
The Tracey Road Equipment 358 DIRTcar Modifeds at Fulton put on a great show in their 35 lap feature event at Fulton.

Joe Shields sat on the pole and led in the early laps until Nick Krause took the lead using the topside of turns one and two. Tully native Ben Bushaw took the lead away from Nick Kraus on a restart and used the topside of the high banks to lead from that point into lap 33 when Tim Sears Jr. raced past Bushaw to take the lead and his third consecutive win in three events at the Fulton speedplant.

Mike Root led the first DOT Sportsman division feature to the green flag. A melee in turn one involving several cars restacked the field for another restart. Jeff Prentice grabbed the lead on lap two with Jimmy Moyer trailing after starting in sixth position. Matt Janczuk got by Moyer and started to pressure Prentice for the lead by lap 10. On lap 13 Janczuk grabbed the lead by shifting lanes to the top exiting turn four. On lap 20 Prentice and Moyer got collected by the lapped car of Backus as she got out of shape in turn two and the second and third place cars had no escape route. With Janczuk in clean air on the restart his laps got faster and his lead widened as Wade Christman and Tyler Corcoran battled for the second spot. Christman finished a half car length ahead of Corcoran. Janczuk won the first of two DOT Foods Sportsman features.

Josh Amodio led the second DOT Sportsman feature to the green flag with Mike Phelps outside his right side window. The start was waved off and Amodio was sent back two spots for jumping the gun before the start barrel. Phelps led the first lap from the pole position he inherited. The man on the move was Chris Mackey who moved into second place on lap 19. A late race caution on lap 20 for Rick Miller and Amy Holland, who locked bumpers in the back stretch, bunched up the field erasing the lead Phelps was enjoying. Phelps help off the hard charging Mackey as they finshed bumper to bumper. Josh Amodio raced his way to third.

The final feature event on the card was the E&V Energy Novice Sportsman division. Brett Sears took the lead from Buddy Leathley on lap two in the Sears Contracting 83 machine. Sears cruised to what looked like an easy win from that point on.

I was home before 11PM to the credit of the entire staff for running a tight show. Sunday I met with a family to plan a memorial service for a family that provides sweet treats at local race tracks. Tiffany Chatigny of Candy Land passed suddenly on May 13th and will be celebrated at Bush’s Funeral home in Elbridge NY on Monday May 24th, with calling hours from 5-7 PM. I will be speaking at the celebration of her life to close the calling hours.

Today, Sunday May 23rd was Pentecost Day. This was a history changing event in history when God manifested His personal presence to 120 faithfully obedient disciples of Jesus Christ in the upper room Jesus had recently served the Passover Seder on the night He was betrayed and arrested. It was these people that God empowered to establish His Ecclessia upon the earth, thereby continuing the work Jesus began of establishing His Kingdom upon the earth.

On that day, in response to citizens from every adjoining nation who were confused by the commotion God was creating in the lives of those 120 believers, Peter stood up and preached a powerful message from the writings of the Prophet Joel. The result was over 3000 men were added to the church in response to Peter’s message. Acts 2 reports the account of these things, with Acts 2:14-36 recording the very message Peter preached.
In response to his message the people could only ask one thing.

“Now when they heard this, they were cut to the heart, and said to Peter and the rest of the apostles, “Men and brethren, what shall we do?” Acts 2:37 NKJV”

Cut to the heart by the word of God spoken in the power of the Holy Spirit, they could only ask “what shall we do?”

Peter immediately answered them, both with instructions of repentance, and a promise of much greater things in the Holy Spirit.

“Then Peter said to them, “Repent, and let every one of you be baptized in the name of Jesus Christ for the remission of sins; and you shall receive the gift of the Holy Spirit. For the promise is to you and to your children, and to all who are afar off, as many as the Lord our God will call.” Acts 2:38‭-‬39 NKJV”

I personally get excited when I see a believer filled with the Holy Spirit as the 120 were on Pentecost, with the evidence of speaking in tongues. It’s a biblical promise that fulfills a prophecy of Jesus Christ when He said “And these signs will follow those who believe: In My name they will cast out demons; they will speak with new tongues; Mark 16:17 NKJV”

I pray you have a fantastic week enriched by this short teaching. I believe the closer you draw to God the nearer He comes to you. How close do you want to be? Reach out in faith and He will pull you into Himself.

If you need anything reach out at flchaplain@windstream.net