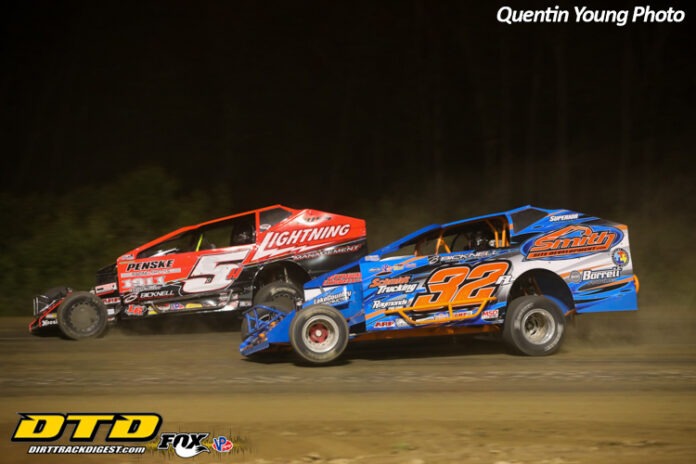 After a couple great nights at Brewerton and Fulton last weekend I got thinking about some unusual things that took place that stuck with my thoughts.

Heavy rains on Thursday and soaked the area pretty well, but the track crew at Brewerton had the track in excellent shape by the 7:30p.m. start time. A little intermission tweaking kept it that way throughout the features. One of those oddities that stuck with me was Billy Decker’s mechanical failure that sidelined him early in the Tracey Road Equipment Modified feature. I didn’t hear what it was, but for the LJL Gypsum team that’s not a common thing.

Ronnie Davis III and Chris Hile put on a great show once they took the top two spots. A late race slider by Hile in turns one and two to take the lead was short lived as Davis came right back in turns three and four to regain the lead with his own slider on Hile. In the mean time, Larry Wight was working through traffic to eventually make a late race pass on Hile to secure second place.

Another unusual thing I couldn’t forget was the two Sportsman drivers that started way back in the pack with each gaining the same number of positions on the slickened up track. Zach Sobotka, by virtue of finishing ahead of Alan Fink, earned the hard charger award for his charge from fourteenth to fourth place. Rich Townsend set the pace and grabbed his first 2021 win, with Dale Caswell Jr. finishing second and JJ Courcy third.

Saturday was overall a great night, with every division’s feature starting Indianapolis 500 style, three wide. To be honest, I expected a lot more issues than there were with 3 wide racing off turn two in heavy traffic.

Ronnie Davis III was able to capture another win on the weekend. Larry Wight suffered a right rear flat after gaining 0.3 to 0.5 seconds per lap to close the gap on Davis after he had a mid-race flat tire incident. Wight pitted and returned to finish 12th. Another unusual, but unavoidable setback for the LJL Gypsum team. Dave Marcuccilli had a strong second place finish, with Pat Ward working to his best finish of 2021 coming in third. Mike Maresca made a rare appearance at the high banks, starting near the rear and rallying all the way to fourth place. Look at the official press releases for a more detailed account of the events. I wanted to point out a few highlights and oddities that sought my attention over the weekend.

How we handle unusual, unexpected, or unwanted circumstances is a clear indication of our emotional and spiritual maturity. All of us were tested severely last year and in the first 3 months of this year with countless events and circumstances beyond our control, but in a more controlled environment we can really show our true colors by our reactions, or responses, when things go other than planned.

A first century pastor, known as James, offers us an unusual perspective to aspire to. Before I share his perspective, let me share a little more about him. James pastored the first church in Jerusalem following the ascension of Jesus Christ. He was a member of the Apostolic community personally selected, trained, empowered, and released to continue the ministry of Jesus Christ to establish His Kingdom on Earth. James was also the son of Joseph, making him Jesus’ brother. Scholars teach that his knees were so calloused from kneeling in prayer that his peers called him “camel knees.”

That much time spent in prayerful fellowship with the Holy Spirit evidently taught James something worth including in the canon of Scripture as eternal truth.

“My brethren, count it all joy when you fall into various trials, James 1:2 NKJV”

By calling out to his brethren, James was clearly addressing the church. He didn’t expect the unbelieving to have the capacity to adhere to this statement. The odd thing about this statement to “count it all joy” is hidden in the original language of the classical Greek this was transliterated from. To “count it” means to lead, be a leader, have authority over, and when applied to our mindset it means to consider, deem, account, or think.

James was telling us to consider what we face, take an account of how it affects us, think about it, and deem it an occasion to take authority over our emotions to be a leading example of the right response, which is joy. Let me explain further. Joy is not an emotion, it is a choice. We choose whether or not to be joyful. Circumstances have absolutely nothing to do with our response to them. Emotions indicate how we process them, but our willing choice of response indicates what level of spiritual maturity we have reached by governing over our emotions.

“Peace I leave with you, My peace I give to you; not as the world gives do I give to you. Let not your heart be troubled, neither let it be afraid. John 14:27 NKJV”

When someone gives you something it becomes your possession, so the joy of the Lord belongs to all who believe.

James’ purpose in calling believers to lead the way to a right response in joy no matter what happens was followed up with deeper purpose and reasoning.

“knowing that the testing of your faith produces patience. James 1:3 NKJV”

No doubt life can test us. When we remain in faith, knowing God’s promises are always “Yes” and “Amen” in Christ, to the glory of the Father, we can also abide in His joy in a way that matures patience in us. It’s easier to wait for a solution, or a promise, when the strength of joy is at work in you producing a deeper level of patience. James confirmed this by saying:

“But let patience have its perfect work, that you may be perfect and complete, lacking nothing. James 1:4 NKJV”.

The word perfect here can be accurately substituted with the term “fully mature”.

Racing can pose some serious stresses and challenges. I’ve personally been tested and failed while being a team owner and crew chief of our family race team over the years. It taught me many things, but this lesson from James to allow yourself to lead the way for others by remaining joyful when the bottom falls out from under you, is one of the most valuable lessons I, or anyone else in the sport could learn.

I look forward to seeing how this season plays out for certain teams, and for anyone else facing the testing of their faith by uncontrollable, unforeseen, or I wanted circumstances.

Reach out to us if we can help at flchaplain@windstream.net or message us through our Facebook page.