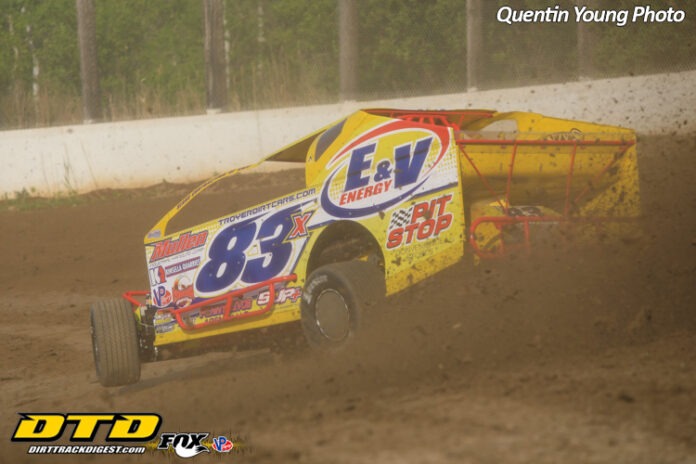 I spent three evenings at three different racetracks over the weekend and got to witness two first-time winners in their respective classes, determined drivers racing from the rear of the field two top five finishes or wins, and domination by a few champion caliber drivers.

I began my weekend at Brewerton Speedway where one of the main reasons I love dirt racing was made manifest between the Modified heats and feature. Larry Wight brought out a brand new car and got tangled up in a “pile in” style wreck in turn one during his heat. The entire right front steering and suspension was junked in the incident. I went pit-side during intermission to see a small army of people from at least five teams helping his team swap the front axle, spindle, radius rods, tie rod, shock, as crinkled sheet metal was hammered out. Larry made the feature, started near the rear and raced his way into second place.

Another winner was birthed at the D-Shaped Dirt Demon as Max Hill drove his Sportsman to his first career win while Zach Sobatka raced his way from mid-pack to a very solid second place. Jubilee would be an understated description of Max’s reaction to his hard earned accomplishment.

Saturday at Fulton, Tim Sears Jr. drove from near the rear of the field to win another 358 Modified feature.  Austin Germinio drove an impressive race to win the first Sportsman feature. The most convincing drive of the night was the entertaining march from the tail of the field to a strong third place finish by Tyler Corcoran. Matt Janczuk drove from mid-pack to win the second Sportsman feature.

Sunday, after church and lunch with my bride, I went to the Sportsman Classic at Weedsport. Another first time winner was crowned in the NY6A 600 Microsprint Tour as Logan Crisafulli led from the green to the checkered flag. Maybe being a Kart Champion at the Little Port helped, but the big track is a lot more to tame.

The 35-lap Modified feature was dominated by Mat Williamson in the Buzz Chew sponsored ride. “The Dr.” Danny Johnson relinquished the lead on the back stretch on an original restart after Tim Sears Jr. brought out the first caution of the race. Johnson finished second with Matt Sheppard finishing third.

The 75 lap DIRTcar Sportsman Classic was also dominated by another champion caliber driver, the young gun Zach Payne. Janczuk gave it everything he had but could not capitalize and had to settle for second place, with Nick Guererri finishing a strong third.

So many conversations and observations kind of melted together in my mind after experiencing so much racing over the weekend, but the elation of first time winners, dominant runs, and hard charging accomplishments always make for some hearty conversations with the guys that orchestrated them. I can’t share some of the things I was told because I didn’t ask permission, but next time I’ll remember to ask.

One of the things I’ve discovered this year, after not seeing so many teams in almost two years because of the pandemic induced lockdown, is how quickly people forget your appearance. I’ve had several people tell me they didn’t recognize me. Some, because they’ve never seen me with a beard, some, because I never wore prescription glasses, and some because of the “out of sight, out of mind” syndrome.

I wonder if that’s what Jesus experienced, or will experience when He comes back. I know there were doubters after His resurrection because the scriptures tell us so. Thomas, and the disciples that left the ministry to return to their fishing business with Peter, all either doubted He had risen or didn’t recognize Him when He showed up on the scene. Thomas was with the other disciples when Jesus appeared to them after he outright told the other disciples he wouldn’t believe unless he saw the physical evidence of the nail holes in His hands and the spear wound in His side.

“Now Thomas, called the Twin, one of the twelve, was not with them when Jesus came. The other disciples therefore said to him, “We have seen the Lord.” So he said to them, “Unless I see in His hands the print of the nails, and put my finger into the print of the nails, and put my hand into His side, I will not believe.” And after eight days His disciples were again inside, and Thomas with them. Jesus came, the doors being shut, and stood in the midst, and said, “Peace to you!” Then He said to Thomas, “Reach your finger here, and look at My hands; and reach your hand here, and put it into My side. Do not be unbelieving, but believing.” And Thomas answered and said to Him, “My Lord and my God!” John 20:24-28 NKJV”

How would you have responded if you were in Jesus’s shoes? One of the twelve men He invested three and a half years of His life and ministry into completely doubted what was prophesied about the resurrection of Christ from the grave. Even after at least 11 other eye witnesses had told him Jesus had risen Thomas stubbornly rejected their testimony seeking tangible physical evidence as proof.

Notice that after Jesus reappeared and called Thomas out that Thomas was driven to confess Jesus Christ as his Lord and his God? Listen to Jesus’s response to Thomas’s profession.

“Jesus said to him, “Thomas, because you have seen Me, you have believed. Blessed are those who have not seen and yet have believed.” John 20:29 NKJV”

Jesus was saying something simple, yet deeply profound. We’ve all heard the phrase “seeing is believing”. It was derived from Thomas’s response to Jesus’s appearance to him. We’ve all also heard the nick name “doubting Thomas”, also derived from this passage of scripture. What Jesus said to Thomas after he received the physical evidence that Jesus is alive and well could be accurately interpreted this way: “only believing because you have physical proof doesn’t please Me as much as receiving Me by faith based on what scriptures say about me, and by the testimony of those who are eye witnesses of my life.

“But without faith it is impossible to [walk with God and] please Him, for whoever comes [near] to God must [necessarily] believe that God exists and that He rewards those who [earnestly and diligently] seek Him. Hebrews11:6 AMP”

The author of Hebrews verified what Jesus said to Thomas. We must receive God, the Lord Jesus Christ as our savior, by faith. A few verses before this faith was described.

“Faith shows the reality of what we hope for; it is the evidence of things we cannot see. Hebrews 11:1 NLT”

In biblical Greek this can be accurately transliterated to say “unwavering trust in and reliance on God is based on the undeniable evidence of our expectation in Him, which is based on the solid foundation of His testimony (God’s Word), which produces the tangible substance of the manifestation of what He said.

Faith has substance that brings our future expectation placed on God  into our present life so we can trust Him to manifest it to us.

“Jesus answered and said to them, “This is the work of God, that you believe in Him whom He sent.” John 6:29 NKJV”

When we apply our faith in the death, burial, resurrection, asscention, and return of Jesus Christ as proof of our eternal redemption, our hope cannot be swayed. We are fully assured of our inheritance in His Kingdom. There’s no other way in. Jesus said this to Thomas just a few weeks earlier to prepare him for His death, burial, and resurrection because He sensed Thomas’s doubts then.

Would you know Him at His appearing? Would you recognize Him when He returns? More importantly, would He recognize faith in you? We all have to search our heart to find the honest and sincere answer to those questions. We’re always available. If you doubt yourself get in touch with us. Email us at flchaplain@windstream.net or message us on Facebook on our Finish Line Chaplain site.