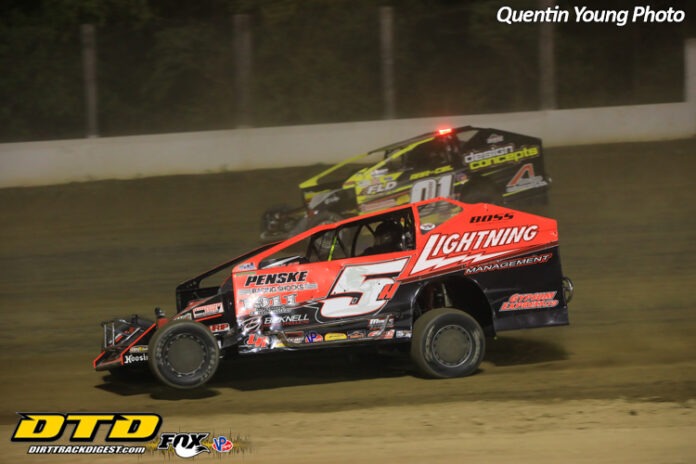 I have loved this season so far. Every time I show up at one of my regular tracks I end up have several “WOW” moments. Friday I was questioning the weather, but God gave us clear skies just in time for the unsung heroes known as the track crew time to put the finishing touches on the surface. Even though Brewerton started roughly a half hour late, the event ran off like clockwork, and the surface was the raciest I’ve seen in a long time, smooth with a ton of bite.

When the Sportsman break into the 14.9’s and the Modifieds hit 14.1’s you can count on a lot of action. Jeff Taylor broke the former track record on his way to win in his heat race turning a 14.105, topping the former time set by Matt Sheppard at 14.117 by 0.012 seconds. If you’re wondering how little a gap that is, blink. Chris Hile was the victor in the feature grabbing his first “W” at Brewerton for 2021.

JJ Courcy raced his way to the top spot for his first win in the Sportsman division in 2021. Clayton Brewer was the top dog in the Mod Lite class, and Chuck Powelczyk added to his resume of wins in the 4 Cylinder Stock class.

Saturday I was at Fulton Speedway enjoying the perfect weather early in the evening. Scott Kline was the winner in the Novice Sportman division, while Chad Homann added to his point lead in the Late Models class by winning another feature. Mile Phelps won his Sportsman feature with a very strong run, while Rookie Cody Manitta won his first Sportsman feature of 2021. The Modifieds ran seven laps until the caution was thrown for rain.

There seems to be a trend growing at Brewerton and Fulton where drivers starting at the rear race their way into a top five, or a winning position. Matt Janczuk did just that after getting caught up in a back stretch “pile in” type crash. Mike Button scraped the backstretch wall getting out of shape near the front of the field sending everyone behind and beside him scrambling to avoid him, some less successfully than others.

All I can say is wow! I didn’t expect to see any racing Friday but the crew at the ‘D-Shaped Dirt Demon’ made it happen and the show was amazingly action packed from start to finish. Saturday the crew at Fulton ran all the heats and features in an hour and forty five minutes. Then it rained. They tried, and no one that was their should have anything but good to say about the quality of the show. All I can say again is Wow! Great job to everyone who pulled this off at both tracks. That’s why I love the privilege of being the Chaplain at both of those tracks.

Wow can be an expression of awe, which is an experience that leaves a person with a sense of reverence that causes honor. When we see or experience God doing something amazing in us, for us, through us, or to us, we should never cease to be amazed and in awe of His majesty and power.

That awestruck wonder is the fear of the Lord. It’s the seed that spreads like wildfire when you praise God openly, publicly, not to be seen or draw attention to yourself, but simply to glorify God for what you’re led to praise Him for.

“God shall bless us, And all the ends of the earth shall fear Him.

Praise can be an open and instant response to blessings no matter where you are. A deal on something, a good report at the physician’s office, a good report from a friend or coworker, recognition for a project finished better than expected and ahead of schedule, the list could go on and on with reasons we can openly praise the Lord.

There is a higher form of praise that choses to offer up to God the glory due His name when the unction rises within you.

Recognizing the character attributes, personality, perfection, integrity, holiness, or anything else you love about God in a moment will lead you to praise God for being Himself. That’s the kind of praise that demonstrates the fear of the Lord, a reverence from someone so in awe of Him they can’t imagine doing anything outside of love for Him because they fear offending Him more than life itself.

I encourage you today to press ever deeper in praise until you see the Lord, high and lifted up, with the train of His robe filling the temple. Listen to the angels shout “Holy, Holy, Holy is the LORD God Almighty! The whole earth of full of His glory!” I promise you’ll enter in with the angels as a symphony of praise resonates off the walls of His throne room.

Have a blessed week that leads us into the weekend. We want to congratulate all of the graduates in the class of 2021. We’re proud to see you growing and going on with that accomplishment under your belt. The best is yet to come! As always, if you need anything you can reach us at flchaplain@windstream.net or on our Facebook page.