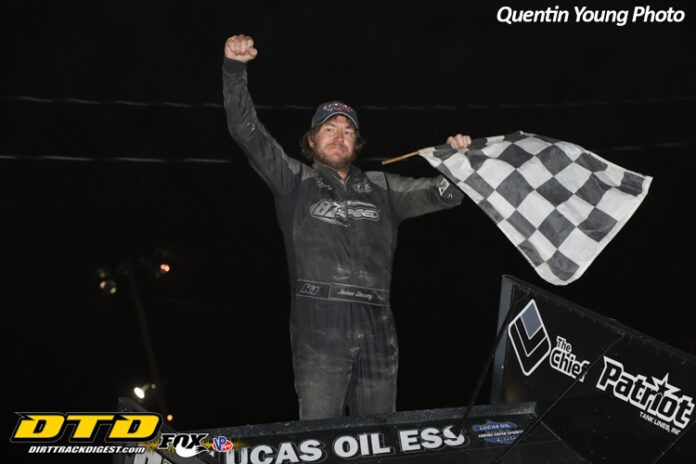 What a fantastic holiday weekend! It was a little cool at Brewerton, and a little rain pushed the start time back a little, but the “hammer down” tacky track gave the Lucas Oil Empire Super Sprints an opportunity to set blistering lap times. Quite a few drivers turned 12.7’s in hot laps and remained in the 13’s most of the night. Larry Wight reminded the tour drivers they were at his house by winning night two of four during the Central New York Speed Week.

Mike Maressca was able to race his way to victory lane in the Tracey Road Equipment Modified division. The DOT Foods Sportsman division is heating up competitively every week with several cars able to win, but it was Chris Mackey this weekend. Chris Bonoffski came out of 4 Cylinder Stock retirement to give Chuck Powelczyk a reason to work harder, and proved his former 113 ride could still beat the elusive Rabbit of Powelczyk.

I walked back to the hotel after the races taking in a few sights you wouldn’t normally enjoy just driving through the lakefront town. It was a refreshing way to wind down after a great night of racing.

Saturday my wife and I returned home from our little “anniversary long weekend outing” just in time to grab some lunch, grab a few things, gas up the truck, and head to Fulton for night three of the ESS Speedweek. As I did rounds in the pits, I was struck with a sense of deja vu seeing two drivers who cut their teeth on the high banks preparing to compete against each other just as they did years shortly after I began as a Finish Line Chaplain. Jason Barney and Sam Reakes IV both began competing at the Syracuse Quarter Midget club as children. Both moved up to the Sportsman ranks when they outgrew the little cars. Now both are solid contenders in the 360 Sprint ranks wherever they show up in the northeast. Jason capitalized on years of experience at Fulton Speedway to win the 25-lap caution free A-Main.

The first of two DOT Foods Sportsman features also went green to checkered with Willy Decker Jr. besting the field. Andrew Buff gave a convincing drive to win the second DOT Foods feature. Larry Wight capped off the night in the Tracey Road Equipment 358-Modified division by winning, after finishing 5th in his second appearance in a 360 Sprint Car over the weekend. The Novice Sportsman winner was Brett Sears.

Sunday, after leading two services, I ran home and unloaded our audio equipment, bought my wife lunch, took a nap, changed, and took off for Weedsport Speedway for the final night of ESS CNY Speedweek. A former competitor of my son dominated the NY6A 600 Microsprint Invitational 25-lap caution free A-Main. Jim Young is one of the founders of the US6A rulebook the NY6A tour governs by. He is also no stranger to victory hill at Weedsport. Jim designed and built his own chassis, and runs a potent Adams Performance powerplant.

The Modified portion of the event brought out two Sportsman shoes, plus a stout field of freshmen Modified drivers hoping to learn how to beat the established names. Tim Sears Jr., and Larry Wight made their way to the top two spots and put on a fantastic show racing each other for the lead. Sears had the better car and won his first Modified feature at “the Port” in the 2021 season in the caution free event.

The evening finale was the 25-lap Empire Super Sprint A-Main. Jonathan Preston and Chuck Hebing led the field to the green. After a melee in turn two took three cars out of competition, the field was restacked for an original restart. The Cobra took the lead on the first lap and began his march to victory hill, shaking a huge monkee off his back. His Can Am run concluded in seventh place. Brewerton was tough on the veteran who was unable to finish the A Main. Saturday Chuck began to show something driving the 45 car into a top five spot. Sunday the Cobra looked like himself, using every inch of race track to gain every advantage and open the gap of his lead on the field.

Jason Barney was crowned the 2021 Speak Week Champion. By consistently finishing in the top three and winning Saturday the local driver raced his way into the history books.

I don’t think I’ve witnessed so many features events running caution free in the 37 years I’ve followed dirt track racing. I want to congratulate all of the teams for their efforts, the drivers, the track prep crews, and everyone that created such consistently racy surfaces all weekend. It was an honor to serve you as Jesus Christ’s representative.

I had several great interactions over the weekend with people from every division and class competing. I watched some struggling early in the weekend make strong comebacks. I watched veterans take the rest of their fields to school as if to say “this is how it gets done.”  I also saw young guns standing out as if to say “there’s a new generation rising that won’t be denied.”

One of the things I hear a lot is how the transition between the 602 GM Crate Sportsman class and a 358 or big-block Modified is often challenging. Some drivers who seemed to struggle with the lower horse power cars are now much more consistent and comfortable with the high horsepower classes. Others struggle to harness that power and transfer it to the racetrack, which can be one of the most discouraging things a racer can face.

Discouragement is a battle fought in every life, and how we face trials quite often determines the outcome. If we lose heart we lose, period. If we push through we come out victoriously, even when the push is painfully hard or filled with resistance. This one little verse in the Apostle Peter’s first letter to the church carries a mouth full of truth and wisdom.

“In this you greatly rejoice, though now for a little while, if need be, you have been grieved by various trials,  1Peter 1:6 NKJV”

The source of rejoicing Peter is writing about is the eternal security salvation in Christ provides as a person repents from the mindsets and behaviors that are offensive to God. A person surrenders to the Lordship of Jesus Christ by personally receiving His grace. They do this by exercising faith in the power of His death, burial, and resurrection.

The next thing Peter said is a byproduct of knowing your eternal security, “though now for a little while, if need be, you have been grieved by various trials”. This text makes it clear that trials in life are temporary. Peter said various trials are for a little while. He also was inspired to reveal an option we have when we go through them. We can be grieved by them, as this verse states, “if need be”. What if you didn’t need to be? That’s what Holy Spirit is revealing through Peter. The next verse reveals the alternative mindset and response that leads you to victory over trials, tribulations, circumstances, and situations that create difficulties in your life.

“that the genuineness of your faith, being much more precious than gold that perishes, though it is tested by fire, may be found to praise, honor, and glory at the revelation of Jesus Christ, 1Peter 1:7 NKJV”

How do you view difficulties? Where does your mind go when fiery trials disrupt your life? Faith acts as if things that are not actually are. This kind of faith is a precious possession in the eyes of God. Do you see the circumstance as a dead end or a rough ride? Or, do you see God’s promise that supersedes the natural world?

Discouragement can be defined as a lack of courage or enthusiasm, which comes from three roots. The prefix “dis” means apart. Courage is the ability to do something that frightens you, or strength in the face of pain or grief. The suffix “ment” means an act of, a state of, or result of an action. With that in mind, discouragement is a lack of courage or enthusiasm to face a fear, or a lack of strength to deal with pain or grief resulting from some action, condition, or state of a person or thing you’re dealing with.

We have been given the choice to be grieved through discouragement (which usually stems from doubt in God’s ability, which is the same as saying lacking faith). We have also been given the choice to chose to praise God when we face insurmountable things. Praise is a language of the Kingdom of God that honors Him for keeping His promises even when we can’t see them with our natural eyes.

According to Peter, by inspiration of the Holy Spirit, when we receive a revelation of Jesus Christ and everything He provided and will provide for us, nothing should rattle us. We can chose greif, or we can chose praise. One is absent of faith, and the other speaks from unshakable faith. It takes time to grow into the knowledge of God enough to realize “all of God’s promises have been fulfilled in Christ with a resounding “Yes!” And through Christ, our “Amen” (which means “Yes”) ascends to God for his glory. 2 Corinthians 1:20 NLT”

Since faith is an unwavering trust built on the foundations of evidence God provides though His Word, and delivers by keeping His Word, we need to examine how genuine our faith is. One of the most obvious litmus tests is how we respond to “various trials” when we are “tested by fire”. The most precious and costly metals are refined more thoroughly in the crucible by fire. That should tell you God values you enough to refine you through fiery trials.

Have a blessed week. We look forward to seeing you. If anything comes up we can help with email us at flchaplain@windstream.net or message us on Facebook at Finish Line Chaplain.