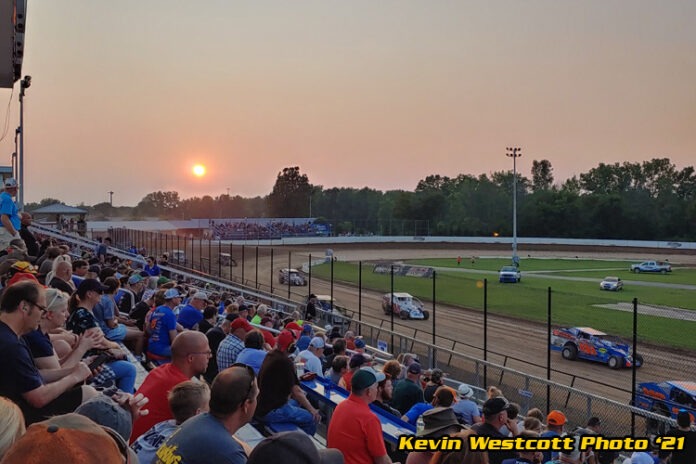 I don’t know about you, but I had an awesome weekend. From my Friday night gig at Brewerton Speedway, to Fulton Speedway on Saturday, and closing out the weekend at Weedsport Speedway.  What I lacked in sleep I made up for with ministry and good old down to earth conversation.

Friday we saw youth triumph over seasoned drivers as “Timmer,” Tim Sears Jr. parked his Tracey Road Equipment Modified in victory lane. Zach Sobatka, Mr. Consistent in the DOT Foods Sportsman, finally sealed the deal with a win, padding his points lead in the highly competitive division. As the night progressed Justin Williams parked his Americu Credit Union Mod-Lite in victory Lane, while his father Doug stood by the wayside celebrating with him. Damian Bechler raced his Dodge Neon to the front and took home his first winners purse.

Saturday, Ron Davis III was able to capitalize in the Tracey Road Equipment DIRTcar 358-Modified division. The first Dot Foods Sportsman feature fooled me for a moment as Austin Germinio checked so far out on the field that I was off on one place in my counts for position for everyone behind him. After taking the lead, Germinio won his second feature at the high banks this year. The second Sportsman feature was a little more about attrition, but eventually Chris Mackey found himself out front and first across the line. I do want to note that a rookie second generation Sportsman driver, Matt Richardson led 14 laps from the pole before losing the lead to Rocky Grosso on a restart. Grosso looked like he was cruising to victory before pulling his broken car into the infield on lap 21.

Tom “MacDaddy” Mackey made a late race run from third place to the front to win his first ever Americu Credit Union Mod-Lite feature at the famed speedway.

Chad Homan won the RUSH Late Model main-event while Chris Fleming, hot off a Friday night win at Freedom, threw everything he had to make up a wide gap between himself and Homan, running out of laps while finishing a strong second place.

Sunday at Weedsport the heat races in the Super DIRTcar Series Modified division ran off fast, with a heavy track and multiple grooves. The Sportsman heats started off with a bang as Steve Marshall’s front end washed out entering turn two giving Austin Germinio no where to go but up and over Marshall’s right front sending Germinio into the wall. Marshall was able to continue but Germinio’s car was damaged too much to finish the night.

The Guerreri brothers are always strong contenders at the Port, but both were eliminated by wrecks in their qualifying heats. Nick Guererri was racing out of turn four when contact by Cody Manitta sent Guererri into the wall nose first immediately past the flag stand causing a violent flip. All of the body work on the Guererri car was completely destroyed, as was most of the bolt on chassis components.

As a result of their wrecks, Germinio left the track to have his neck checked out, while Nick Guerreri was transported for treatment for a possible concussion. Keep both of these drivers in your prayers, because both have become proven winners and we want to see them back in the drivers seat as soon as they are able.

The big story from the Hall of Fame 100 Super DIRTcar Series Modified event was the birthday boy, Stewart Friesen, claiming the victory and a $10,000 paycheck. That had to feel like God was smiling down on him. Another observation I made was in the concentration of Brewerton Speedway regulars in the top 10. The “boys from the Brewhouse” are always strong competitors, blending youthful passion with veteran experience. Chris Hile set fast time for the evening, and finished the night in fifth place. Other drivers from Brewerton Speedway in the top ten were Tim Sears Jr, third; Billy Decker, seventh; Jimmy Phelps, eighth; and Larry Wight, ninth.

A trend I’ve noticed growing in popularity are the social media posts featuring a photo of race cars on the track with a sunset in the background. Sunday didn’t disappoint with that photo op either. I was able to take a few shots from the stairs to the announcers booth until I was satisfied with the right placement of the sun and racecars, and still capture the race fans.

When I see the beautiful vistas all around central New York race tracks I stand in awe of God and His creativity. When I look at the diversity of people that make up the teams, employees, and fan base at any given race track I see God’s handiwork, imagining Him seated on His throne patiently waiting for them to acknowledge Him and everything He created to reveal His love for us.

Some people I talk to think God is angry, or worse, that He is vindictive, because they’ve seen some hard times in their life. Neither of those perspectives are true. In fact, God is so in love with the human race He gave an unimaginable gift at an inconceivable cost to give us the opportunity to know Him on a close personal level. When you see the banners at sports arenas that say John 3:16, that’s what that verse and the one following it say.

The Contemporary English Version of the Bible transliterated it this way: “God loved the people of this world so much that he gave his only Son, so that everyone who has faith in him will have eternal life and never really die. God did not send his Son into the world to condemn its people. He sent him to save them! John 3:16-17 CEV”

After the Apostle Paul was imprisoned in Rome for false accusations made by the Jewish high council, he wrote a letter to the church in Ephesus to teach them deeper doctrine than they had initially received during the time He worked to establish them. He described what we all yearn for deep down inside, a way to assurance of our salvation, and God’s purpose of extending it to us.

“God saved you by his grace when you believed. And you can’t take credit for this; it is a gift from God. Salvation is not a reward for the good things we have done, so none of us can boast about it. For we are God’s masterpiece. He has created us anew in Christ Jesus, so we can do the good things he planned for us long ago. Ephesians 2:8-10 NLT”

He is not out to get you in a bad way, He is out to get you with the very best of His own intentions for you. God wants to reveal Himself to you, and bless you, so all of your life looks like victory. The Finish Line Chaplains are here for you as well, to prayerfully support you, and guide you into a blessed life so you can live your best life now. Look us up and we’ll hook you up with the source of every good and perfect gift, God, the Father of light, in whom there is no variation, or shadow of turning. He has never changed.

Have a blessed week and we’ll see you soon. We can be reached at flchaplain@windstream.net, or through messenger on our Facebook page at Finish Line Chaplain.