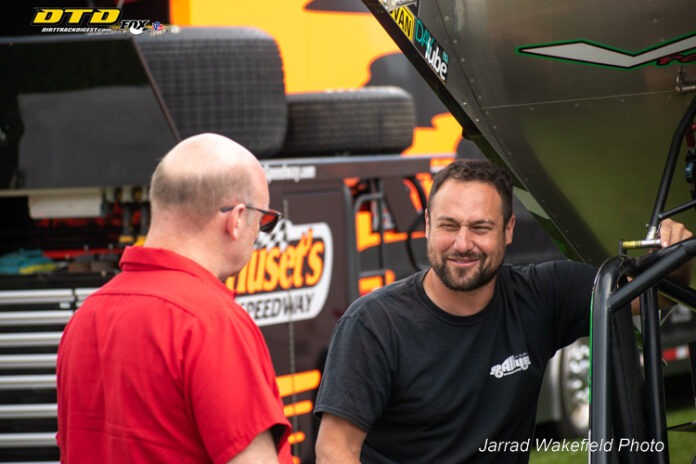 I want to start this column by giving a shout out to two drivers that my son competed against at some level in the past. When the Americu Credit Union Mod-Lites heats took to the track at Brewerton, Clayton Brewer, who has been a top contender in whatever he drives, started last. At the checkered flags he was first. The same thing happened in the DOT Foods Sportsman heat race that Zach Sobatka lined up in. He started in the last row and also won.

We have raced against Clayton, and received his help with parts when our night didn’t go so well at a race at Penn Can in the 600 Micro Sprint. We raced with Zach Sobatka for seven years in Quarter Midgets prior to our Micro Sprint stint. His team was always one to help out to keep us on the track and competitive. I can honestly say of both teams they are not intimidated by their competition because they thrive on it. Not only are they willing to help when things don’t go your way, but they were both helpful to us to gain speed and are always up to the challenge of anyone that runs up front.

Clayton Brewer raced his way into second place in his feature, while Zach Sobatka won from his 14th starting spot. Zach used the “no man’s land” line around the top to gain five spots in two laps, and by lap seven he was in third place. His strong run increased his point lead over Alan Fink.

The Tracey Road Equipment Modified feature was a fun race to watch also. Chris Hile raced his way to the front using the topside grip to gain an advantage that was never relinquished in spite of several cautions that closed the gap for Billy Decker, Larry Wight, Tim Sears Jr., to name a few top contenders trying to be in the right place on the right lap.

Justin Williams claimed his fifth Mod-Lite feature win over Clayton Brewer. Tom Mackey may have caused his “luck” to turn around this season. Coming off a win at Fulton last week he led several laps of his heat, and the feature, but slipped back to finish fourth. After a very challenging season mechanically a top five is a great finish.

Quinn Wallis won the 4-Cylinder Stock division over Ray Bechler. I had a chance to talk with Ray before hot laps about his own struggles with his Dodge Neon, and he admitted that he’s finally working out the electronic tuning issues that were slowing him down. Now that he’s finding some horsepower he can work on chassis set up to really get the car dialed in.

Saturday I went to Weedsport Speedway to cover the NOS Energy Drinks World of Outlaws Sprint Car Series supported by the 358-Modified division. A few trips through the pits to try to catch up with Outlaw drivers was pretty fruitful. Several drivers make a little time for me, some out of sincerity, some out of respect, maybe some out of a sense of obligation. A few of my favorites to chat with are Jason Sides, Kraig Kinser, and David Gravel. We seem to be building a trusting relationship, meaning they know I’m not out there for anything but to support them however they need. They’re always friendly, as are the majority of the teams.

One cool experience was getting to meet Aussie driver James McFadden and discovering he and I have past experience in BMX Freestyle dirt jumping, as we have both sought big air off the dirt mounds. He’s enjoying occupying the driver’s seat in the Kasey Kayne Racing Maxim chassis.

The Jason Johnson Racing hauler pulled in later than most, and that only gave me a short opportunity to introduce myself to Carson Macedo, and to share our roll as chaplains with him.

There were at least eight regional drivers there, with four running 410’s, and four with 360’s if my count is right.

Sheldon Haudenschild demonstrated the “chip off the old block” genetics he carries by using the turn two outside wall as a berm several times to turn off the corner and gain some momentum. On one such occasion he drive in high, used the wall to turn, and drove under Donny Schatz for the lead. It became his race to win, but a slight lack of patience with a lapped car in turn one on lap 33 sent Haudenschild spinning into the turn one wall. His car was raceable, and the scorers placed him to the tail of the lead lap cars, where he salvaged a top ten finish.

That mistake handed the lead to David Gravel, who was able to launch away from Schatz on the restart for a 2 lap dash to a ten thousand dollar payday. Brad Sweet found something in the last two laps that was enough to take second place, with Donny Schatz finishing third. Carson Macedo finished fourth with Fast Time award winner Logan Schuchart rounding out the top five. Danny Varin, a regular on the Lucas Oil Empire Super Sprint circuit gained nine spots before finishing sixth place. His performance against some of the best drivers in the Sprint Car world earned him the KSE Hard Charger Award.

Between beginning this column and finishing it I had to sit before the Lord to write a service for a former Four Cylinder Stock car racer. Raymond “Ray Ray” Herzog competed at the Brewerton and Fulton Speedway and loved racing.

On July 29th Ray succumbed to complications caused by diabetes.

As of the day of this writing, I will have the honor of leading the celebration of his life with his family and countless friends this evening. Keep his mother, sister, brother, daughters, son, and grand daughter in your prayers for the peace of God’s presence and the comfort of His Word to sustain them through this grievous time.

I know I got a little nostalgic at the beginning of this writing, but when you race, people stand apart who befriend you and help you through things when you don’t have the means or “know how” to over come them. The deepest love I have for the sport is the people, and the family environment that seems to exist everywhere you go. I actually used this sense of community in one of my recent messages to the church universally.

King David wrote a psalm about unity that really resonates with me.

He began by saying “Behold, how good and how pleasant it is For brethren to dwell together in unity!”

In its original language David was using Hebruisms to say how absolutely good and glorious it is for God’s people to experience His unity producing glory. He went on to say “It is like the precious oil upon the head, Running down on the beard, The beard of Aaron, Running down on the edge of his garments.” Psalms 133:2 NKJV

Again speaking in Hebrew allegory, David was describing the anointing by oil that symbolized a setting apart through consecration to God’s service or a setting apart to rulership over a people. In reference to the beard of Aaron, David was describing the anointing of the Holy Spirit in power that would come upon those set apart to minister to the Lord, and through the power of the Lord to His people. Aaron was Moses’ brother that God set over the Tabernacle as High Priest.

That being said, when people unite, especially by the unity created by abiding in God’s glorious presence, the power of God strengthens and sustains their union. This world needs that. The church needs that. If a bunch of people from every walk of life with a passion for dirt track racing can walk in unity, how much more the children of God if they would allow the manifested presence, power, and move of the Holy Spirit to touch, heal, deliver  and raise them up together? We can do this.

If you want or need anything from us shoot us an email at flchaplain@windstream.net, or message us on Facebook at our Finish Line Chaplain page.