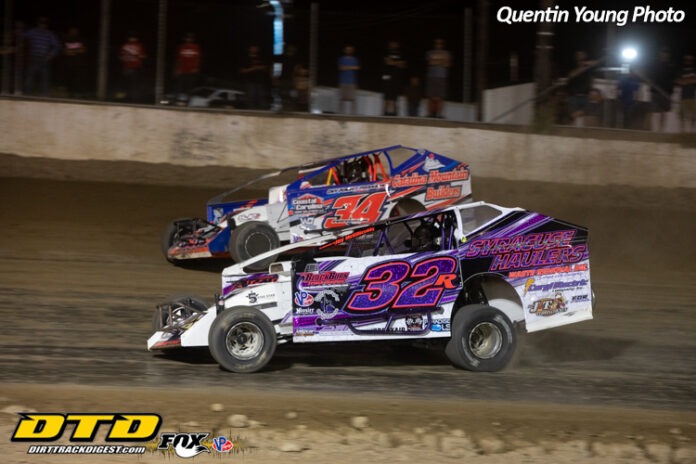 Fire to ice describes my weekend from Brewerton Friday, to Fulton Saturday, through my church services Sunday, into Monday morning when I received news that brought out some deep emotions like ice-water through my veins. Rather than redundantly report on the racing other have written about, in this column I’d rather make an effort to share some of the things some of the people at the tracks have revealed to me.

Let me begin with transparent honesty. In a conversation with one driver who is establishing himself as a respectable competitor I was moved by his sheer honesty about some things he’s experienced over the last few weeks, and how he recovered mentally from one of the worst weekends in his career to come out on top a week later.

As many if you know, Ronnie Davis III, knows as RD3, suffered severe damage to his big-block Modified a week ago after a steering component broke in hot laps. With the help from several other teams, his team was able to patch the car up enough to run the feature after scratching the heat race. RD was able to race a wounded mount into the top 10 finishing seventh. A week later he raced from deep in the field to win the 358-Modified feature at Fulton. It was refreshing to hear a driver describe exactly how hard it was to decide to run a car that was so severely damaged, only to have to replace it a week later.

“Let me be weighed on honest scales, That God may know my integrity. Job 31:6 NKJV”

Another thing I’ve seen is a level of humility, both in team owners, and drivers as they are not phased by their consistency and high rankings in the points. Larry Wight and Jimmy Phelps come to mind. These guys have swapped back and forth in the Tracey Road Equipment points over the season. Going into last Friday Larry was in the lead by four points, but a flat relegated him to the rear of the field to restart the race. While he was frantically grabbing real estate on a march toward the front, so was Jimmy. By virtue of the number of positions Phelps was able to keep between himself and Wight, Jimmy gained enough points to enter competition this Friday with only a 10 point advantage over Larry. Neither of these drivers have exhibited anything but humility when I’ve chatted with them about their season, or their lives in general.

A third thing I have observed and heard expressed is accelerated development. One seasoned veteran who races in the DOT Foods Sportsman division expressed how rapidly the next generation of youth has caught on to the recent advancements in rear chassis design. Watching a point battle between drivers separated by only eight points total between the top three at Brewerton confirms that point, since they all finished fifth, sixth and seventh last Friday in a tight battle for position. Each of those top three are only racing to win races. Points are less important but take care of themselves based on each of these three teams consistent success.

“One generation shall praise Your works to another, And shall declare Your mighty acts. Psalms 145:4 NKJV”

The fourth thing I encountered was an honorable level of respect when I interrupted a driver and crew chief for a brief talk when they were discussing changes to make to the car between their heat race and feature. Tim Sears Jr., stopped to talk with me for a few minutes while his Dad and crew chief went on with his business. “Timmer,” as us old timers call him, entertained a few questions about the way the new rear technology, that is only a few years into development, affects the handling and how it can be adjusted. He was polite, tolerant, and informative when asked questions pertaining to the physics and changeability. I’ve known the Sears family for a long time, having watched the romance between Tim Sr. and his wife Kathy bud and grow into a family who work very hard at everything they do, and succeed at it as well. I guess you could say I knew “Timmer’s” parents before he was a glimmer in their eyes.

Add to my experiences with people at the race tracks the amazing and overwhelming sense of family values and affection among track owners, employees, and support organizations. I began as a Finish Line Chaplain 25 seasons ago. My second season left me with a few uncertainties as one track owner pulled out of central New York, leaving the key holder to dispose of the real estate known as Fulton Speedway. Harvey and Joan Fink bought the facility from Eric Kingsley, and His uncle “Bub” Benway.

As a young minister with no clout I called upon Pastor David Wells, our founding Chaplain, to reach out to the Finks to see of the door for my service was still open. I was told to report to Harvey the next race. When we met at the track he greeted me cheerfully, but suspectingly. His exact words to me after our “meet and greet” were, “Pastor Wells speaks very highly of you, don’t screw it up.”

I laugh about that now but owe a lot of gratitude to Harvey for relying on the word of another man of God he had known for several years to open the door to me when it could have easily closed. Since that day he was always warm and open to share with me, even things he may have thought could have offended me. I believe its because we built a trust based confidence in one another.

Harvey, Joan, and every one of their children, in-laws, and grand children that worked tirelessly along side of them always made, and continue to make me feel like a part of the family at Brewerton and Fulton. The family atmosphere carried over into the Wight Family ownership of both facilities where I’m still honored to be called their spiritual leader.

When I received the news that Harvey Fink, 81, had crossed the finish line of this life to enter his eternal home, I wept, first because it hurt to hear I’d never see his mischievous smile, hear his cliché anecdotes, or ride beside him on his utility vehicle chatting about what was important to him most, his family.

“My flesh and my heart fail; But God is the strength of my heart and my portion forever. Psalms 73:26 NKJV”

I wept for his family, who extend far beyond his wife, children, in-laws, grand and great grand children. Harvey’s family became everyone in northeastern dirt track auto racing, and extended up and down the east coast to reach around the nation.

“He heals the brokenhearted And binds up their wounds. Psalms 147:3 NKJV”

I personally am blessed to have known Harvey, to have been received into his racing family, and to have learned from him more than I can express here. We at the Finish Line Chaplain Ministry want to offer our deepest condolences and prayers for everyone feeling the pain of this deep loss to our sport, and his personal family. We are here for you, and available anytime if you need anything to help you put the pieces of your broken heart(s) together.

“The Lord is near to those who have a broken heart, And saves such as have a contrite spirit. Psalms 34:18 NKJV”