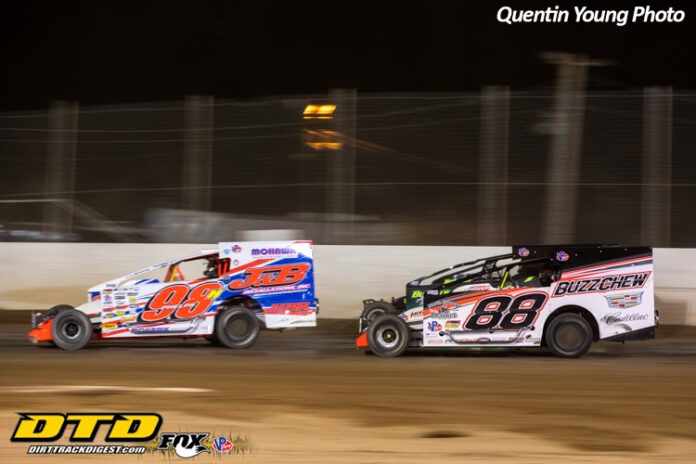 We’re at that late season push for all the big money shows. Fulton Speedway kicked off the beginning of October in a huge way with Outlaw Weekend last Friday and Saturday. Eighty-Seven Sportsman made the tow to try for 30 qualifying spots that paid $2,500 to the winner. In all, I believe 231 teams crammed into the pits on Friday night with seven classes and divisions on the ticket.

We saw larger than normal car counts in the Novice Sportsman, Mod-Lites, and Late Models, with Four-Cylinder Stocks returning to the high banks, along with Hobby Stocks making their second appearance this year. I didn’t count how many Modifieds showed up Friday for a chance to earn a guaranteed starting spot in the Outlaw 200 on Saturday.

I wish there could have been three of me to cover more ground and meet with more teams, but I did have some pretty cool divine appointments that God orchestrated for me.  That being said, the racing was pretty spectacular Friday night.

Six out of eight DIRTcar Sportsman heat races were won by Fulton regulars, but the invaders didn’t make it easy. Justin Williams and Chad Homan showed their classes why they are champions in their own right, with Justin winning the Mod Lite feature, and Chad taking another Late Model win. Mark Potter won the Novice Sportsman, while Mike Stone gave the four cylinder stocks more than they could handle. Former Street Stock  then Pro Stock driver Bob Buono took the trophy home for the 25 lap Hobby Stock class. I had to leave after the Late Model feature so that’s all I saw in a nut shell.

Saturday I arrived just after 11AM to make time to see as many teams as I could, but many were far too busy fixing or going through their racecars, or resting up after Friday night. Like Friday, I did have some great conversations, heard some great stories, and even reconnected with a former church member that moved out of town. I can’t say it often enough, but it’s the people of the sport that keep me going. No matter what roll they play, everyone involved is what makes racing great.

The 50 lap DIRTcar Sportsman feature was slowed by cautions for most of the first half. Once we got past the midway point from lap 30 on it was a race to remember. It came down to Chris Mackey defending His lead against Zach Sobotka, while Matt Janczuk worked his way forward from his 19th starting spot. As the top three exited turn four to begin the last lap they charged three wide down the front shoot with Janczuk on the bottom, Mackey in the middle, and Sobotka racing down the outside. Mackey had a wheel advantage over Janczuk entering turn one, and Sobotka looked to have a clean line around the top. Janczuk was running out of room and moved Mackey up with a hard “elbow” to the nerf, which shot him up into Sobotka, who suffered a flat left front and tucked back in to the groove to finish 5th. The fans didn’t seem to like Janczuk’s win, but he and his team and family didn’t let the booing stop them from enjoying the victory lane celebration. I guess when you win multiple track championships and series titles in one year you become the driver everyone loves to hate.

It was a heartbreaker weekend for Jimmy Phelps, who was put into the backstretch wall on the first lap of the first heat race for the Modifieds. He and his team made the repairs, regrouped, and raced through a consi. Jimmy started the 200 40th, and by lap 80 in the first half was in the lead adding lap money to go with his halfway bonus. Jimmy regained the lead at the start of the second half of the race, and found himself defending against Tim Sears Jr. and eventual winner Mat Williamson.  A late race incident sidelined the HBR 98 car of Phelps for the night. That left Sears and Williamson to duke it out for the win, with the Buzz Chew 88 car taking home the big check, adding another huge win to Mat Williamson’s resume.

Behind the scenes, this race is like no other I attend all year. The buffets of crockpot recipes and baked goods, breads, and beverages that teams, officials, and track employees all lay out for each other, the sights of fresh bodied racecars, the sounds varying from silence to the roar of 40 growling Modifieds, accompanied by the screams and cheers of thousands of fans make this event for me.

It’s on to cover the satellite shows for Super Dirt Week for me, beginning with Brewerton Tuesday for the Demon 100 Super DIRTcar Series Modified race, with DIRTcar Pro Stocks. Pastor Ed will be up on Wednesday, so we will “divvy up” the show’s to share the responsibilities the Finish Line Chaplains take on to serve the racing community.

As I wind this column down, I want to share something the Lord has emblazoned on my heart all year. From last weekend through the rest to the race season it gets very busy for many teams, and very costly if their efforts don’t match their passion to win. Race cars take a lot of abuse mechanically, and quite possibly, cosmetically as well. Every team works overtime to optimize handling and performance.  All of these things can take their toll on people as well as long hours, sporadic diets, and excessive living seem to be normal at weekend and week long events.

Our strength is from the presence of the Lord. How much we acknowledge and include Him dictates how much strength we gain according to the joy we experience in Him. In the book of Nehemiah we see the account of a time when Israel was under attack by a propaganda machine from a nearby army who sent messengers to harass the leadership and citizenry of Jerusalem to discourage the remnant of Israelites from rebuilding the city that was destroyed 70 years prior.

When Nehemiah the governor, and Ezra the Priest reached out to the people to encourage them, this is what was Nehemiah said:

Then he said to them, “Go your way, eat the fat, drink the sweet, and send portions to those for whom nothing is prepared; for this day is holy to our Lord. Do not sorrow, for the joy of the Lord is your strength.” Nehemiah 8:10 NKJV

The joy of the Lord is a product of being His presence, because King David the Psalmist said of the Lord “You will show me the path of life; In Your presence is fullness of joy; At Your right hand are pleasures forevermore. Psalms 16:11 NKJV

When we turn our minds away from the world, our problems, wrong thinking, circumstances, or concerns, and focus our attention on the Lord to seek His guidance, we are refreshed beyond our comprehension. The Apostle Peter was recorded by the Apostle Luke as saying, “Now repent of your sins and turn to God, so that your sins may be wiped away. Then times of refreshment will come from the presence of the Lord, and he will again send you Jesus, your appointed Messiah. Acts of the Apostles 3:19-20 NLT”

The real meaning of the word repent is to change your mind, which includes a turning away from worldliness toward God, like I just mentioned. Notice God promised through Peter that He will refresh us when we we seek His manifested presence personally.

Don’t burn out in the weeks to come because you allow human pride to separate you from God. He’s waiting for us to acknowledge and honor His presence so we can experience His majesty and glory. That’s the source of joy that strengthens us, refreshes us, and empowers us to keep on keepin’ on without growing weak or tired.

We’ll be at every event this week, so don’t hesitate to reach out if you need anything. Our email is flchaplain@windstream.net, and we can also receive messages on Facebook at Finish Line Chaplain.