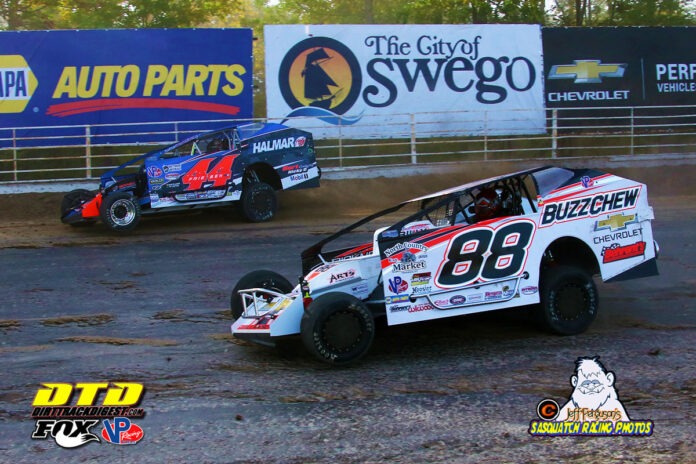 With Super DIRT Week 49 in the record books, I have some final thoughts and recognition I’d like to extend. First, thank you to World Racing Group CEO Brian Carter and your staff, including all of the great people at DIRTcar Northeast. All of you have been tremendous to the Finish Line Chaplain Ministry over the years and we appreciate the opportunity you give us to represent the Lord Jesus Christ to you and for you at your events. There are far too many other names to mention without fear of leaving someone out, but all of you deserve our thanks.

Also, we are grateful for Mike Mallett and the fine folks at Dirt Track Digest for printing the raw spiritual columns I write throughout the year as I have time. Last week you excelled in timely publications amid your extremely busy schedules and provided the best in depth look into the back stories of the competitors at all of the events that comprised Super DIRT Week 49.

To the race teams that showed open kindness to us, and gave us the opportunity to interrupt your daily routine as you worked tirelessly to prep, race, and even repair your equipment; we appreciate every moment you give us to bring spiritual guidance, encouragement, and our friendship. If you didn’t race, we wouldn’t be doing this.

Congratulations to Chad Jeseo for winning the 50-lap DIRTcar Pro Stock main event. I was thrilled to see a young gun win the DIRTcar Sportsman 75-lap feature from a 19th position starting spot, and enjoyed the emotion of the family team of Zach Sobodka in victory Lane as his grandfather and father stood by the car with an ecstatic smile. Stewart Friesen was the cream of the crop in Saturday’s Salute to the Troops 150 showing patience, intelligence, and skills that took advantage of every opportunity while conserving equipment.

The Billy Whittaker Cars and Trux 200 was a long race with much attrition. Mat Williamson won, but Peter Britten was the guy to beat until his day ended in the wall, and was not too happy with the guy that sent him there. No ramifications were assessed against Tyler Dipple by DIRT for the contact as Dippel’s car broke to bring out an ensuing yellow. Does that set a new precedent for future races?

Regardless, that Williamson is determined to win as many big name races as he can. Winning four out of five of the Super DIRT Week events after winning the Outlaw 200 at Fulton a few days earlier gives him a good head start.

I’m writing this sitting in an examination room at an Orthopedic Surgery Center after realizing my near 60 year old shoulder doesn’t like to do 30 year old things. It’s kind of funny, after blessing the Pro Stock drivers with the words, “have fun, be safe,” I decided to hop over the jersey barrier from the hot pits to the crew side of the wall. I took a few quick steps, hopped up, planted my right hand on top of the wall to catapult myself over, and I heard a POP, SNAP!

I’ll be okay, I dislocated that shoulder 15 years ago, and this time it popped right back in, but I’m having the soft tissue evaluated because I have no pendular or lateral range of motion without some major pain, and that’s a pain in butt because of my lifestyle. The doctor believes it’s a torn rotator cuff, so I’ll have to undergo an MRI and PT for a while to see if it recovers. I’m trusting God to touch and heal me as well. I believe He is able and willing.

I’m more concerned for a friend of mine who was always a faithful race fan with his family at Utica-Rome all the years I enjoyed my chaplaincy there. He’s fighting for his life with an acute form of pneumonia that has caused other issues with circulation. Keep Troy Reigler and family in your prayer until we see God deliver him from this illness.

I completely believe God is still my healer, and Troy’s, because all throughout His Word there are countless promises attesting to that, and God revealed Himself to Israel as YHWH Raphah, which means the LORD God who heals.

Praying for healing is most effective when we bring God’s Word to Him, so we have a leg to stand on before Him that He cannot deny.

“He sent His word and healed them, And delivered them from their destructions. Psalms 107:20 NKJV”

As a personal benefactor of God’s healing touch many times, it’s easy for me to believe for someone else to receive healing from God. Both the Old Covenant and the New Covenant describe divine healing as an act of the Messiah.

“But He was wounded for our transgressions, He was bruised for our iniquities; The chastisement for our peace was upon Him, And by His stripes we are healed. Isaiah 53:5 NKJV”

“For to this you were called, because Christ also suffered for us, leaving us an example, that you should follow His steps: “Who committed no sin, Nor was deceit found in His mouth”; who, when He was reviled, did not revile in return; when He suffered, He did not threaten, but committed Himself to Him who judges righteously; who Himself bore our sins in His own body on the tree, that we, having died to sins, might live for righteousness—by whose stripes you were healed.” 1Peter 2:21‭-‬24 NKJV”

Isaiah was describing a future event God was showing him prophetically, while Peter was sharing the manifestation of the prophecy of Isaiah as an eye witness to its fulfillment.

Notice Isaiah said, “by His stripes you are healed”; while Peter was quoting Isaiah with New Covenant inspiration from the Holy Spirit citing, “by whose stripes you were healed”.

The Prophet was stating in the present tense what God revealed through visions of the Messiah as if it were happening then, but Peter was inspired to shift into a past tense declaration that through the broken body of Jesus Christ healing was provided already.

It’s easy to believe after you’ve received it, but if we stand together in agreement for Troy’s healing, declaring God’s promises are true concerning Troy, I’m believing he will receive it.

“I will cry out to God Most High, To God who performs all things for me. Psalms 57:2 NKJV”

God said it, I believed it, that settled it.

If you have an emergency or crisis we can be reached by text at 315-857-1234; or by email at flchaplain@windstream.net. we can also be reached through Messenger on Facebook at Finish Line Chaplain.