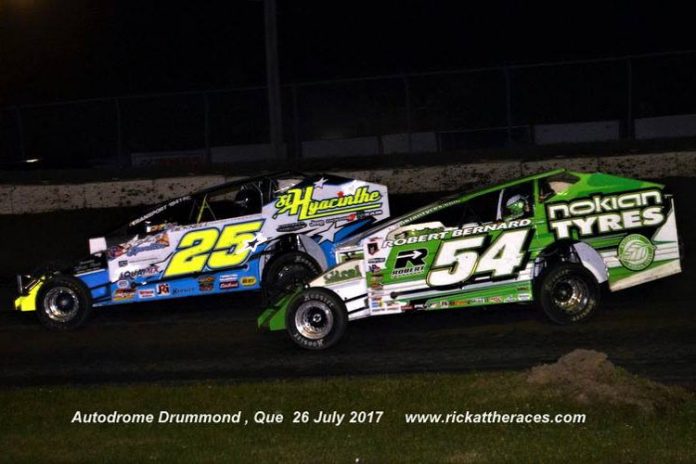 Racing can be a cruel sport at times. It can just beat you down. Steve Bernard experienced that on Tuesday night at Autodrome Granby. Bernard was racing his way to the front in the 100-lap Super DIRTcar Series feature when his motor went sour. He coasted to a stop. At that time he was into the top five and coming on the leaders. It was heartbreaking for sure.

“That one was really disappointing,” said Bernard on Wednesday night from the pit area at Autodrome Drummond. “Granby is really a pain in the ass for us. We like the track but we are never really good. Yesterday we were really fast. The car was gaining some speed on lap 30, 40 and it just went bad. It really pisses us off. We went in the garage at 12:30 at night to see what was going on. Parts of the piston were in the intake manifold, it was done. I had a night of sleep and this morning woke with a nice idea.”

When he got up a phone call was made and the real work began. Bernard dialed up good friend Dean Billings. Billings had loaned him an engine in the past which helped him win the 358-Modified DIRTcar Series a few years ago. He decided to give it a shot.  Billings had a big-block that wasn’t in use and offered it to Bernard to compete with on Wednesday night at Drummond. They met in the middle between Bernard’s Granby, Que., home and Billings shop in Brockville, Ont.

“I asked him if he could pass me his engine and he said yes,” cited Bernard. “He’s in Brockville so it’s about a three and a half hour drive. He said we’ll meet on the street somewhere. We brought back the engine at 11. We put that engine in. It’s never exactly a perfect fit. I tried to get everything to make it work. We finished the car at like 4:45pm in my garage in Granby.”


It’s roughly an hour from Bernard’s shop in Granby to Drummond. He loaded up and headed north as quick as he could. He missed warm ups as well as time trials. He had to start at the back of his heat race. He got a lucky break in the heat when Yan Bussiere broke to bring out the caution. On the restart he made an incredible move to get to third. That put him in the redraw. He picked up the number seven Frisbee.

From that seventh starting spot Bernard moved forward to put himself in a position to win. He battled with Steve Bernier and David Hebert for the lead before watching Matt Sheppard drive by. Sheppard ended up winning with Bernard losing second late to finish third.

“After that I tried to pass Matt back,” stated Bernard. “I went high in one and two, but Steve went to the rubber. I didn’t think he was so close to me. I tried it, but shouldn’t have. Sometimes you try something and it goes bad for you and good for him. It was a great race.”

He had a shot at the win, but considering how the day went that wasn’t expected. He just wanted a top ten. He was happy that everything played out the way it did for himself and for his crew who worked hard all day to put him in position to do what he did.

“It’s an incredible feeling,” Bernard commented afterwards. “I didn’t think we could be third because missing everything we thought we’ll try a top ten or whatever. We might start really far away. It’s great gratification for all my team. This is because of them that I’m able to race. They put a lot of hard work into making that car work for today. They were really pissed off my engine blew yesterday. They really made it up. Some of my guys missed work just to be able to make my car work. Everything is for them. For me, I’m living my passion. It’s just really cool.”

Bernard also made sure to express his gratitude to thank Billings on multiple occasions, without him none of what happened would have been possible.

“He’s a friend of mine,” said Bernard. “He’s a really, really nice guy. They are awesome people. He loves racing. I just want to say thanks.”