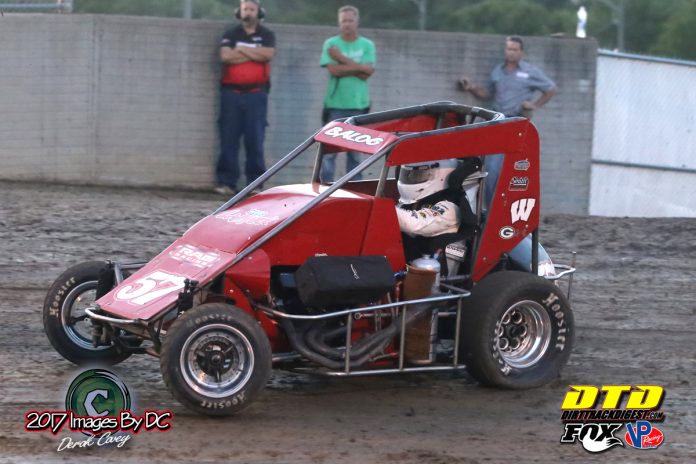 Although the event wasn’t what everyone was hoping for, Bill Balog was pleased with the outcome of Tuesday night’s Comet Classic for the Midgets at the Warren County Speedway. The Hartland, Wis., driver led all 25-laps to pick up the victory for car owner Bill Ecker.

“I’m not expected to win any of this stuff so it’s kind of neat,” stated Balog after the win. “It’s low pressure. Bill Ecker brings a good car and has a lot of good guys here helping. I got to thank him and Howard Law that sponsors him and this race.”

Balog was the latest arrival to the pit area after a run in with the law derailed his plans of making it the speedway on time. He got pulled over and wasn’t sure what to do from that point forward. A Smokey and the Bandit type decision was made and he arrived just in time to make the heat races.

“I got pulled over and the officer didn’t like the way I had my paperwork done I guess,” cited Balog. “He parked us for a while. We kind of gave up on it and were actually just going to hang out. He took off so we decided he was off work by the time we left. We decided to hit the road and get over here and tag the back of the feature or try to make the heat race and we did.”


He dominated the heat race before leading the entire distance of the main-event on the quarter-mile track. He was thankful that Robert Bell put the effort into hosting the race.

“I appreciate Robert Bell and all the sponsors that put on this event,” mentioned Balog. “We needed some more cars, but for whatever reason they didn’t show up. Hopefully he does it again.”

Balog wasn’t sure what the reason was why guys didn’t show up to support the show as he stated, “I’m not a promoter and I’ve never thought about it.”

The concept of running a Midget race the same week as the Knoxville Nationals and just after the Belleville Midget Nationals seemed like a great idea. Plenty of drivers were in town either to compete in the Nationals or to watch. Unfortunately on Tuesday night they didn’t bring their cars to compete. Only five full-size Midgets towed in for the event. To fill out the field 600 Micro Sprint Car drivers that competed in the companion winged event were allowed to tag the field with the wings removed. 13 drivers took the opportunity.

The race was run without a USAC or POWRi series sanctioning meaning no one was required to attend with $6,000 in posted winner’s share not being enough to draw drivers to the Warren County Speedway.

The track itself was perfect size for the Midgets. It’s a beautiful facility featuring long straightaways and banked corners with tons of room for three-wide action.

Hopefully changes can be made in 2018 to draw more cars as the fan count was decent. If a deal can be made with one of the sanctioning bodies I think that would boost the car count significantly. As a fan, I’d give it another shot and hope for a better turnout.