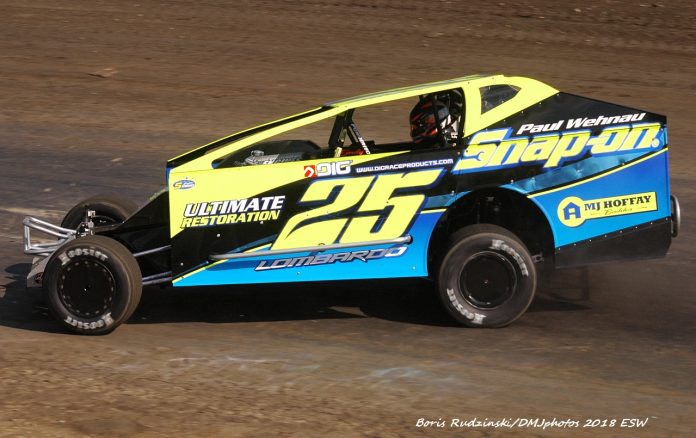 Saturday afternoon’s Eastern States 100 ended with the usual suspects taking the top few spots. Stewart Friesen won, but was disqualified for a weight infraction handing the top spot to Brett Hearn. By virtue of the disqualification, L.J. Lombardo was credited with a second place finish in the event. It was a career night for the 22-year-old driver from Danbury, Conn.

Lombardo drove the same small-block car that he won earlier in the season with at the Lebanon Valley Speedway. Lombardo did everything right. He had a great time-trial lap to lock himself into the show. He had some ups and down’s during the race, but at the end he crossed the line it what would eventually be the second spot.

“This is cool,” stated Lombardo. “It was a dream come true. I didn’t think to be honest with you when I fell back to seventh we would get back to the top five. I thought once the restarts started coming I’d follow the leader and maybe get a few spots here and there, but I just knew the restarts were everything. I just tried to take advantage of every caution. That is what we had to do.”

It wasn’t a win, but it was definitely the highest payday for Lombardo as he pocketed $10,000 for his efforts in a car owned by Frankie Harper.

“When you look at the paycheck here its $10,000 for second and that’s overdoes everything I’ve done,” cited Lombardo. “I don’t know if it compares exactly to a win. We won the first night I was in Frankie’s car. That was huge for us, huge for them. This is right up there though.”

For Lombardo the deal to drive Harper’s car is one of his first opportunities to just be a driver, to show up and just bring his helmet and fire suit to the races.

“To come here in your own car and you prepare everything is one thing,” he said. “I went to Frankie’s shop once to drop off the motor and he told me they’d take care of everything. You show up and bring your suit and let’s go racing. That is huge for me. I’ve never had that before. Everything I’ve ever raced I had to work on. I don’t mind working on them, but he told me he had it and I was just going to drive it. I love it. It is cool.”

Things didn’t go exactly as planned all weekend for Lombardo as he struggled on Friday night in Modified qualifying. He timed 38th quick of the 60 plus cars in attendance. He failed to make it through the heat race meaning he’ll run the B-Main on Saturday afternoon. That had him down, but his girlfriend surprised him by arriving to the track. That helped make Saturday even better.

“We sucked in our big-block,” stated Lombardo. “It was terrible out of gate. I was frustrated and my girlfriend showed up from Italy and honestly it boosted everything right up. I just told her we were going to put it on the pole today and we are going to win. That was my mindset when I came in here today. I knew when we sat on the pole for a while it was our race to win. It just didn’t fall our way, but I’ll take second.”

Lombardo now has to hope that he can have the same success in Sunday’s B-Main in order to qualify for Sunday’s 200. Regardless, no one can take away how satisfying his run on Saturday afternoon was. 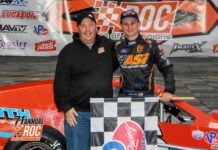 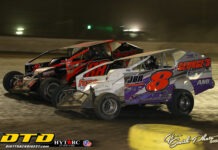