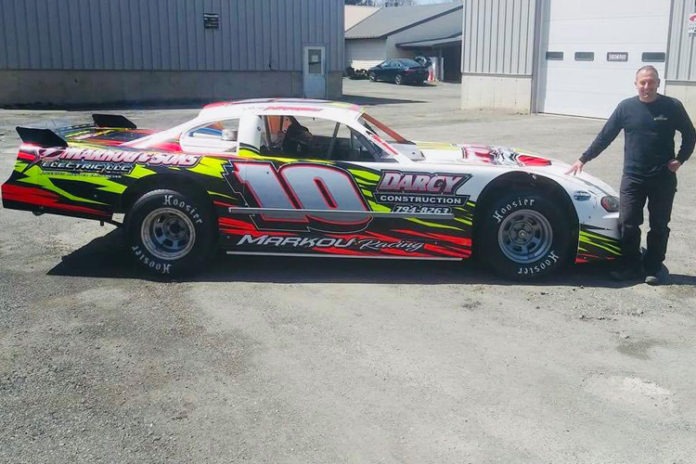 Tony Markou had a lot of people saying his name and wondering who he was last October during Super DIRT Week at the Oswego Speedway after he won the pole for the DIRTcar Pro Stock portion of the event.

In the finale, Markou had a hiccup early, but recovered nicely after going to the rear of the field to drive his way back to a respectable third-place finish in the final tally.  (You can watch the entire race from his in-car camera video on YouTube by clicking here.) Not bad for a guy that took a two-decade hiatus from the sport.  He ultimately feels he could have done more.

“To be out as long as we were, to go to place I’ve always dreamed to go to, whether it was Syracuse or Oswego, to be able to lay down a lap like that,” said the 53-year-old driver.  “The only thing better in my life would have been to win it from the back.  If cautions had fallen a little bit differently, we could have done that.  I’m not trying to sound conceited, but I think we had the fastest car and would have won it from the back.  It was still a storybook moment made even more special given the circumstances.

“Our return to the track after a 20 year absence was challenging enough, but many people are not aware of the physical complications I had battled just to walk again, let alone race competitively, so super dirt week was full of emotion for me, my family and the team”

For those unaware, in 2016 Tony sustained massive injuries from a 20-foot high fall from a ladder while working. The injuries and subsequent surgeries almost left him bound to a wheel chair and made a return to racing seem all but impossible.

“It was certainly a devastating blow. I shattered both of my heels, broke two vertebrae and went through four reconstructive surgeries to have plates and screws placed in my feet. I honestly didn’t think I would walk again and to be in the position I am now just proves that anything is possible.”

He stated after setting fast-time last October that he wanted to do as much racing as possible.  Prior to shut down due to government restrictions in dealing with COVID-19, Markou was ready.  Right now, his focus is on making sure everyone is safe during these trying times.

“First and foremost, addressing the Coronavirus pandemic with caution is paramount,” mentioned Markou.  “I’m just like every driver our there that wants to go racing, we would love to be racing, but at this point in time the welfare of the country takes precedent.

“After taking 20 years off I don’t think anyone wants to go racing more than I do, but at the end of the day we just have to deal with it and roll with it.  It is what it is.  As long as everyone is safe and healthy.”

Like everyone else, Markou feels the effects of the virus on his family run business Markou & Sons Electric.

“Financially this is a huge hit,” he said.  “We work balls to the wall every day, all day.  We have some big contracts that we were ready for when we got shut down.  It will be okay.  Once we get going again, we’ll back in the middle of that. The only issue is that it will be during the thick of race season.”

Over the off-season, the Brainard, N.Y., driver went all-in.  He now has two cars at his disposal for an ambitious schedule.

“We have two brand new cars ready,” stated Markou.  “We have the (Nick) Stone car from last year that was brand new.  I want to thank him for all his help.  The car has been amazing.  We got it from Travis Welch.  It’s all tuned up and ready to go.

“We’ve also added a brand new 2009 JACR.  We got it from P.J. Peters who had kept it in his barn, but it was brand new and unused from Andy Ryder at JACR.  We bought that over the off-season and that one is all set and ready to go too.”

His plans include events close to home at Albany-Saratoga Speedway as well as at the Lebanon Valley Speedway.  He’ll also compete in each DIRTcar Pro Stock Series race.

“With the Coronavirus impact, at this point we are going to run everything we can run,” mentioned Markou.  “Pretty much every series race we can get to.  I talked to Howie (Commander) today and he is ready to go to.  He’s going to do some things different there.  We’ll probably be at the (Lebanon) Valley or Fonda and Malta on Friday night and I’m hoping Glen Ridge on Sunday nights.”

After showing speed late last year, Markou is putting big expectations on himself and crew.  He feels they are ready to go on the road be a contender in each and every race entered.  He believes they have the team, car and talent to go and get things done.

“Every time I strap in, I strap in to win, but I know that is not possible from a numbers perspective,” commented Markou.  “I believe we have the car to win.  My crew-chief this year expects a lot more out of me than I do myself.  I would love to be able to give that to him.”

Markou made sure to thank all the sponsors that help make his return to racing possible. “I want to thank my sponsors for their support, Darcy Construction (special thanks to Joe and Pete Darcy), Wolberg Lighting Design & Electrical Supply, Protech Tire & Auto, Mike Slauson Automotive and, Markou & Sons Electric.

“I also want to send a huge shout out to my family and my crew; Glenn Ames, Fred Hoffman, and Mike Slauson. Without them, my dream to return to the track simply wouldn’t be possible.”

There is no doubt, when racing resumes, Markou is ready and raring to go.

To stay connected to his upcoming season and beyond, be sure to follow @TonyMarkouRacing on Facebook for updates, race videos, photos, and more