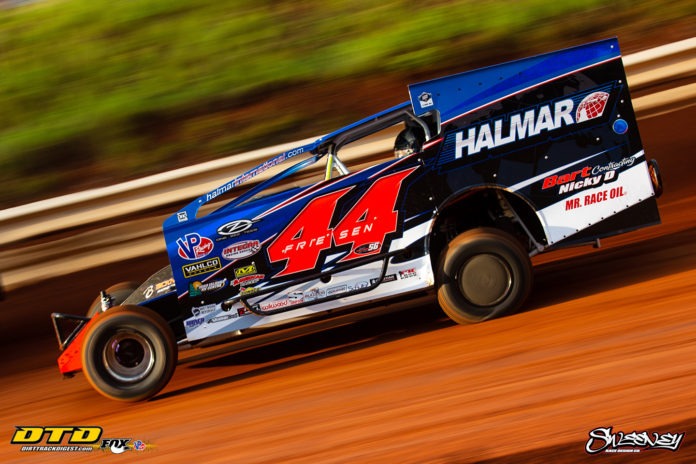 It was definitely unconventional, but at the end of the day Stewart Friesen ended up where he has so many other times in his career, in victory lane.  The Spraker’s New York driver regrouped after spinning and causing a pile-up early to race his way from the back to the front of the 30 car field in the Short Track Super Series ‘Return to Racing’ feature at the Tri-County Raceway.

Like everyone else, it was Friesen’s first time behind the wheel of a Modified since action back in March at the Georgetown Speedway.  He admitted afterwards he was feeling the effects, but he was happy to be back behind the wheel.

“I was getting pretty winded by the end of that,” said Friesen with a laugh.  “This is a such a cool deal to be able to come down here, thanks to Halmar for having the resources, to come down here to this.  It is really neat.  It is great for Modified racing.”

Friesen’s main way of staying in race shape during the layoff was running on a makeshift speedway built behind the family homestead.  He ran several laps in a go-kart while also turning some laps in a simulator in his efforts to stay in race shape.

“We built a pretty cool go-kart track behind the shop for Parker at the end of last summer,” mentioned Friesen.  “We’ve been racing the heck out of that.  I don’t know if it’s helped keep me in fighting shape or what.  Things happen fast.  We’ve had a bunch of karts out there.  I’m not a big gym guy or workout guy.  I believe I’m always the best after racing so I’ve been trying to stay in race shape.  I was able to do the simulator with TRD last week and I think that helped a little bit.”

As for spinning on the second lap, Friesen took full ownership for the incident.  It was evident he felt bad for causing the crash that ended the day for multiple drivers.

“Spinning out on the second the lap there in front of everybody, I just felt like a real piece of sh*t,” he said.  “It was weird.  It was kind of slimy on the bottom.  Then it was marbley.  Guys were all over the place. I was trying to keep my nose clean and ended up getting half spun and locking it up there.”

After spinning, Friesen went to the pits to have his No. 44 Bicknell checked out.  He returned to the speedway at the rear of the field.  Once he got back, Friesen found the lane that everyone, including track promoter Ray Cook, told him would be the fast way around.

“Ray Cook was telling me all day that you guys need to be higher,” stated Friesen.  “I introduced myself to him earlier and we chatted a little bit.  I watched him win at Utica-Rome (Speedway) when he was up there with Lucas Oil tour.  It is pretty neat to have a guy that won at Utica-Rome promoting this facility.  It’s a small world.”

In the closing laps of the main, Friesen tracked down Billy Pauch Jr., on the top of the speedway to take the checkers and the $3,000 that went along with it.

“I got some clear track,” commented Friesen.  “(Tyler) Siri and the Doctor (Danny Johnson) were battling on the bottom and I was able to be up top and get some momentum.  It was really good.  Little Billy (Pauch Jr.) was up there, but it worked out.  It’s a racey little joint.”

Friesen and company return to racing on Friday night at Tri-County Racetrack.  No fans are allowed but all the action can be seen on www.dirttrackdigest.tv.