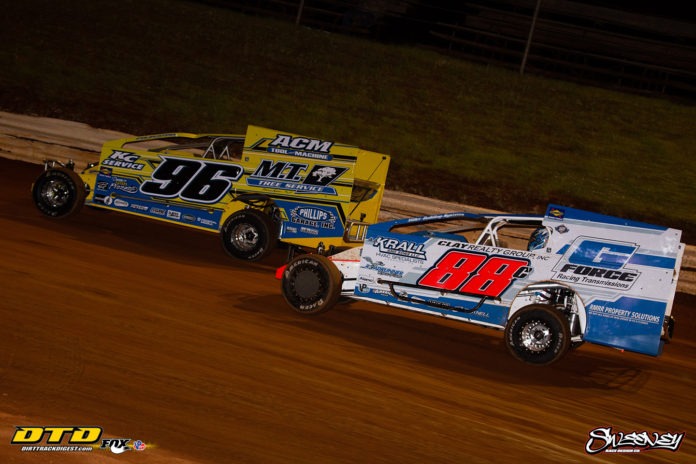 Jared Umbenhauer was surprise contender in the Short Track Super Series return to racing on Thursday night. The Pennsylvania standout blasted his way to the front, battled for the lead before losing a right rear tire late in the race. He returned for a 12th place effort at the checkered.

Making the run even more impressive was the fact that it was his first ever big-block Modified start and it came aboard the Rick Clay owned No. 88c.

“This is my very first actual big-block race,” cited Umbenhauer. “It is my first time in a big-block, first time in the car so we are pretty happy. I would have been so happy to come in third or in the top five. It just sucks we got the flat there. We had such a good car.”

Umbenhauer was able to make a few moves early while running the bottom of the speedway while others drifting up to the top. That allowed him to make some significant gains quickly in the feature.

“I started 10th and was just going to follow Stewy (Friesen) there on the first lap,” commented Umbenhauer. “They all shoved up and I had a good run. The caution came out two laps later and I knew I had a good car. I was fifth. I kept plugging away on the bottom. I could run in so good on the bottom and come off on the bottom. Everyone else it looked like they were on the high-side. I just kept digging.”

Ultimately Umbenhauer was sidelined by a right rear flat tire. He started fading in the closing laps. He knew something was wrong.

Billy Van Pelt looked to be a contender throughout the night on Thursday only to be involved in the incident that was caused when Stewart Friesen spun. Van Pelt just clipped him on the way by breaking the shock tower.

Peter Britten’s car sustained significant damage to the front and rear of his No. 21a in an early race crash.

Josh Delea lost a driveshaft in hot laps ending his night before getting a lap in the heat race.

Anthony Perrego was charging to the front mid-race only to have a tire go flat. He may have had more issues as sparks came out of the car prior to losing the right rear tire.

Billy Pauch Jr., may have had the best car in the field, but ignition issues plagued his chances for the win. He finished third.

Larry Wight shook down a brand new Teo car at the conclusion of the event while track promoter Ray Cook took some laps in a Super Late Model.

Billy Decker hopped into Jeremy Smith’s No. 46 for the feature event after engine woes in the No. 91.

Dillon Groover looked to have a top 10 run going until contact sent him bouncing off the wall on the frontstretch. Before he could get rolling again Jeff Strunk made impact ending the night for both drivers.

Racing resumes on Friday night at Tri-County Racetrack with the action available exclusively on Dirt Track Digest TV as fans are not allowed to attend.